Leaf of the fig tree, traditionally used in art to obscure nudity
This article is about the act of covering up. For the plant, see Fig. For the 1926 silent comedy film, see Fig Leaves. 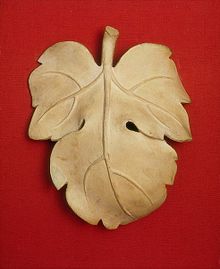 A fig leaf cast in plaster used to cover the genitals of a copy of a statue of David in the Cast Courts of the Victoria and Albert Museum. In the reign of Queen Victoria, display of male nudity was contentious and the Queen herself was said to find it shocking. The museum commissioned this fig leaf and kept it in readiness in case of a visit by the Queen or other female dignitaries: the fig leaf was then hung on the figure using a pair of hooks. Today, the fig leaf is no longer used, but it is displayed in a case at the back of the cast's plinth. 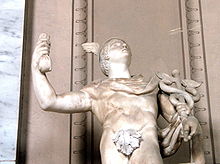 A statue of Mercury holding the caduceus in the Vatican, with a fig leaf placed over the genitalia. The fig leaf was placed there under the more "chaste" Popes; later, most such coverings were removed.

The expression "fig leaf" is widely used figuratively to convey the covering up of an act or an object that is embarrassing or distasteful with something of innocuous appearance, a metaphorical reference to the Biblical Book of Genesis in which Adam and Eve used fig leaves to cover their nudity after eating the forbidden fruit from the tree of the knowledge of good and evil. Some paintings and statues have the genitals of their subjects covered by a representation of an actual fig leaf or similar object, either as part of the work or added afterward for perceived modesty.

In Ancient Greek art, male nakedness, including the genitals, was common, although the female vulval area was generally covered in art for public display. This tradition continued in Ancient Roman art until the conversion of the Roman Empire to Christianity, when heroic nudity vanished. During the Middle Ages, only the unfortunate (most often the damned) were usually shown naked, although the depictions were then often rather explicit. Adam and Eve were often shown wearing fig or other leaves, following the Biblical description. This was especially a feature of Northern Renaissance art.

From about 1530, the developing reaction to Renaissance freedoms and excesses that led to the Council of Trent also led to a number of artworks, especially in churches or public places, being altered to reduce the amount of nudity on display. Often, as in the famous case of Michelangelo's The Last Judgement, drapery or extra branches from any nearby bush was used. This has been dubbed the "fig leaf campaign". For free-standing statues this did not work well, and carved or cast fig leaves were sometimes added, such as with the plaster copy of Michelangelo's David displayed in Victorian era London. The Adam and Eve panels on the Ghent Altarpiece, already equipped with fig leaves by Jan van Eyck, were simply replaced with 19th-century panels copying the figures but clothed. Many of these alterations have since been reversed, damaging some of the statues. 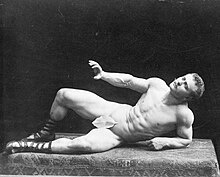 In this photo, Sandow portrays The Dying Gaul, a pose taken from an ancient Roman sculpture.

Eugen Sandow, often considered the first modern-day bodybuilder, was an admirer of the human physique. In addition to strongman sideshows, he performed "muscle displays" by posing in the nude—save for a fig leaf that he would don in imitation of statues he had seen in Italy as a boy.

The expression fig leaf has a pejorative metaphorical sense meaning a flimsy or minimal cover for anything or behaviour that might be considered shameful, with the implication that the cover is only a token gesture and the truth is obvious to all who choose to see it.

A metaphorical fig leaf is something visible but innocuous, as against a coverup in which the existence of something may be entirely hidden.

In the context of negotiation, an offer might be characterized as a "fig leaf" if that offer is actually a ploy to conceal a sinister plan. 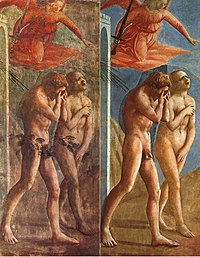 The Expulsion from the Garden of Eden, by Masaccio, before and after restoration. It was painted in 1425, covered up in 1680, and restored in 1980.