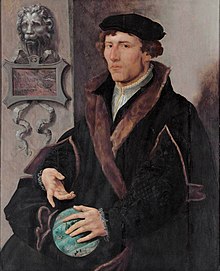 Gemma Frisius (/ˈfrɪziəs/; born Jemme Reinerszoon; December 9, 1508 – May 25, 1555) was a Dutch physician, mathematician, cartographer, philosopher, and instrument maker. He created important globes, improved the mathematical instruments of his day and applied mathematics in new ways to surveying and navigation. Gemma's rings are named after him. Along with Gerardus Mercator and Abraham Ortelius, Frisius is often considered one of the founders of the Netherlandish school of cartography and significantly helped lay the foundations for the school's golden age (approximately 1570s–1670s).

Frisius was born in Dokkum, Friesland (present-day Netherlands), of poor parents who died when he was young. He moved to Groningen and later studied at the University of Leuven (Louvain), Belgium, beginning in 1525. He received the degree of MD in 1536 and remained on the faculty of medicine of Leuven for the rest of his life where, in addition to teaching medicine, he also taught mathematics, astronomy and geography. His oldest son, Cornelius Gemma, edited a posthumous volume of his work and continued to work with Ptolemaic astronomical models.

One of his most influential teachers at Leuven was Franciscus Monachus who, circa 1527, had constructed a famous globe in collaboration with the Leuven goldsmith Gaspar van der Heyden Under the guidance of Monachus and the technical assistance of Van der Heyden, Frisius set up a workshop to produce globes and mathematical instruments which were praised for their quality and accuracy by contemporary astronomers such as Tycho Brahe. Of particular fame were the terrestrial globe of 1536 and the celestial globe of 1537. On the first of these Frisius is described as the author with technical assistance from Van der Heyden and engraving by Gerardus Mercator who was a pupil of Frisius at the time. On the second globe Mercator is promoted to co-author.

Gemma Frisius's famous 1533 diagram introducing the idea of triangulation into the science of surveying.

In 1533, he described for the first time the method of triangulation still used today in surveying (see diagram). Having established a baseline, e.g., in this case, the cities of Brussels and Antwerp, the location of other cities, e.g. Middelburg, Ghent etc., can be found by taking a compass direction from each end of the baseline, and plotting where the two directions cross. This was only a theoretical presentation of the concept — due to topographical restrictions, it is impossible to see Middelburg from either Brussels or Antwerp. Nevertheless, the figure soon became well known all across Europe.

Twenty years later, in ~1553, he was the first to describe how an accurate clock could be used to determine longitude. Jean-Baptiste Morin (1583–1656) did not believe that Frisius' method for calculating longitude would work, remarking, "I do not know if the Devil will succeed in making a longitude timekeeper but it is folly for man to try." In the event it took two centuries before John Harrison produced a sufficiently accurate clock. 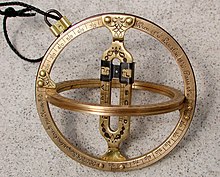 Frisius created or improved many instruments, including the cross-staff, the astrolabe, and the astronomical rings (also known as "Gemma's rings"). His students included Gerardus Mercator (who became his collaborator), Johannes Stadius, John Dee, Andreas Vesalius and Rembert Dodoens.

Frisius died in Leuven at the age of 46. According to an account by his son, Cornelius, Gemma died from kidney stones, which he had suffered from for a minimum of 7 years.

A lunar crater has been named after him. Gualterus Arsenius, the 16th century scientific instrument maker, was his nephew.