Global Entry is a program of the U.S. Customs and Border Protection service that allows pre-approved, low-risk travelers to receive expedited clearance upon arrival into the United States via the SENTRI and NEXUS lanes and through automatic kiosks at select airports. As of May 4, 2018[update], Global Entry was available at 53 US airports and 15 preclearance locations. By April 2018 more than 5 million people were enrolled in Global Entry and approximately 50,000 new applications for the program were being filed monthly.

There is a $100 non-refundable fee due at the time of application (before consideration for conditional approval). Unlike other trusted traveler programs, like NEXUS, the fee applies to infants and children (some credit cards reimburse this fee to both the cardholder and household family members).

During the interview, the applicant's fingerprints are captured and a digital photo is taken. Applicants are also given instructions on how to use the automated kiosk. The applicant is not approved on-site. Instead, the program (CBP) sends both an email notification and a U.S. Mail letter stating the outcome. The email directs applicants to login to their DHS TTP portal to view the outcome (though it's not necessary). The physical letter may contain a membership ID card (typically only included if requested via the DHS TTP web portal). However, the card is neither required for any aspect of the program and also cannot be used at kiosks (i.e., a passport is still required).

An advantage to viewing the status online is that, if approved, the Known Traveler ID ("KTN," required to be provided to participating airlines in order to receive TSA Precheck) is supplied and may be used immediately. Otherwise, the approved applicant has to wait for their KTN in the physically mailed letter.

Although an ID card serves no purpose during customs interactions, it can be used as a photo ID at U.S. airports. Further, airports without dedicated Precheck lanes occasionally allow cardholding members to bypass standard security: while they wait in line, a special paper is given and provided to the x-ray operator letting them know that the member does not need to remove liquids, computer or clothing. However, this practice is much more common for after-hours use (i.e., this process is often used once the staffed, dedicated Precheck lane is closed). The card is also NTHI-compliant, meaning it can be used at U.S. land and sea crossings into the U.S. from Canada and Mexico. The card is RFID enabled, so it can be used in Ready lanes at such border checkpoints (an RFID enabled card is required for SENTRI, NEXUS and Ready lanes because data must read wirelessly in advance to allow border guards to pre-process passengers before their vehicle arrives at the crossing station).

Once an application is approved, the applicant may use the Global Entry kiosk at any participating airport for a duration of five years. The five year period begins at the member's next birthday following approval. So for instance, an applicant with a birthday in October who is approved in May (i.e., 5 months prior to their birthday) will enjoy 5 years + 5 months of privileges.

Renewal of membership requires an additional fee (currently, the same $100 fee as charged for new applicants), and in some cases, renewal applicants are selected for a new interview. The TSA maintains a list of credit card issuers and loyalty programs that reimburse members' TSA PreCheck and/or Global Entry application fees.

Enrolled users must present their machine-readable passport or permanent residency card, and submit their fingerprints to establish identity. Users then complete a computerized customs declaration, and are issued a receipt instructing them to either proceed to baggage claim, or to a normal inspection booth for an interview. For subsequent entries at certain facilities (e.g., NEXUS), only a facial recognition scan is required instead of the passport (however users are always advised to travel with a passport when abroad). 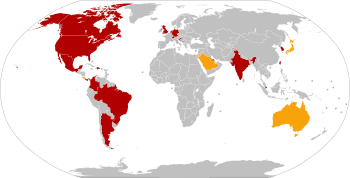 As of March 2020, nationals of the following countries may apply for Global Entry:

Nationals and permanent residents of Canada are not eligible to apply for Global Entry but they may apply for NEXUS, whose members have all benefits of Global Entry including using Global Entry kiosks.

Nationals of the Netherlands could apply for Global Entry before 2017, and existing members may continue using and renew the program. A new program to apply has been delayed for years but may be up within weeks.

Australia and Brazil are expected to start participation in Global Entry in 2020, after a trial with a small number of their nationals. Costa Rica has also negotiated participation in the program.

Any type of criminal conviction can disqualify a traveler from the Global Entry program: it is a risk-based system to facilitate the entry of pre-approved travelers. Three to five percent of travelers who sign up for the program are rejected; in such cases, they are generally told the reason for the rejection. Applicants may not qualify if they provide false or incomplete information on the application, if they have pending criminal charges or for any other legal/customs issues (particularly, but not exclusively, for customs-related offenses) such as, for example, having previously paid a fine for transporting a prohibited or undeclared item at a port of entry in the U.S. or even abroad.

Those whose Global Entry applications are denied have three ways to appeal: making an appointment to speak with a supervisor at a trusted traveler enrollment center, e-mailing the CBP Trusted Traveler Ombudsman, or filing a complaint through the Department of Homeland Security's Traveler Redress Inquiry Program.

CBP claims that less than one percent of active Global Entry participants' privileges are revoked. In these situations, an explanation for the revocation is not necessarily supplied.

New York's recently enacted immigrant sanctuary "Green Light Law" prohibits its state DMV from sharing criminal records with the federal Customs and Border Protection (CBP) or Immigration and Customs Enforcement (ICE) without a court order. (New York provides driver's licenses to undocumented immigrants, as over a dozen other states also do, though none of those other states placed as tight restrictions on the federal government's access to DMV records.)

New York did not immediately agree to these terms. The next day, state officials promised to sue the Trump administration. They said the lawsuit would argue that "the federal government’s actions were arbitrary and capricious, did not provide state residents equal protection and violated the state’s sovereign immunity," as The New York Times explained. New York attorney general Letitia James filed the lawsuit against CBP and DHS on February 10.

However, on February 12, Gov. Andrew Cuomo said he would comply with the Trump administration's request. He said he would propose either a legislative bill or a change to the New York state budget to grant the federal government access to New York's motor vehicle data (but only to the records of Trusted Traveler applicants and members, and only on a case-by-case basis). If the change is introduced by this method, it will likely not take effect for several months. This was to be done in exchange for the Trump administration reopening the Trusted Traveler program for New Yorkers. On February 13, Cuomo met with Trump at the White House; details of the meeting were not disclosed.

On July 23, 2020 the Department of Homeland Security reopened the Trusted Traveler programs for New York residents .

Members of Global Entry (along with members of other U.S. Trusted Traveler programs, NEXUS and SENTRI) may use TSA PreCheck on all participating airlines by entering their Customs and Border Protection ID number from their Global Entry card into their flight reservation information or into their frequent flyer account under "Known Traveler Number" (KTN). Note that any person, including TTP participants in GE, may be subjected to standard or enhanced screening at any time (i.e., denied PreCheck). However, denying PreCheck to GE members is rare and is case-by-case.

During the 1990s and early 2000s, the US Immigration and Naturalization Service operated INSPASS, a trusted traveler program designed to integrate with Canadian and European programs, at JFK and Newark Airports. INSPASS operated with a similar system, identifying travelers with their handprint. The program was discontinued in 2002 when the INS was merged with U.S. Customs to form U.S. Customs and Border Protection.

The Global Entry program was initially deployed at a small number of airports, including New York-JFK (Terminal 4), Washington-Dulles and Houston-Intercontinental. Following a good reception by travelers, the program was expanded to include Los Angeles International, Atlanta-Hartsfield, Chicago-O'Hare and Miami International Airport.

In May 2009, Global Entry membership was expanded to include Netherlands citizens who are also members of the Dutch Privium trusted traveler program under the FLUX (Fast Low-risk Universal Crossing) alliance. Present members of Global Entry are now permitted to apply to join the Privium program at Amsterdam-Schiphol International Airport allowing entry into the Schengen area. Members of NEXUS and SENTRI are also entitled to use Global Entry.

The * indicates there are no enrollment centers at these sites.

Analogous systems in other countries

Hong Kong's e-Channel is situated at all border crossing points. A person who holds a Hong Kong Identity Card (HKID) inserts the card into a slot to enter the first gate and then has their thumbprint scanned to pass through the second gate.

Japan's equivalent to the US program, Automated gate, costs 2200 JPY in the form of revenue stamps. It is similar in that a passport and fingerprint are scanned at a kiosk to pass.

Mexico's Viajero Confiable program is open to Mexican citizens and US citizens who are members of Global Entry. Prospective members must pass a background check and an interview with a Mexican immigration officer, and have fingerprints and iris scans taken. Kiosks are currently available at the Cancun, Los Cabos, and Mexico City international airports, but the Mexican government hopes to expand it to other cities in the near future.

Taiwan's e-Gate is a free automated entry system for citizens and certain classes of residents and frequent visitors. Users simply scan their travel documents at the gate and are passed through for facial recognition. Electronic fingerprinting is used when facial recognition fails. Registration is available at the immigration counter right at the port of entry.