The House of Stuart, originally Stewart, was a royal house of Scotland, England, Ireland and later Great Britain. The family name itself comes from the office of High Steward of Scotland, which had been held by the family scion Walter fitz Alan (c. 1150). The name "Stewart" and variations had become established as a family name by the time of his grandson, Walter Stewart. The first monarch of the Stewart line was Robert II, whose descendants were kings and queens of Scots from 1371 until the union with England in 1707. Mary, Queen of Scots was brought up in France where she adopted the French spelling of the name, Stuart.

In 1503, James IV married Margaret Tudor, thus linking the royal houses of Scotland and England. Elizabeth I of England died without issue in 1603, and James IV's great-grandson (and Mary's only son) James VI of Scotland succeeded to the thrones of England and Ireland as James I in the Union of the Crowns. The Stuarts were monarchs of Britain and Ireland and its growing empire until the death of Queen Anne in 1714, except for the period of the Commonwealth between 1649 and 1660.

In total, nine Stewart/Stuart monarchs ruled Scotland alone from 1371 until 1603, the last of which was James VI, before his accession in England. Two Stuart queens ruled the isles following the Glorious Revolution in 1688: Mary II and Anne. Both were the Protestant daughters of James VII and II by his first wife Anne Hyde and the great-grandchildren of James VI and I. Their father had converted to Catholicism and his new wife gave birth to a son in 1688, who was brought up a Roman Catholic and preceded his half-sisters; so James was deposed by Parliament in 1689, in favour of his daughters. But neither had any children who survived to adulthood, so the crown passed to the House of Hanover on the death of Queen Anne in 1714 under the terms of the Act of Settlement 1701 and the Act of Security 1704.

After the loss of the throne, the descendants of James VII and II came to be known as the Jacobites and continued for several generations to attempt to reclaim the English (and later British) throne as the rightful heirs, though since the early 19th century there have been no more active claimants from the Stuart family. The current Jacobite heir to the claims of the historical Stuart monarchs is Franz, Duke of Bavaria of the House of Wittelsbach. The senior living member of the royal Stewart family, descended in a legitimate male line from Robert II of Scotland, is Arthur Stuart, 8th Earl Castle Stewart.

The name Stewart derives from the political position of office similar to a governor, known as a steward. It was originally adopted as the family surname by Walter Stewart, 3rd High Steward of Scotland, who was the third member of the family to hold the position. Prior to this, family names were not used, but instead they had patronyms defined through the father; for example the first two High Stewards were known as FitzAlan and FitzWalter respectively. The gallicised spelling was first borne by John Stewart of Darnley after his time in the French wars. During the 16th century, the French spelling Stuart was adopted by Mary, Queen of Scots, when she was living in France. She sanctioned the change to ensure the correct pronunciation of the Scots version of the name Stewart, because retaining the letter "w" would have made it difficult for French speakers, who followed the Germans in usually rendering "w" as /v/. The spelling Stuart was also used by her second husband, Henry Stuart, Lord Darnley; he was the father of James VI and I, so the official spelling Stuart for the British royal family derives from him.

Principal members of the house of Stuart following the 1603 Union of the Crowns.

The ancestral origins of the Stuart family are obscure—their probable ancestry is traced back to Alan FitzFlaad, a Breton who came over to Great Britain not long after the Norman conquest. Alan had been the hereditary steward of the Bishop of Dol in the Duchy of Brittany; Alan had a good relationship with Henry I of England who awarded him with lands in Shropshire. The FitzAlan family quickly established themselves as a prominent Anglo-Norman noble house, with some of its members serving as High Sheriff of Shropshire. It was the great-grandson of Alan named Walter FitzAlan who became the first hereditary High Steward of Scotland, while his brother William's family went on to become Earls of Arundel.

When the civil war in the Kingdom of England, known as The Anarchy, broke out between legitimist claimant Matilda, Lady of the English and her cousin who had usurped her, King Stephen, Walter had sided with Matilda. Another supporter of Matilda was her uncle David I of Scotland from the House of Dunkeld. After Matilda was pushed out of England into the County of Anjou, essentially failing in her legitimist attempt for the throne, many of her supporters in England fled also. It was then that Walter followed David up to the Kingdom of Scotland, where he was granted lands in Renfrewshire and the title for life of Lord High Steward. The next monarch of Scotland, Malcolm IV, made the High Steward title a hereditary arrangement. While High Stewards, the family were based at Dundonald, South Ayrshire between the 12th and 13th centuries.

The sixth High Steward of Scotland, Walter Stewart (1293–1326), married Marjorie, daughter of Robert the Bruce, and also played an important part in the Battle of Bannockburn gaining further favour. Their son Robert was heir to the House of Bruce, the Lordship of Cunningham and the Bruce lands of Bourtreehill; he eventually inherited the Scottish throne when his uncle David II died childless in 1371.

In 1503, James IV attempted to secure peace with England by marrying King Henry VII's daughter, Margaret Tudor. The birth of their son, later James V, brought the House of Stewart into the line of descent of the House of Tudor, and the English throne. Margaret Tudor later married Archibald Douglas, 6th Earl of Angus, and their daughter, Margaret Douglas, was the mother of Henry Stuart, Lord Darnley. In 1565, Darnley married his half-cousin Mary, Queen of Scots, the daughter of James V. Darnley's father was Matthew Stewart, 4th Earl of Lennox, a member of the Stewart of Darnley branch of the House. Lennox was a descendant of Alexander Stewart, 4th High Steward of Scotland, also descended from James II, being Mary's heir presumptive. Thus Darnley was also related to Mary on his father's side and because of this connection, Mary's heirs remained part of the House of Stuart. Following John Stewart of Darnley's ennoblement for his part at the Battle of Baugé in 1421 and the grant of lands to him at Aubigny and Concressault, the Darnley Stewarts' surname was gallicised to Stuart.

Both Mary, Queen of Scots, and Lord Darnley had strong claims on the English throne, through their mutual grandmother, Margaret Tudor. This eventually led to the accession of the couple's only child James as King of Scotland, England, and Ireland in 1603. However, this was a Personal Union, as the three Kingdoms shared a monarch, but had separate governments, churches, and institutions. Indeed, the personal union did not prevent an armed conflict, known as the Bishops' Wars, breaking out between England and Scotland in 1639. This was to become part of the cycle of political and military conflict that marked the reign of Charles I of England, Scotland and Ireland, culminating in a series of conflicts known as the War of the Three Kingdoms. The trial and execution of Charles I by the English Parliament in 1649 began 11 years of republican government known as the English Interregnum. Scotland initially recognised the late King's son, also called Charles, as their monarch, before being subjugated and forced to enter Cromwell's Commonwealth by General Monck's occupying army. During this period, the principal members of the House of Stuart lived in exile in mainland Europe. The younger Charles returned to Britain to assume his three thrones in 1660 as "Charles II of England, Scotland and Ireland", but dated his reign from his father's death eleven years before.

In feudal and dynastic terms, the Scottish reliance on French support was revived during the reign of Charles II, whose own mother was French. His sister Henrietta married into the French royal family. Charles II left no legitimate children, but his numerous illegitimate descendants included the Dukes of Buccleuch, the Dukes of Grafton, the Dukes of Saint Albans and the Dukes of Richmond. 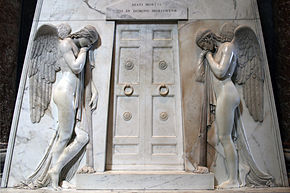 Monument to the Royal Stuarts in St. Peter's Basilica – Work of Antonio Canova.

These French and Roman Catholic connections proved unpopular and resulted in the downfall of the Stuarts, whose mutual enemies identified with Protestantism and because James VII and II offended the Anglican establishment by proposing tolerance not only for Catholics but for Protestant Dissenters. The Glorious Revolution caused the overthrow of King James in favour of his son-in-law and his daughter, William and Mary. James continued to claim the thrones of England and Scotland to which he had been crowned, and encouraged revolts in his name, and his grandson Charles (also known as Bonnie Prince Charlie) led an ultimately unsuccessful rising in 1745, ironically becoming symbols of conservative rebellion and Romanticism. Some blame the identification of the Roman Catholic Church with the Stuarts for the extremely lengthy delay in the passage of Catholic emancipation until Jacobitism (as represented by direct Stuart heirs) was extinguished; however it was as likely to be caused by entrenched anti-Catholic prejudice among the Anglican establishment of England. Despite the Whig intentions of tolerance to be extended to Irish subjects, this was not the preference of Georgian Tories and their failure at compromise played a subsequent role in the present division of Ireland.

The Royal House of Stuart became extinct with the death of Cardinal Henry Benedict Stuart, brother of Charles Edward Stuart, in 1807. Duke Francis of Bavaria is the current senior heir. However, Charles II had a number of illegitimate sons whose surviving descendants in the male line include Charles Gordon-Lennox, 11th Duke of Richmond; Henry FitzRoy, 12th Duke of Grafton; Murray Beauclerk, 14th Duke of St Albans; and Richard Scott, 10th Duke of Buccleuch. In addition, James II's illegitimate son, James FitzJames, 1st Duke of Berwick, founded the House of FitzJames comprising two branches, one in France and one in Spain. The last of the French branch died in 1967; the senior heir of James II's male-line descendants is Jacobo Hernando Fitz-James Stuart, 16th Duke of Peñaranda de Duero.

Monarchs of England, Scotland and Ireland

From the Acts of Union 1707, which came into effect on 1 May 1707, the last Stuart monarch, Anne, became Queen of Great Britain and Ireland. 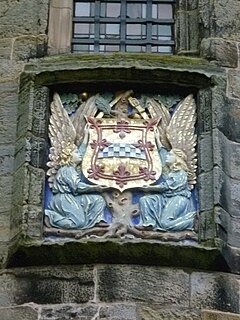 Armorial tablet of the Stewarts at Falkland Palace, Fife

Round provided a family tree to embody his essential findings, which is adapted below.

Retrieved from "https://en.wikipedia.org/w/index.php?title=House_of_Stuart&oldid=1008274366"
Uses material from the Wikipedia article House of Stuart, released under the CC BY-SA 3.0 license.