The area that is now Inner London was defined by the Registrar General as a collection of parishes called "London" and appeared in the 1851 Census. At the time the metropolitan area—commonly called the Metropolis—had its origins in the area of the Bills of mortality that had expanded from the tiny City of London into three surrounding counties over the previous several hundred years. The area become fixed in 1847 with the addition of Lewisham Poor Law Union and the parish of Hampstead. In 1855 the Registrar General area, with the addition of Penge, was used to define the district of the Metropolitan Board of Works. The Metropolis was also described as Inner London from the 1881 Census. In 1889 this area became the County of London. The area was adjusted in 1900 when Penge was transferred to Kent and South Hornsey was gained from Middlesex.

The statutory definition is used as part of the grant settlement used to finance local government. Newham London Borough Council campaigns for recognition as an Inner London borough council for central government grants, as this would have financial benefits for the borough. It is not currently considered an Inner London borough as, with the exception of North Woolwich, it did not form part of the County of London.

The statutory Inner London boroughs are:

The City of London was not designated as an Inner London borough, but the Corporation of London is usually classed as an inner London local authority.

The Office for National Statistics and Eurostat define Inner London differently, explicitly including the City of London, adding Haringey and Newham, but excluding Greenwich. The land area is 319 km2 (123 sq. miles) and the population in 2011 was 3,231,901.

Figures before 1971 have been reconstructed by the Office for National Statistics based on past censuses in order to fit the 2001 limits. Figures from 1981 onward are ONS midyear estimates (revised as of 2010).

After centuries of increase, the population of Inner London reached its peak of 4,998,237 in 1911. The area's population from World War I began a steady decline as that of Outer London continued to increase. The census of 1951 showed the damage inflicted by the 1940s Blitz as the population of Greater London switched into decline which was reversed in Outer London with house building and territory expansion whereas in Inner London continued. The war damage and early 20th century slums had physical and psychological hence property price effects and focus on New Towns and suburban development reflected a drive among urban planners for greener, less dense settlements. Inner London reached a post-War nadir, a population not seen since the early 19th century in 1981 having 2,550,100 residents, after which an upward trend ensued and Inner London residents numbered 3,231,901 in 2011 — 1,766,336 short of the 1911 peak.

For the purposes of the London Plan planning document produced by the Mayor of London, Inner London consists of the City of London, all the statutory Inner London boroughs, and Newham. 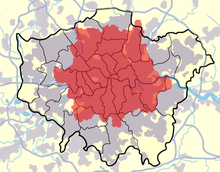 The area covered by the London postal district is sometimes referred to as 'Inner London'. However it is not coterminous with other definitions of Inner London as its area is somewhat larger and covers 624 km2 (241 sq. miles). The southern part of the London Borough of Lewisham as well as a small part of the Royal Borough of Greenwich fall outside its boundaries whilst 44 of its 119 districts are in Outer London and its irregular shape stretches to the Greater London boundary at Mill Hill and Scratch Wood and beyond it at Sewardstone.

From 1990 to 2000 London used two separate telephone dialling codes with one code designated for Inner London, however the area covered by this code was widely different from all of the above definitions and most of Greater London is now covered by a single 020 dialling code.

There are approximately 200,000 businesses with around 2,000,000 employees in Inner London. 56% of all private sector jobs in Greater London are located in Inner London. There is significant commuting of workers from Outer London and from outside Greater London. Much of the commercial activity is focused on Central London and Canary Wharf. 10% of public sector employment is focused on Westminster around the Government of the United Kingdom.