For other uses, see Intermountain (disambiguation). 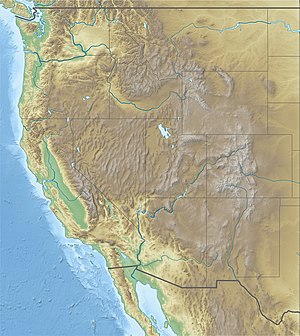 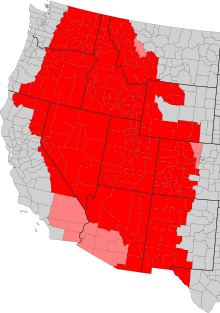 Map of the Intermountain West by county. Counties in red are always included, while counties in pink are only sometimes included.

The Intermountain West, or Intermountain Region, is a geographic and geological region of the Western United States. It is located between the front ranges of the Rocky Mountains on the east and the Cascade Range and Sierra Nevada on the west.

The Intermountain West has a basin and range and plateau topography. Some of the region's rivers reach the Pacific Ocean, such as the Columbia River and Colorado River. Other regional rivers and streams are in endorheic basins and cannot reach the sea, such as the Walker River and Owens River. These flow into brackish or seasonally dry lakes or desert sinks.
Portions of this region include:

The climate of the Intermountain Region is affected by location and elevation. The sub-regions are in rain shadows from the Cascade or Sierra Nevada ranges that block precipitation from Pacific storms. The winter weather depends on latitude. In the southern portion, winters are shorter, warmer and have less winter precipitation and snow. In the northern portion, winters are cold and moist. All areas have hot summers. North American Monsoon storms can occur in the region during the mid-summer, coming northeast from the Pacific Ocean and Mexican Plateau.

Some sections are agriculturally cultivated with water diversions for irrigation systems. Cattle ranching is practiced in the region as well. Cultivated crops include corn, potatoes, sugar beets, grass hay, and alfalfa, the latter two crops are used for livestock feed.

For thousands of years the Intermountain West has been the homeland for many Native American cultures, tribes, and bands. The 18th-century fur trade (northern areas), and 19th-century westward expansion of the United States brought irreversible cultural changes. The completion of the First Transcontinental Railroad through the region accelerated non-native settlements and development.

Historically, the Intermountain West area centered in Utah is associated with Latter-day Saint (Mormon) settlements, and the region has the highest percentage of LDS members in the United States currently. That region is also known as the Mormon Corridor.

Because of its low population density and diverse economy, the survivalist writers James Wesley Rawles and Joel Skousen both recommend the region as a preferred locale for "strategic relocation" and for building survival retreats, thus referring to it as the American Redoubt.