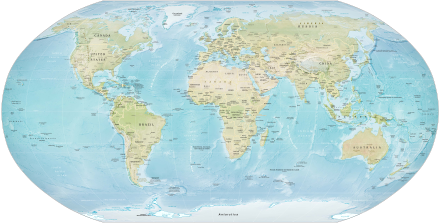 Physical map of Earth with political borders as of 2016

Geography (from Greek: γεωγραφία, geographia, literally "earth description") is a field of science devoted to the study of the lands, features, inhabitants, and phenomena of the Earth and planets. The first person to use the word γεωγραφία was Eratosthenes (276–194 BC). Geography is an all-encompassing discipline that seeks an understanding of Earth and its human and natural complexities—not merely where objects are, but also how they have changed and come to be.

The four historical traditions in geographical research are spatial analyses of natural and the human phenomena, area studies of places and regions, studies of human-land relationships, and the Earth sciences. Geography has been called "the world discipline" and "the bridge between the human and the physical sciences". (Full article...)

Outline of geography · Index
Refresh with new selections below (purge)

For editor resources and to collaborate with other editors on improving Wikipedia's Geography-related articles, visit WikiProject Geography. 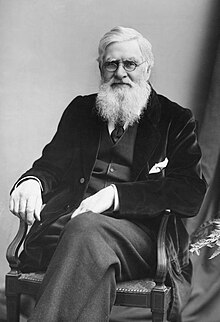 Alfred Russel Wallace OM FRS (8 January 1823 – 7 November 1913) was a British naturalist, explorer, geographer, anthropologist, biologist and illustrator. He is best known for independently conceiving the theory of evolution through natural selection; his paper on the subject was jointly published with some of Charles Darwin's writings in 1858. This prompted Darwin to publish On the Origin of Species.

Like Darwin, Wallace did extensive fieldwork; first in the Amazon River basin, and then in the Malay Archipelago, where he identified the faunal divide now termed the Wallace Line, which separates the Indonesian archipelago into two distinct parts: a western portion in which the animals are largely of Asian origin, and an eastern portion where the fauna reflect Australasia. (Full article...)

Did you know it about Geography?

You can read about interesting Wikipedia articles about places around you. 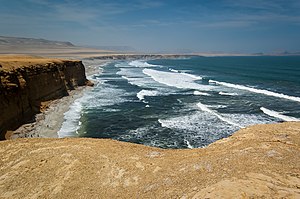 Coastal sea waves at Paracas National Reserve, Ica, Peru
The sea, the world ocean, or simply the ocean is the connected body of salty water that covers about 71% of Earth's surface (361,132,000 square kilometres [139,434,000 sq mi]), with a total volume of roughly 1,332,000,000 cubic kilometres [320,000,000 cu mi]. It moderates Earth's climate and has important roles in the water cycle, carbon cycle, and nitrogen cycle. It has been travelled and explored since ancient times, while the scientific study of the sea—oceanography—dates broadly from the voyages of Captain James Cook to explore the Pacific Ocean between 1768 and 1779. The word sea is also used to denote smaller, partly landlocked sections of the ocean and certain large, entirely landlocked, saltwater lakes, such as the Caspian Sea and the Dead Sea. (Full article...)

Retrieved from "https://en.wikipedia.org/w/index.php?title=Portal:Geography&oldid=989965604"
Uses material from the Wikipedia article Portal:Geography, released under the CC BY-SA 3.0 license.