Not to be confused with John Stamos.
American actor

John Allen Amos Jr. (born December 27, 1939) is an American actor known for his role as James Evans, Sr. on the CBS television series Good Times and for the 1977 miniseries Roots, for which he received an Emmy nomination. Amos's other television work includes The Mary Tyler Moore Show, a recurring role as Admiral Percy Fitzwallace on The West Wing, and the role of Washington, D.C. Mayor Ethan Baker in the series The District. Amos has appeared on Broadway and in numerous films in his four-decade career. He has been nominated for a Primetime Emmy Award and an NAACP Image Award. On film, he has played numerous supporting roles in movies such as The Beastmaster, Coming to America and Die Hard 2.

John A. Amos, Jr., was born on December 27, 1939, in Newark, New Jersey, the son of Annabelle and John A. Amos, Sr., an auto mechanic. He grew up in East Orange, New Jersey, and graduated from East Orange High School in 1958. He enrolled at Long Beach City College and graduated from Colorado State University, qualifying as a social worker with a degree in sociology. Amos also played on the Colorado State Rams football team. After college, he was a Golden Glove boxing champion.

In 1967, Amos signed a free agent contract with the American Football League's Kansas City Chiefs. Coach Hank Stram told him, "you're not a football player, you're a man who is trying to play football." Amos approached Stram with a poem he wrote about a mythical creature that passes the door of all players who are cut from a team. He read it to the team and received a standing ovation from all the players and coaches. Amos said Stram pushed him in the direction of writing after he was released from training camp. He returned to the Continental League, where he played that year with the Victoria Steelers. 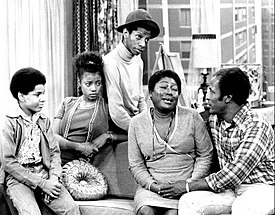 Amos became well known in his first major TV role, playing Gordy Howard, the weatherman on The Mary Tyler Moore Show, from 1970 until 1973. In 1971, he appeared with Anson Williams in a commercial for McDonald's. But he is best known for his portrayal of James Evans, Sr., the husband of Florida Evans, first appearing three times on the sitcom Maude before continuing the role in 61 episodes of Good Times from 1974 to 1976.

Although cast a hard-working middle-aged father of three, Amos was 34 when the show began production in 1973, only eight years older than the actor who played his oldest son (Jimmie Walker) and 19 years younger than his screen wife (Esther Rolle). Much like Rolle, Amos wanted to portray a positive image of an African-American family, struggling against the odds in a poor neighborhood, but saw the premise slighted by lower comedy, and expressed dissatisfaction.

During his tenure on Good Times, Amos openly clashed with the writers of the show, due to the scripts' lack of authenticity in portraying the African-American experience. This led to his dismissal in 1976. In a 2017 interview, Amos said he had told the writers, who, according to Amos, did not understand African-Americans, "That just doesn't happen in the community. We don't think that way. We don't act that way. We don't let our children do that.' "

In 1977, Amos appeared in the central role of the adult Kunta Kinte in the groundbreaking television miniseries Roots, based on Alex Haley's book of the same name. Amos was nominated for an Emmy for his performance. In 1980, he starred in the TV film Alcatraz: The Whole Shocking Story. Amos played an Archie Bunker-style character in the 1994 sitcom 704 Hauser, a modern spin-off of All In The Family, but it was canceled after only five episodes (in the series he played a different character than he did in the All in the Family spin-off Maude). He also portrayed Captain Dolan on the TV show Hunter from 1984 to 1985. He co-starred in the CBS police drama The District. Amos was a frequent guest on The West Wing, portraying Admiral Percy Fitzwallace, who serves as Chairman of the Joint Chiefs of Staff for most of the show. He played Buzz Washington in the ABC series Men in Trees. Amos co-starred with Anthony Anderson in the short-lived TV series All About the Andersons in 2003. In 2010, Amos also appeared as recurring character Ed on Two and a Half Men, and in 2016 as another recurring character, also (coincidentally) named Ed, on the Netflix sitcom The Ranch. He has guest-starred in a number of other television shows, including Police Story, The A-Team, The Cosby Show, The Fresh Prince of Bel-Air, In the House, Martin as Sgt. Hamilton Strawn (Tommy's father), Touched by an Angel, Psych, Sanford And Son, My Name Is Earl, Lie to Me, and Murder, She Wrote. He has also appeared as a spokesman for the Cochran Firm (a national personal injury law firm). Amos is the writer and producer of Halley's Comet, a critically acclaimed one-man play that he performs around the world. Amos performed in August Wilson's Gem of the Ocean on Broadway and later at the McCarther Theatre in Princeton, NJ.

Amos has won more TV Land Awards than anyone else, taking home trophies for his roles on The Mary Tyler Moore Show, Good Times and the TV miniseries Roots.

In 2020, Amos was inducted into the New Jersey Hall of Fame.

Amos is a veteran of the 50th Armored Division of the New Jersey National Guard and Honorary Master Chief of the United States Coast Guard.

Amos has been married twice. His first marriage, from 1965 to 1975, was to artist and equestrian Noel Mickelson, with whom he has two children: Shannon Amos, a writer/producer and founder of Afterglow Multimedia, LLC, and Grammy-nominated director K.C. Amos. His second marriage was to actress Lillian Lehman.

Amos has been a resident of Tewksbury Township, New Jersey.