John Cho (born Cho Yo-Han; June 16, 1972) is an American actor known for his roles as Harold Lee in the Harold & Kumar films, John in the American Pie film series, and Hikaru Sulu in the Star Trek reboot film series.

Early in his career, Cho also starred in the Asian American–centered films Better Luck Tomorrow (2002), Shopping for Fangs (1997), and Yellow (1998). In 2017, he received critical acclaim for his performance in the hit indie film Columbus. In 2018, he starred in the thriller film Searching, making him the first Asian-American actor in history to headline a mainstream thriller film in Hollywood. He was nominated for the Independent Spirit Award for Best Male Lead for his performance in Searching.

He also made history in American television as the first Asian-American actor cast as a romantic lead when he starred as Henry Higgs in the 2014 sitcom Selfie. In addition to his role in Selfie, Cho has had lead roles in series such as FlashForward and Off Centre, and recurring roles in Sleepy Hollow and Difficult People.

Born in Seoul, South Korea, Cho moved to the United States in 1978. He was raised in Los Angeles, where his family settled after living in Houston, Seattle, Daly City, California and Monterey Park, California. His father was a minister in the Church of Christ and was originally from North Korea. Cho graduated from Herbert Hoover High School, in Glendale, California, in 1990.

Cho attended the University of California, Berkeley. In 1994, he toured nationally for a stage production of Maxine Hong Kingston's The Woman Warrior by the Berkeley Repertory Theatre. He graduated in 1996 with a BA degree in English.

After graduation, Cho taught English at Pacific Hills School in West Hollywood, California, while acting at East West Players in downtown Los Angeles. There, he appeared in Edward Sakamoto's The Taste of Kona Coffee in 1996 and in Euijoon Kim's movie My Tired Broke Ass Pontificating Slapstick Funk in 2000.

Cho guest-starred on Charmed as a ghost in 1998 and was one of the stars of the short-lived situation comedy Off Centre from 2001 to 2002. He was a costar on the Fox sitcom Kitchen Confidential based on Anthony Bourdain's best-selling book. He had supporting roles in the sci-fi comedy Evolution directed by Ivan Reitman, Down to Earth starring Chris Rock, and Bowfinger with Steve Martin.

In 2002, Cho had a starring role in the ensemble cast of Justin Lin's Better Luck Tomorrow, a drama focusing on the travails of a group of Asian Americans living in Southern California who are academically successful but socially discontented, and as a result engage in wantonly violent, criminal behavior. It was well received by critics, with Elvis Mitchell of the New York Times describing Cho's character's "lazy magnetism of which he is charmingly aware". Later that year, the movie Big Fat Liar was released, in which Cho played a Hong Kong-based movie director. He refused to do the accent scripted for his character. The director worked with him to re-develop the role.

Cho had a successful starring role as Harold Lee in 2004's Harold & Kumar Go to White Castle and reprised the role in 2008's Harold & Kumar Escape from Guantanamo Bay which raked in $38 million at the theaters, and again in 2011's A Very Harold & Kumar 3D Christmas which made $35 million. Cho's role in the popular franchise was written specifically for him by Hayden Schlossberg, and Cho has recounted that when Schlossberg first approached him with the role, he was initially suspicious.

Cho appeared on July 2004 issue of KoreAm Journal and in September 2006 was cast in NBC's new comedy The Singles Table, but the series never aired due to changes in scheduling and production. In 2006 and again in 2009, Cho was selected as one of the sexiest men alive in People magazine. 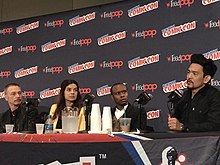 Cho, right, promoting The Exorcist at the 2017 New York Comic Con. Beside him are his co-stars (left to right) Ben Daniels, Zuleikha Robinson, and Kurt Egyiawan.

In 2007, Cho was added to the cast of Ugly Betty as a recurring character. Cho plays Kenny, a best friend of accountant Henry Grubstick (played by Christopher Gorham). Cho played helmsman Hikaru Sulu in J. J. Abrams's feature film Star Trek. Manohla Dargis of The New York Times praised him, along with Anton Yelchin, Chris Pine, and Zachary Quinto, for making their roles "ultimately and rather wonderfully their own".

Cho appeared in Nas's "Be a Nigger Too" music video along with various celebrities, and had a guest appearance on the sitcom How I Met Your Mother, in the episode "I'm Not That Guy" where he played a partner in an evil law firm. Of the latter, Staci Krause of IGN, wrote that Cho was "the scene stealer in this episode" and that she would "definitely like to see more of him" in the series.

From 2009 to 2010, Cho starred in the television series FlashForward as FBI Special Agent Demetri Noh. His character was originally slated to be killed off during what turned out to be the show's only season, but after his turn as Sulu in Star Trek boosted his popularity, the producers revised the show's storyline so that he survived, in an attempt to boost declining ratings.

Cho starred as Henry Higgs in the short-lived sitcom Selfie, a retooling of the play Pygmalion by George Bernard Shaw, becoming the first Asian American to play a romantic lead on a U.S. television series.

In 2018, Cho starred in the film Searching, playing a man combing social media for clues to his daughter's disappearance. He was the first Asian-American actor to headline a mainstream thriller in Hollywood. Also in 2018, he was presented with the Spotlight Award at the San Diego International Film Festival.

In April 2019, Variety reported that Cho had been cast as Spike Spiegel in a live-action version of the Cowboy Bebop series. However, production shut down when Cho suffered a knee injury in October and is not scheduled to restart until May 2020 at the earliest.

Cho is the lead singer for Viva La Union (formerly known as Left of Zed), a Los Angeles garage rock band composed of former Berkeley and USC students. They have one album, self-titled, while their song "Chinese Baby" is featured on the Harold & Kumar Escape from Guantanamo Bay soundtrack.

Cho married actress Kerri Higuchi in 2006. They have a son, born in 2008, and a daughter, born in 2013. As of 2015, he and his family reside in Los Angeles, California. He is close to his father, a former preacher, and would like to play a role in the story of his father's generation, growing up in North Korea through the Korean War.

Cho has indicated he has found freedom in being Harold in the Harold and Kumar films because the stoner character goes against the grain of Asian Americans onscreen. He has said he has experienced racism throughout his career in Hollywood and that he tries to take roles that do not perpetuate Asian stereotypes. When asked to do an Asian accent for Big Fat Liar, Cho refused. "I don't want to do this role in a kid's comedy, with an accent, because I don't want young people laughing at an accent inadvertently", he wrote. In a 2015 tweet he said, "Stop turning Asian roles white. It's bullshit and we all know it." On being the first Asian to play a romantic lead on a U.S. television series, he described it as being "revolutionary" and a "personal revolution" for him because of its uniqueness in Hollywood. "Asians narratively in shows are insignificant. They're the cop, or waitress, or whatever it is. You see them in the background. So to be in this position ... is bit of a landmark," he has said on the inability of Asians getting offered such roles.

In 2016, Cho was the face of the "#StarringJohnCho" social movement and hashtag campaign, created by William Yu, wherein Cho is Photoshopped onto existing movie posters as the male lead. The purpose of the project was to call attention to the lack of opportunities for Asian American actors in Hollywood.