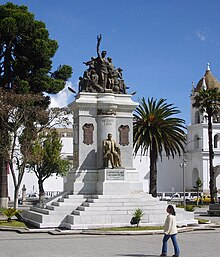 Monument to Vicente León on the main square of Latacunga

Latacunga (Spanish pronunciation: [lataˈkuŋɡa]; Quechua: Latakunga) is a plateau town of Ecuador, capital of the Cotopaxi Province, 89 km (55 mi) south of Quito, near the confluence of the Alaquez and Cutuchi rivers to form the Patate, the headstream of the Pastaza. At the time of census 2010 Latacunga had 98,355 inhabitants, largely mestizo and indigenous.

Latacunga took its independence from Spain on November 11, 1820.

Latacunga is an hour and half south from Quito on the Pan-American Highway. It was previously also on the old road from Quito to Guayaquil, and has a railway station between those cities. It is 9,055 ft (2,760 m). above sea level. Its climate is cold and windy, due to the neighboring snowclad heights, and the barren, pumice-covered tableland on which it stands. The active volcano Cotopaxi is only 25 km. away, and the town has suffered repeatedly from eruptions. Founded in 1534, it was four times destroyed by earthquakes between 1698 and 1798. The neighboring ruins of an older native town are said to date from the Incas Empire.

Latacunga's most noted food is chugchucaras, empanadas, plantains, popcorn, and tostado (a type of toasted corn). Often, food is mixed with ají, a type of condiment that can be mild to very spicy depending on its preparation.

The Latacunga economy is dependent on agriculture, floriculture and commerce. It has an international airport, the Cotopaxi International Airport, that is not used for international passenger use, but as an Air Force base and some special commercial flights. The local volcanic activity has led to the accumulation of pumice deposits which are currently mined, as well as the presence of natural sparkling water, which is bottled under the brand name San Felipe.

The airplane scene in the film Maria Full of Grace was filmed out of the Latacunga airport using local extras. The landscape seen from the plane is the area surrounding Latacunga. 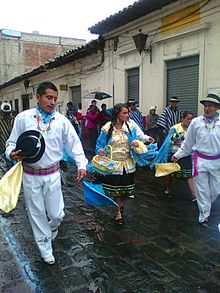 La Fiesta de la Mama Negra is a well-known traditional festival in Latacunga. It takes place twice a year, and originates from a mixture of indigenous, Spanish and African influences. The first one was organized in September by the people from the markets "La Merced y Del Salto" in honor of the Virgin of Mercy, Virgen de la Merced. The Virgin is venerated because she allegedly stopped the Cotopaxi Volcano eruption in 1742. Inhabitants of Latacunga call her Abogada y patrona del volcan, meaning "advocate and patron of the volcano".

The second celebration is a party which Latacunga's inhabitants celebrate every year on Ecuador's Independence Day. It is a parade with the participation of well-known people, the army, clergy and others.

Both of these fiestas include a lengthy parade of various cultural characters, all dressed-up in various colors. The 'mama negra' is the last person to pass through, which is the culmination of each parade. It is a person with their face painted in black, riding a horse, and spraying the crowd with milk. Homemade strong alcoholic drinks are freely passed between one another along the parade route, which can be quite chaotic, closing the road at times and making the route impassable.

Retrieved from "https://en.wikipedia.org/w/index.php?title=Latacunga&oldid=963620403"
Uses material from the Wikipedia article Latacunga, released under the CC BY-SA 3.0 license.