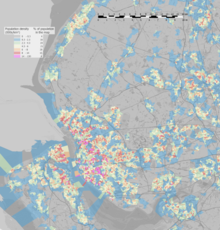 The Liverpool City Region is a combined authority region of England, centred on Liverpool, incorporating the local authority district boroughs of Halton, Knowsley, Sefton, St Helens, and Wirral. The region is mainly in the historic county of Lancashire and Cheshire. Depending on the definition used, the region's population is between about 1.5 million and 2.3 million.

Since 1 April 2014, the Liverpool City Region Combined Authority has become the top-tier administrative body for the local governance of the city region. Through the combined authority, the six districts pool their responsibilities over strategic policy areas such as economic development, transport, employment and skills, tourism, culture, housing, and physical infrastructure. No significant powers were devolved from central government.

The region's economic development is also supported by the Liverpool City Region Local Enterprise Partnership (LEP), established in 2010 as the private sector-led board comprising political and business leaders from around the city region.

The Liverpool city region was one of eight defined in the 2004 document Moving Forward: The Northern Way, as a collaboration between the three northern Regional Development Agencies.

On 13 March 2007, local government minister Phil Woolas announced plans to create a "cabinet" of the Leaders of the six councils (Halton, Knowsley, Liverpool, Sefton, St Helens and Wirral) in a form of regional devolution for what was termed the "Liverpool City Region". While a report in the Liverpool Daily Post newspaper on 3 June 2008 suggests a 'Super Cabinet' plan to boost economy in the city region.

In January 2009 an agreement was made that the local authorities of Halton, Knowsley, Liverpool, Sefton, St Helens and Wirral would form the Liverpool City Region, in a Multi-Area Agreement (MAA). The agreement led to a transfer, from central government, greater responsibilities in more than 10 areas covering employment, skills, transport, regeneration, housing and planning. Hazel Blears, the Secretary of State for Communities and Local Government said: "Today's 'Liverpool city-region' Multi-Area Agreement will mean Merseyside's six councils will no longer have to work alone on their economy, they will work from the same blueprint with more devolved powers to deliver jobs, training, welfare support and economic resilience."

Some definitions of the city region include a much wider area. The now-revoked North West of England Regional Spatial Strategy, while defining the city region for "the purposes of articulating RSS policy" as covering the six local authorities, also stated that it "extends as far as Chester, Ellesmere Port and Neston and West Lancashire." A 2011 report, Liverpool City Region - Building on its Strengths, by an independent working group led by Lord Heseltine and Terry Leahy, stated that "what is now called Liverpool City Region has a population of around 1.5 million", but also referred to "an urban region that spreads from Wrexham and Flintshire to Chester, Warrington, West Lancashire and across to Southport", with a population of 2.3 million. The European Union's ESPON calculated the Liverpool metropolitan area to be over 2.3 million people.

The LEP initiated Mersey Waters Enterprise Zone, which was set up in 2012. The enterprise zone contains two sites, Liverpool Waters and Wirral Waters.

The Liverpool City Region is strongly established as an important driving force in the economy of Northern England and as a strategic sea and air gateway to the European Union. It connects to North America, Ireland, the Isle of Man, Europe and beyond; serving international, national and regional markets, investors and visitors. Liverpool is the UK's fastest growing economy outside London, one of the UK's top three biomedical centres, and has the UK's second largest wealth management industry.

The region is largely monocentric with Liverpool as the dominant employment centre, however economic activity is widely spread across the six districts. Broadly speaking Liverpool is the commercial, cultural and transport hub of the region, with Sefton as the base of Seaforth Dock and tourist resort of Southport, Halton as the location for chemical, science, technology, logistics and distribution companies, and Knowsley, St Helens and Wirral providing key manufacturing and logistics for the area. The city of Liverpool itself has a compact Travel to Work Area reflecting its position on the North West Atlantic Seaboard and compactness of the surrounding urban area.

The city region is traditionally seen as a service sector economy, with its so called knowledge economy providing one third of the local employment base and over 40% of its total economic value. According to statistics for 2008, the Life sciences sector accounts for almost 10% of the region's economy, over 71,000 people are employed in financial and professional services, over 34,000 in manufacturing, and almost 24,000 in the creative and digital industry. The area is strongly connected to global markets, through its ports, airports and by its many multinational companies. World companies such as Barclays Wealth, Jaguar Land Rover, Maersk, Novartis, Santander, Sony and Unilever, all have a major base of operation in the locality.

Over the coming decades, the city region plans to deliver some of the UK's largest and most ambitious development and infrastructure schemes, representing a development value in excess of £30bn.

The Liverpool City Region has a highly advanced and extensive transport network, and is extremely well connected locally, nationally, and internationally by road, rail, sea and air.

The region is served by a network of 6 motorways (M58 to the North, M56 to the South, M6 & M62 to the East and M53 to the west). In addition, the M57 acts as an outer ring road and bypass for the city of Liverpool itself. The area has relatively low road congestion and its central location makes it a highly efficient base from which to service the whole country. Various parts of the region are separated by the River Mersey, and as a result, Wirral is connected to the centre of Liverpool via the Queensway Tunnel and Kingsway Tunnel, whereas Widnes and Runcorn are connected by the Silver Jubilee Bridge. A second six lane toll bridge under the name Mersey Gateway, to relieve congestion on the ageing Silver Jubilee Bridge, opened in 2017. The bridge is designed to improve transport links between Widnes and Runcorn and other key locations in the vicinity. 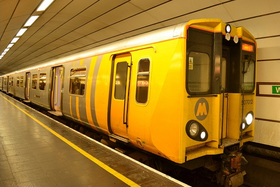 The sub-regional rail network is operated by Merseytravel, the combined Passenger Transport Executive and Integrated Transport Authority for Merseyside, and public sector body responsible for the coordination of public transport across Liverpool city region, except Halton. Merseyrail is an urban network of vital importance to the transport infrastructure of the city region operating almost 800 trains per day carrying over 100,000 passengers, on its network of 67 stations. The Merseyrail network is the most intensively used commuter network outside London and includes five underground stations in Liverpool City Centre and Birkenhead centre.

The UK government has insisted that the region will benefit from Britain's new high-speed rail network, due for completion by 2032, even though the new line will not extend into the region. Journey times to London from Liverpool would be cut by 32 minutes under the proposals. Pressure is being put on the government to extend high speed rail into Liverpool's city centre.

The city region is located on the North West Atlantic Seaboard, and is one of Northern England's most vital gateways for both freight and seafaring passengers.

The Port of Liverpool is one of Northern Europe's largest container ports and principal ports for trade with the United States and Canada. The port handles over 33 million tonnes of freight cargo per year and serves more than 100 global destinations including Africa, Australia, China, India, the Middle East and South America. Imports of grain and animal feed and exports of scrap metal for recycling are greater than any other UK port, and traffic crossing the quays includes timber, steel, coal, cocoa, crude oil, edible oils and liquid chemicals. Major investment, including a second container terminal dubbed ‘Liverpool 2' at Seaforth, will be designed to handle the largest Post-Panamax vessels and will double the port's capacity.

Almost three quarters of a million people travel on Irish Sea ferry services from Liverpool Docks and Birkenhead's Twelve Quays to Belfast, Dublin and the Isle of Man, and there is a growing number of cruise ships making day calls at the port. A new terminal at Prince's Dock is due to open in May 2012 to provide check-in, baggage drop and reclaim, as well as customs and border facilities for thousands of cruise liner passengers visiting the region, whilst Peel Ports have also planned a second cruise terminal as part of the Liverpool Waters project.

The Mersey Ferry offers regular commuter services between Wirral and Liverpool City Centre, with 684,000 passengers using the service in 2009–2010.

Global air connectivity to and from the region is provided by two international airports, Liverpool John Lennon Airport (LJLA), and Manchester Airport. Liverpool John Lennon Airport, situated 9 miles south of Liverpool City Centre, has seen massive growth over the last decade and handles well over 5 million passengers annually, making it one of the UK's top 10 busiest airports. Its two main airlines easyJet and Ryanair provide a wealth of low-cost air flights to and from most major European cities, and over 70 destinations are served by the airport overall, including regular flights to the Near East and North Africa.

Almost all the air traffic is generated by low-cost scheduled carriers to short-haul destinations across Europe and there are currently no long haul services operating from the airport, however, up until 2012 Dutch airline KLM had provided a daily link to its Amsterdam hub at Schiphol which offered a feeder service to over 650 long haul routes across the globe. Following the suspension of the service, airport bosses signalled that they will find an alternative European hub airport in the near future to continue to provide international connecting flights from Liverpool. This was later found in 2015 when Aer Lingus began direct flights to Dublin opening up routes to North America and Asia.

As part of LJLA's Master Plan, the airport is planning for substantial expansion and is forecast to handle more than 12 million passengers by 2030, as well as targeting permanent direct long haul flights and significantly larger terminal facilities.

The Liverpool City Region is covered by BBC North West and ITV Granada. Additionally, as of late 2013 the city region, along with Wigan and parts of Cheshire is covered by local TV channel Liverpool TV. The channel broadcasts over 35 hours of local content per week, along with a range of other content from across the network. The channel is available exclusively on Freeview channel 7 in the Liverpool City region and also nationally on Sky and Virgin TV.