This article is about the monastery in the Holy Land. For its namesake saint, see Sabbas the Sanctified. For the monastery in Rome, see San Saba, Rome.
"Sabaites" redirects here. For the legendary early Islamic sect, see Sabaʾiyya. For the ancient people, see Sabaeans. 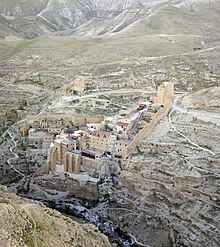 Mar Saba seen from the air.

The Holy Lavra of Saint Sabbas, known in Syriac as Mar Saba (Syriac: ܕܝܪܐ ܕܡܪܝ ܣܒܐ‎, Arabic: دير مار سابا‎; Hebrew: מנזר מר סבא‎; Greek: Ἱερὰ Λαύρα τοῦ Ὁσίου Σάββα τοῦ Ἡγιασμένου), is a Greek Orthodox monastery overlooking the Kidron Valley at a point halfway between the Old City of Jerusalem and the Dead Sea, within the Bethlehem Governorate of the West Bank. The monks of Mar Saba and those of subsidiary houses are known as Sabaites.

The monastery was founded by Sabbas the Sanctified in 483. Today, the complex houses around 20 monks. It is considered to be one of the oldest inhabited monasteries in the world, and still maintains many of its ancient traditions. One in particular is the restriction on women entering the main compound. The only building that women can enter is the Women's Tower, near the main entrance. The monastery is closed for visitors on Wednesdays and Fridays (the fasting days of the week).

Mar Saba was the former home of the famous Georgian monk and scribe Ioane-Zosime who moved before 973 to Saint Catherine’s Monastery taking several parchment manuscripts with him.

The monastery kept its importance during the existence of the Catholic Kingdom of Jerusalem established by Crusaders.

The monastery holds the relics of Saint Sabbas. The relics were seized by Latin crusaders in the 12th century and remained in Italy until Pope Paul VI returned them to the monastery in 1965 as a gesture of repentance and good will towards Orthodox Christians.

In 1504, the Serbian monastic community of Palestine, based out of the fourteenth century monastery of St. Michael the Archangel, purchased Mar Saba, which at the time was abandoned due to Bedouin raids. The Serbs controlled the monastery until the late 1630s, and the significant financial support the monastery received from the Tsar of Russia allowed them to run the monastery semi-independently from the Patriarch of Jerusalem, the monastery's nominal overseer (much to the vexation of the patriarchate). The Serbs' control of Mar Saba allowed them to play an important role in the politics of the Orthodox Church of Jerusalem, often siding with the Arabic laity and priests against the Greeks who dominated the episcopate. Serbian control of the monastery eventually ended in the 1600s when the monastery got into massive debt due to the simultaneous combination of a massive building program at the monastery and a cutting off of financial support from Russia due to the outbreak of the Time of Troubles. The Serbs were forced to sell the monastery to the Patriarch of Jerusalem in order to pay off their debts.

Mar Saba was also the home of St. John of Damascus (676–749; Arabic: يوحنا الدمشقي‎), a key religious figure in the Iconoclastic Controversy, who, around 726, wrote letters to the Byzantine emperor Leo III the Isaurian refuting his edicts prohibiting the veneration of icons (images of Christ or other Christian religious figures). John worked as a high financial officer to the Muslim Caliph Abd al-Malik; he eventually felt a higher calling and migrated to the Judaean desert, where he was tonsured a monk and was ordained a hieromonk (monastic priest) at the Monastery of Mar Saba. St. John's tomb lies in a cave under the monastery.

The monastery is important in the historical development of the liturgy of the Orthodox Church in that the monastic Typicon (manner of celebrating worship services) of Saint Sabbas became the standard throughout the Eastern Orthodox Church and those "Uniate" or Eastern Catholic Churches under the Roman pope which follow the Byzantine Rite. The Typicon took the standard form of services which were celebrated in the Patriarchate of Jerusalem and added some specifically monastic usages which were local traditions at Saint Sabbas. From there it spread to Constantinople, and thence throughout the Byzantine world. Although this Typicon has undergone further evolution, particularly at the Monastery of the Stoudion in Constantinople, it is still referred to as the Typicon of Saint Sabas. A tradition states that this monastery will host the last Divine Liturgy on earth before the parousia of Jesus Christ, therefore the last pillar of true Christianity.

Mar Saba is where Morton Smith purportedly found a copy of a letter ascribed to Clement of Alexandria containing excerpts of a so-called Secret Gospel of Mark, and was for several centuries home to the Archimedes Palimpsest.