Goidelic language which was spoken in Ireland, Scotland and the Isle of Man from the 10th to 12th centuries

Middle Irish, sometimes called Middle Gaelic (Irish: An Mheán-Ghaeilge), is the Goidelic which was spoken in Ireland, most of Scotland and the Isle of Man from circa 900–1200 AD; it is therefore a contemporary of late Old English and early Middle English. The modern Goidelic languages—Irish, Scottish Gaelic and Manx—are all descendants of Middle Irish.

The Lebor Bretnach, the "Irish Nennius", survives only from manuscripts preserved in Ireland; however, Thomas Owen Clancy has argued that it was written in Scotland, at the monastery in Abernethy. 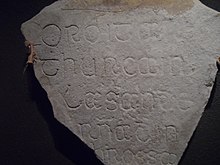 Middle Irish inscription from Clonmacnoise: Oroit ar Thurcain lasan dernad in chrossa: "Pray for Turcan by whom this cross was made."

The following is a poem in Middle Irish about Eógan Bél, King of Connacht.