The National Maximum Speed Limit (NMSL) was a provision of the federal government of the United States 1974 Emergency Highway Energy Conservation Act that effectively prohibited speed limits higher than 55 miles per hour (89 km/h). It was drafted in response to oil price spikes and supply disruptions during the 1973 oil crisis and remained the law until 1995.

While federal officials hoped gasoline consumption would fall by 2.2%, the actual savings were estimated at between 0.5% and 1%.

The law was widely disregarded by motorists nationwide, and some states opposed the law, but many jurisdictions discovered it to be a major source of revenue. Actions ranged from proposing deals for an exemption to de-emphasizing speed limit enforcement. The NMSL was modified in 1987 and 1988 to allow up to 65 mph (105 km/h) limits on certain limited-access rural roads. Congress repealed the NMSL in 1995, fully returning speed limit-setting authority to the individual states.

The power to set speed limits historically belonged to the states. Prior to the NMSL, the sole exception to this occurred during World War II, when the U.S. Office of Defense Transportation established a national maximum "Victory Speed Limit" of 35 miles per hour (56 km/h) to conserve gasoline and rubber for the American war effort. The Victory Speed Limit lasted from May 1942 to August 14, 1945, when the war ended. Immediately before the NMSL became effective, speed limits were as high as 75 mph (121 km/h). (Kansas had lowered its turnpike speed limit from 80 mph (130 km/h) before 1974.) Montana and Nevada generally posted no speed limits on highways, limiting drivers to only whatever was safe for conditions.

In 1973, Congress enacted a national speed limit of 55 mph (89 km/h). Some states, such as Washington, enacted lower speed limits.

As of November 20, 1973, several states had modified speed limits:

As an emergency response to the 1973 oil crisis, on November 26, 1973, President Richard Nixon proposed a national 50 mph (80 km/h) speed limit for passenger vehicles and a 55 mph (90 km/h) speed limit for trucks and buses. Also proposed were a ban on ornamental lighting, no gasoline sales on Sunday, and a 15% cut in gasoline production to reduce total gas consumption by 200,000 barrels a day, representing a 2.2% drop from annualized 1973 gasoline consumption levels. Nixon partly based that on a belief that cars achieve maximum efficiency between 40 and 50 mph (64 and 80 km/h) and that trucks and buses were most efficient at 55 mph (89 km/h).

The California Trucking Association, the largest trucking association in the United States, opposed differential speed limits on grounds that they are "not wise from a safety standpoint."

The Emergency Highway Energy Conservation Act was a bill in the U.S. Congress that included the National Maximum Speed Limit. States had to agree to the limit if they desired to receive federal funding for highway repair. The uniform speed limit was signed into law by Nixon on January 2, 1974, and became effective 60 days later, by requiring the limit as a condition of each state receiving highway funds, a use of the Commerce Clause of the United States Constitution.

A survey by the Associated Press found that, as of Wednesday, January 2, 1974:

That includes some states that voluntarily lowered their limits in advance of the federal requirement.

The 55 mph (90 km/h) National Maximum Speed Limit was made permanent when Congress enacted and President Gerald Ford signed into law the Federal-Aid Highway Amendments of 1974 on January 4, 1975.

The limit's effect on highway safety is unclear. Both during the time the law was enacted and after it was repealed, automobile fatalities decreased, which was widely attributed mainly to automobile safety improvements, owing to an increase in the safety of cars themselves, and the passage of mandatory seat belt legislation by all states except New Hampshire from the mid-1980s to the early 1990s. This decrease in fatalities from automobile accidents makes figuring out the actual impact of the law difficult. Although the vast majority of states reported fewer traffic deaths in 1974 compared with 1973, there were in fact three states where traffic deaths actually increased in 1974, 1975 and 1976, compared to 1973, notwithstanding the 55 mph (90 km/h) speed limit: Alaska, New Hampshire and Wyoming.

According to the National Research Council, there was a decrease in fatalities of about 3,000 to 5,000 lives in 1974, and about 2,000 to 4,000 lives saved annually thereafter through 1983 because of slower and more uniform traffic speeds since the law took effect. Later, the National Academies wrote that there is "a strong link between vehicle speed and crash severity [which] supports the need for setting maximum limits on high-speed roads" but that "the available data do not provide an adequate basis for precisely quantifying the effects that changes in speed limits have on driving speeds, safety, and travel time on different kinds of roads." The Academies report also noted that on rural interstates, the free-flowing traffic speed should be the major determinant of the speed limit: "Drivers typically can anticipate appropriate driving speeds." This is due, in part, to the strong access control in these areas but also is an acknowledgement of the difficulty of enforcing the 55 mph (90 km/h) speed limit in these areas.

A Cato Institute report showed that the safety record worsened in the first few months of the new speed limits, suggesting that the fatality drop found by the NRC was a statistical anomaly that regressed to the mean by 1978. After the oil crisis abated, the NMSL was retained mainly due to the possible safety aspect.

Insurance Institute for Highway Safety analysts wrote three papers that argue that increase from 55 to 65 mph (89 to 105 km/h) on rural roads led to a 25% to 30% increase in deaths (1/3 from increased travel, 2/3 from increased speed) while the full repeal in 1995 led to a further 15% increase in fatalities. In contrast, researchers at University of California Transportation Science Center argue that the interstates in question are only part of the equation, one also must account for traffic moving off the relatively more dangerous country roads and onto the relatively safer interstates. Accounting for this they find that raising rural speed limits to 65 mph (105 km/h) caused a 3.4% to 5.1% decrease in fatalities.

In 1998, the Transportation Research Board footnoted an estimate that the NMSL reduced fuel consumption by 0.2 to 1.0 percent. Rural interstates, the roads most visibly affected by the NMSL, accounted for 9.5% of the U.S.’s vehicle-miles-traveled in 1973, but such free-flowing roads typically provide more fuel-efficient travel than conventional roads.

Despite federal compliance standards mandated by Congress that no more than 50 percent of free-flowing traffic on 55 mph-posted highways exceed 55 mph from 1981 onwards, which required up to a 10 percent reduction in federal highway funding for states in noncompliance, by the 1980s traffic surveys showed the NMSL was widely violated:

In the April 2, 1987, Surface Transportation and Uniform Relocation Assistance Act, Congress permitted states to raise speed limits to 65 mph (105 km/h) on rural Interstate highways. In a bill that passed in mid-December 1987, Congress allowed certain non-Interstate rural roads built to Interstate standards to have the higher speed limits. As of December 29, 1987, the states of California, Florida, Illinois, Iowa, Kansas, Kentucky, and Oklahoma had applied for and been accepted into this program. The program was originally slated to last four years. A total of 40 states raised their speed limits to 65 mph on rural Interstate highway and non-Interstate rural roads built to Interstate standards by 1988, joined by Massachusetts (Turnpike only) in 1992, and by Maryland, New York and Pennsylvania in the summer of 1995.

Under the Intermodal Surface Transportation Efficiency Act of 1991, passed by Congress and signed by President George HW Bush on December 18, 1991, the 65 mph speed limit was made permanent for rural non-Interstate highways built to Interstate standards. It also declared a moratorium on Federal sanctions against states in noncompliance with the 55 mph (90 km/h) national speed limit for fiscal years 1990 and 1991, and directed the U.S. Department of Transportation to promulgate new compliance standards for the 65 mph rural freeways, as well as for all 55 mph (90 km/h) highways. As required by ISTEA, they were published in the Code of Federal Regulations 23 CFR Part 1260, but no further action was taken by USDOT against the states for speed limit noncompliance for the last few years the NMSL was still in effect until it was repealed in 1995.

Congress lifted all federal speed limit controls in the National Highway System Designation Act of 1995, returning all speed limit determination authority to the states effective December 8, 1995. Several states immediately reverted to already existing laws. For example, most Texas rural limits that were above 55 mph (89 km/h) in 1974 immediately reverted to 70 mph (110 km/h), causing some legal confusion before the new signs were posted. Montana reverted to non-numerical speed limits on most rural highways, but its legislature adopted 75 mph (121 km/h) as a limit in 1999; as a result, according to Insurance Institute for Highway Safety researcher Anne McCartt, "What's impressive is the huge drop in the percent of vehicles going very fast.... The proportion of vehicles exceeding 75 mph, the limit set [by Montana] in 1999, tumbled 45 percent. The proportion surpassing 80 mph plummeted 85 percent. Large trucks slowed, too." (She did not mention that the IIHS survey of traffic speeds on Interstate highways in 2006 she referred to, found Montana, as compared with New Mexico and Nevada, had the highest compliance with the 75 mph speed limit on rural interstates: 76 percent.) Hawaii was the last state to raise its speed limit when, in response to public outcry after an experiment with traffic enforcement cameras in 2002, it raised the maximum speed limit on parts of Interstates H-1 and H-3 to 60 mph (100 km/h).

Despite the repeal of federal speed limit controls, the 2011 maximum speed limits were on average lower than those of 1974:

Although traffic deaths and death rates have generally declined in the United States since 1989, highway safety advocates have long continued to assert that increases in state speed limits after the repeal of the National Maximum Speed Law have had a detrimental effect on highway safety, and they have conducted many studies including statistical analyses that claim to support this argument. For example, the Insurance Institute for Highway Safety declared that "each 5 mph increase in the maximum speed limit resulted in a 4 percent increase in fatalities. The increase on Interstates and freeways... was 8 percent. Comparing the annual number of fatalities in the 41 states [studied] with the number that would have been expected if each state's maximum speed limit had remained unchanged since 1993, [we] arrived at the estimate of 33,000 additional fatalities over the 20-year period [from 1993 to 2013]." 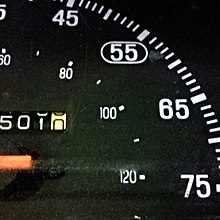 55 mph is emphasized on this dashboard.

On September 1, 1979, in a FMVSS that also regulated speedometer and odometer accuracy, the National Highway Traffic Safety Administration (NHTSA) required speedometers to have special emphasis on the number 55 and a maximum speed of 85 mph (140 km/h). Some manufacturers circumvented the rule by including extra lines beyond 85 to show higher speeds. However, on March 25, 1982, NHTSA revoked that Standard (FMVSS 127) entirely, eliminating speedometer and odometer rules because they were "unlikely to yield significant safety benefits" and "[a] highlighted '55' on a speedometer scale adds little to the information provided to the driver by a roadside speed limit sign."

The number 55 became a popular shorthand for the 55 mph speed limit. For example, a hand with a pair of fives in Texas hold'em poker is referred to as a "speed limit". Rock musician Sammy Hagar released "I Can't Drive 55", a hit single protesting the rule. The title of Minutemen's critically acclaimed double album Double Nickels on the Dime refers to the NMSL, and in jest, to the Sammy Hagar single. Films such as Smokey and the Bandit and The Cannonball Run were popular and humorous jabs at the NMSL.