Neve Zohar (Hebrew: נְוֵה זֹהַר‎) is a community settlement in southern Israel. Located on the junction of Highway 31 and Highway 90 (Zohar Junction), on the shores of the Dead Sea and 23 km from Arad by road, it falls under the jurisdiction of Tamar Regional Council. In 2019 it had a population of 56.

The village is the closest permanent settlement to the Ein Bokek Dead Sea hotel area and hosts the regional council's offices. It is the lowest village in the world. 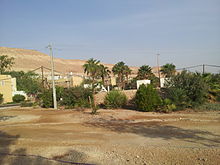 Neve Zohar was established in 1964 as a work camp for Dead Sea factory workers, although its immediate location was a major transport junction during numerous historical periods. It was named after the Zohar Stream, a wadi that flows into the Dead Sea.

The village also has a regional elementary school and a museum (Beit HaYotzer, lit. "house of the potter" or "house of the artist-creator") showing Dead Sea-related items. An unused airfield is situated slightly to the southeast of the village.)