No 1 Poultry is an office and retail building in London. It is located at the junction of Poultry and Queen Victoria Street, adjacent to Bank junction, in the City of London financial district. The building was designed by James Stirling for a site which then was owned by developer Peter Palumbo, and first assembled by Palumbo's father, Rudolph, in the 1960s. It was originally intended to be the site of a modernist office tower designed by Ludwig Mies van der Rohe in the manner of the Seagram Building in New York City, but that scheme was aborted following one of the great architectural and planning show-downs of the 1970s. A new design was created, Stirling's final design, in a postmodernist style with an outer shell of bands of rose-pink stone. The structure was built after his death. In 2016, following proposals to alter it, it received government recognition with a listing at grade II*, making it the youngest listed building in England.

The building was owned by Heinrich Feldman until he sold it to Perella Weinberg Partners for £110 million in 2014. 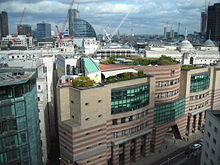 Coq d'Argent restaurant on the roof of No 1 Poultry

The present building at No 1 Poultry was completed in 1997, five years after architect Stirling's death and three years after construction began. It is a postmodern structure, with use of bold, perhaps unsubtle, forms and colours in a compact assembly. It is clad in pink and yellow limestone, fixed in stripes and blocks of colour whilst the interior atrium at the centre of the wedge-shaped site displays some of Stirling's characteristic acidulous colour play.

Like many notable postmodern buildings, the imagery is rich in references. For example, from the sharp apex of the site a keyhole shaped opening leads to a little-seen Scala Regia with a ramped floor, gold-leafed terminus and ancient Egyptian aura takes visitors into the heart of the building. Intended as site owner Palumbo's private entrance, this space is now little used: Palumbo sold the development before its completion. The turret above is sometimes likened to a submarine conning tower while the glazed two-sided clock is in concept and detail a direct quotation from the Fascist-era Palazzo delle Poste, Naples. Completed nearly two decades after the first designs were published, its reception among architectural critics suffered from the fact that the heyday of postmodernism was already over. Amongst the readers of Time Out magazine, it was voted the fifth worst building in London.

The building was announced as Grade II* listed on 29 November 2016 by Historic England. The listing had been proposed by the Twentieth Century Society to block proposals to alter the structure, and so had been opposed by the building's current owners.

The Mappin & Webb building by John Belcher in the centre of a picture taken in c. 1902 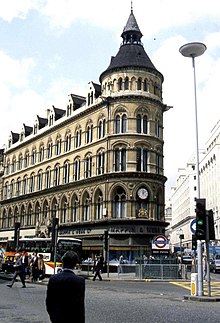 The Mappin & Webb building in 1993, which was demolished to make way for No 1 Poultry

The construction of No 1 Poultry required the fiercely fought and highly publicised demolition of a 19th-century neo-gothic listed building on the apex of the site, then occupied by crown jewellers Mappin and Webb. It had been designed by John Belcher in 1870.

An office building and public square by Mies van der Rohe was commissioned for the site in 1969, to be known as Mansion House Square. Van der Rohe's plans were criticised as "yet another giant glass stump, better suited to downtown Chicago than the City of London" by Prince Charles in his 1984 "carbuncle" speech to RIBA, and the plans were eventually scrapped.

While construction was underway, a major archaeological dig was undertaken by the Museum of London Archaeology Service, directed by Peter Rowsome. This excavation made several significant discoveries, including a wooden drain along the main Roman road. Using dendrochronology, this was dated to the year AD 47, suggesting this may be the date of the founding of Roman Londinium.

Construction was completed in 1997.

The building comprises a mixed use of retail and commercial office space.

A restaurant occupies the rooftop of No 1 Poultry and has a terrace and formal garden with panoramic City views for drinkers and diners. The rooftop featured in the opening ceremony of the 2012 Olympic Games in the segment 'Happy and Glorious' which saw Daniel Craig as James Bond transport Queen Elizabeth II to the Olympic Stadium by helicopter.

The rooftop terrace has gained notoriety in the City as the place where a number of people have committed suicide by jumping to the street below, a fall of around 80 ft. In recent years, six City workers have jumped from the terrace — in 2007, 2009, twice in 2012, in 2015, and in 2016.

Retrieved from "https://en.wikipedia.org/w/index.php?title=No_1_Poultry&oldid=999031766"
Uses material from the Wikipedia article No 1 Poultry, released under the CC BY-SA 3.0 license.