Enterprise Center is an 18,096-seat arena located in downtown St. Louis, Missouri, United States. Its primary tenant is the St. Louis Blues of the National Hockey League, but it is also used for other functions, such as NCAA basketball, NCAA hockey, concerts, professional wrestling and more. In a typical year, the facility hosts about 175 events. Industry trade publication Pollstar has previously ranked Enterprise Center among the top ten arenas worldwide in tickets sold to non-team events, but the facility has since fallen into the upper sixties, as of 2017.

The arena opened in 1994 as the Kiel Center. It was known as the Savvis Center from 2000 to 2006, and Scottrade Center from 2006 to 2018. On May 21, 2018, the St. Louis Blues and representatives of Enterprise Holdings, based in St. Louis, announced that the naming rights had been acquired by Enterprise and that the facility's name would change to Enterprise Center, effective July 1, 2018.

It is the home of the St. Louis Blues of the National Hockey League. In addition to the NHL franchise, the facility has hosted the annual Missouri Valley Conference Men's Basketball Tournament since 1995, commonly referred to as "Arch Madness," with the winner receiving an automatic berth to the NCAA Tournament. The University of Illinois and University of Missouri play their annual men's basketball rivalry game at Enterprise Center each season, typically on the Saturday before Christmas.

The building is operated by SLB Acquisition Holdings LLC, owner of the St. Louis Blues, under its chairman, Tom Stillman. 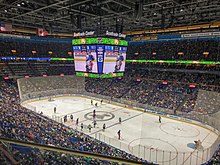 A picture of the interior of the Enterprise Center formerly Scottrade Center.

The arena opened in 1994 to replace Kiel Auditorium, where the Saint Louis University college basketball team had played, which was torn down in December 1992. The Blues had played in the St. Louis Arena prior to moving into Kiel Center in 1994; however, they would not play in the arena until January 1995 due to the lockout that delayed the start of the 1994–95 season. The first professional sports match was played by the St. Louis Ambush, an indoor soccer team. The building is currently known as Enterprise Center, after naming rights were sold in May 2018 to Enterprise Holdings. The Kiel name still exists on the adjoining parking structure and the building cornerstone. Signs for the nearby MetroLink stop have been changed to read "Civic Center", since the building has been renamed four times in its history.

The Opera House portion of the building was not razed when the original Auditorium was but remained closed since 1992, as members of Civic Progress, Inc., who promised to pay for the renovation of the Opera House, reneged on that promise, while opposing all outside efforts to achieve that renovation. In June 2009, the St. Louis Board of Aldermen voted 25–1 to subsidize the renovation and reopening of the Opera House under the direction of its new owners, Sports Capital Partners (who also own the Blues). The subsidies were funded by municipal bonds and state/federal historic tax credits. On July 12, 2010, it was announced that the name of the opera house would be changed to the Peabody Opera House, named after the company Peabody Energy. On October 1, 2011, the Peabody Opera House opened for the first time since the $79 million renovation. It is now known as the Stifel Theatre after naming rights were purchased by the locally-based investment bank.

Through its history, the arena has been known as Kiel Center until 2000, Savvis Center from 2000 to 2006, Scottrade Center from 2006 to 2018, and Enterprise Center since July 2018. For Blues games, Tom Calhoun serves as public address announcer and Jeremy Boyer is the arena organist. National anthems are performed by a rotating group of local singers and musicians. Previous anthem singer Charles Glenn retired in 2018 due to health concerns and a relocation to San Diego, but he has returned to St. Louis to sing on multiple occasions including the 2019 Stanley Cup run.

The largest crowd to attend an event at the arena was 22,612, which happened twice during the 2007 Missouri Valley Conference Men's Basketball Tournament. The largest non-sporting event crowd was for a Bon Jovi concert in May 2011 as part of the Bon Jovi Live Tour with 20,648 in attendance.

A three-phase renovation of the arena began in 2017 and was completed in 2019, with all building works being done in the hockey off-season to minimize schedule disruption. The first phase was largely composed of engineering upgrades (new lighting, sound, HVAC, and ice plant), improved IT infrastructure including free Wi-Fi for patrons, and rebuilt dressing rooms, as well as a new scoreboard and replacement of some lower-tier seating on the west end (where the Blues shoot twice) with "theater boxes". Phase two saw the replacement of all upper-tier seats, along with "theater boxes" being added to the east end, and a re-built lower-tier concourse with new club areas for premium ticketholders as well as a beer garden opening onto 14th Street. The third and final phase included the replacement of lower-tier seats and renovations to private boxes. 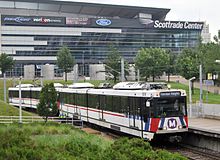 As the Scottrade Center

Blues management decried its former naming-rights deal with tech company SAVVIS, as much of the compensation was in Savvis shares, then riding high. However, when the tech bubble burst, the team was left with nearly worthless shares.

In September 2006, Scottrade founder Rodger O. Riney and chief marketing officer Chris Moloney announced a partnership with the St. Louis Blues hockey club and arena. The new name of the arena, Scottrade Center, was revealed in a joint press conference. Terms of the deal were not disclosed, but were described as "long-term and significant", by Moloney. Both Scottrade and the Blues said the agreement was "equitable" to both parties. Most of the signage and other promotions were changed to Scottrade Center prior to the first home game of the Blues on October 12, 2006. The Sports Business Journal in March 2007 described it as "one of the fastest naming rights deals in history."

On May 21, 2018, Enterprise Holdings, based in St. Louis, and the St. Louis Blues announced that beginning July 1, the facility would be known as Enterprise Center. The 15-year agreement calls for interior and exterior signage featuring the Enterprise logo.

The facility's seating capacity for hockey has varied since opening.

Many historic WWE moments have taken place at the Enterprise Center. Former WWE and World Heavyweight Champion Kane made his WWE debut at this arena in 1997 at the event Badd Blood: In Your House. At that same event, the first Hell In A Cell match took place between Shawn Michaels and The Undertaker, which received a five-star rating from the Wrestling Observer Newsletter. The Rock won his first WWE Championship in the building at the Survivor Series event in 1998. Chris Jericho won his first World Championship in this arena at the No Mercy event in 2001, and won his latest World Championship in the arena at the Elimination Chamber event in 2010. In 2005 John Cena was revealed here as the first draft pick for Monday Night Raw, where he would remain for most of his career. Dave Batista won his second WWE Championship at the Elimination Chamber event in 2010. The 1000th episode of Monday Night Raw was also held there. At the 2014 Survivor Series Sting made his official debut in WWE. In November 2018 on SmackDown, Daniel Bryan won his fourth WWE Championship. Arguably the most emotional wrestling card held at the Enterprise Center was "Raw is Owen", held in the aftermath of Owen Hart's death the previous night at Over the Edge across the state in Kansas City. That night, ten matches were held with all booking put aside, and many wrestlers and fans paid tribute to the popular Hart.