Scupi is an archaeological site located between Zajčev Rid (Зајчев Рид 'Rabbit Hill') and the Vardar River, several kilometers from the center of Skopje in North Macedonia. A Roman military camp was founded here in the second century BC on the site of an older Dardanian settlement. It became later Colonia Flavia Aelia Scupi and many veteran legionnaires were settled there. A Roman town was founded in the time of Domitian (AD 81–96) and Scupi became the chief center for romanizing Dardania. It was abandoned in AD 518 after an earthquake completely destroyed the city.

Scupi became the capital of Dardania, which extended from Naissus to Bylazora, in the second century BC. The Dardanians had remained independent after the Roman conquest of Macedonia, because they had supported the Romans, hoping to enlarge their territory in this way. It is not clear when the Romans finally annexed Dardania and it seems most likely that the Dardani actually lost independence in 28 BC. Scupi grew up as a colony of legionnaires, mainly veterans of the Legio VII Claudia in the time of Domitian (AD 81–96), even though several legions of Crassus' army of 29-28 BC, may already have been stationed there, before the official imperial command in this area was instituted. Scupi was included in Moesia Superior after the province was formed in AD 6. From 272 AD, it was a colony inside the Roman province of Dardania after Dardania was established. Scupi was ravaged several times by barbarians, in AD 269 by the Goths, in 5th century by the Huns and finally in the year 518 was completely destroyed by an earthquake. Life in Scupi stopped after the earthquake and it is assumed that the people from Scupi moved to live on Kale, a hill in the center of Skopje.

The moving of the city is often connected with the founding of Justiniana Prima. Justiniana Prima was a legendary city founded by Justinian I, who reigned over the Eastern Roman Empire in 527–565. The connection is based on the assumption that the village Taor which is located near Skopje is Tauresium, Justinian I's birthplace, and by the description of Justininiana Prima by Procopius that suits Skopje's fortress (Kale), the Old Bazaar and the aqueduct which are still landmarks of Skopje.

The excavations on the archaeological site started in the period between the two World Wars. Radoslav Gruić discovered the early Christian basilica in 1925 and the most important discovery was made by Nikola Vulić, a Serbian archeologist, when he found the ancient Macedonian theater. Nikola Vulić was the archeologist that published most about Scupi.
Excavations on the site were done in 1959–61 by Duje Rendić-Miočević that were published in 1981 and by Ivan Mikulčić published in 1971 and 1973.

In July 2008, a well-preserved statue of the Roman goddess Venus was found. The statue measures 1.7 metres (5.6 ft) in height. 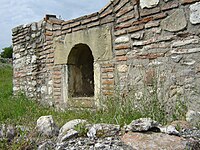 There are four building periods. The first is the time of the alleged camp of two legions from 168 BC. The second is the foundation of the Roman colonia that ended with the invasion by the Goths in AD 269. The third period is most distinguished and is represented by the remains of one civil basilica, a complex of baths (thermae) and one townhouse. The last, the fourth period that begins roughly after the invasion by the Ostrogoths from AD 472 or 489 is represented by remains of an early Christian basilica and a townhouse with apse. Scupi was completely destroyed in AD 518.
Today, only the early Christian basilica, the civil basilica, the baths and townhouses along the road are recognizable. The Roman theatre is completely decayed.

Retrieved from "https://en.wikipedia.org/w/index.php?title=Scupi&oldid=1007802825"
Uses material from the Wikipedia article Scupi, released under the CC BY-SA 3.0 license.