Not to be confused with American engineering professor Sheri D. Sheppard.
American actress

In 2009, she published the novel Permission Slips: Every Woman's Guide to Giving Herself a Break. In 2012, she appeared as a contestant on the 14th season of the reality competition series Dancing with the Stars. She started hosting the game show Best Ever Trivia Show on the Game Show Network in 2019.

Shepherd was born in Chicago, Illinois, the daughter of LaVerne (d. 1991) and Lawrence A. Shepherd (born c. 1947), a church deacon. She is the eldest of three sisters.

Shepherd's first television acting job was starring as Victoria Carlson in the short lived sitcom Cleghorne!, which aired for one season on The WB in 1995. She told Ebony in 2018, "That was the first job that I booked and I was still a legal secretary. My agent told me, 'You can quit your job.' I had that big break ... and then it was canceled. I lost my apartment, my car was repossessed and I was homeless for a year. I slept on everybody’s couch. In this business, it's very uncertain. You can be working one day and not working the next."

Shepherd later became recognized for recurring roles on the sitcoms Suddenly Susan, Everybody Loves Raymond, and The Jamie Foxx Show in the late 1990s, before starring in the show Less Than Perfect in the lead role of Ramona Platt from 2002 to 2006. From 2007 – 2013, she had a recurring role as Angie, the wife of character Tracy Jordan, on the NBC sitcom 30 Rock. In 2009, she starred for one season in Lifetime Television's Sherri, a sitcom about Shepherd's life. She recurred as Daphne during the final season of How I Met Your Mother in 2013. In the same year, Shepherd appeared on Broadway in Rodgers and Hammerstein's musical production of Cinderella. From 2017 to 2018, Shepherd portrayed Anne Flatch in NBC's mockumentary legal comedy series, Trial & Error.

Shepherd has appeared as a guest host and contestant on several television shows such as Who Wants to Be a Millionaire, Rachael Ray, and To Tell The Truth. She co-hosted the 35th Daytime Emmy Awards on June 20, 2008. Shepherd also hosted Nickelodeon's NickMom Night Out special from 2013 to 2014, Shepherd hosted Best Ever Trivia Show on Game Show Network for 65 episodes, beginning on June 10, 2019. 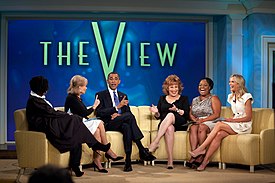 In 2006, Shepherd became a frequent guest co-host on ABC's daytime talk show The View. She became a permanent co-host in 2007, debuting in September. Since leaving The View in 2014, Shepherd has continued to make several appearances on the show as a guest host and "lead contributor" throughout 2015 and 2016.

Shepherd was criticized after one 2007 broadcast of The View. The show was often filmed "live", with little or no editing. She stated she did not "believe in evolution. Period." Co-host Whoopi Goldberg asked her, "Is the world flat?" Shepherd responded, "I don't know," and expanded that she "never thought about it". Shepherd later referred to her statement as a "brain fart" brought on by nerves. Barbara Walters and Shepherd talked after that episode: Walters said, "Dear, the Earth is round", and Shepherd responded with: "Barbara, I know that!"

Similar criticism erupted after the December 4, 2007, broadcast of The View when, during a discussion initiated by Joy Behar about Epicurus, Shepherd attempted to assert that Christians existed in classical Greece, and that the Greeks threw them to the lions. When confronted on this point, she further claimed that "Jesus came first" (before Greeks and Romans) and stated, "I don't think anything predated Christians", to which Behar responded: "The Jews."

Shepherd garnered criticism after admitting to never voting, partly due to her upbringing as a strict Jehovah's Witness. She was quoted as saying that she just "never knew the dates or anything"; she stated, "I've never voted for anything in my life." In January 2008, Sherri referred to Gospel singer Shirley Caesar as "the black Patti LaBelle." LaBelle, like Caesar, is Black.

In 2008, she again created controversy on The View due to "flippant" remarks regarding abortion. She later clarified her position, saying that her remarks weren't meant to be flippant but rather to inspire other women who may be dealing with guilt after abortions. She cited having multiple abortions in her 20's, suffering from shame and guilt from those experiences, and then later, she converted to Christianity. In 2009, Shepherd won the Daytime Emmy Award for Outstanding Talk Show Host alongside Behar, Goldberg, Walters, and Elisabeth Hasselbeck.

On November 6, 2019, Shepherd was unmasked as the Penguin on the second season of The Masked Singer.

Dancing with the Stars

In March 2012, Shepherd participated as a celebrity contestant on the fourteenth season of ABC's Dancing with the Stars. Her dance partner was Val Chmerkovskiy. The team lasted several weeks.

Shepherd wrote the book Permission Slips: Every Woman's Guide to Giving Herself a Break, published in October 2009. Shepherd also has a co-author credit on Plan D: How to Lose Weight and Beat Diabetes, published in 2013.

Sherri raises funds for the YAI Sherri Shepherd "Believe in Abilities" Fund. YAI supports people of all ages with intellectual and developmental disabilities in achieving the fullest life possible by creating new opportunities for living, loving, working, and learning. YAI is a network of agencies with programs that empower and enhance the lives of thousands of people we support and their families.

In 2011, Shepherd offered to pay six months' rent and utilities of homeless former American Gladiators star Debbie Clark (Storm). As of 2015, a project includes a line of wigs and hair add-ins.

Shepherd was married to Jeff Tarpley from 2001 to 2009. They have a son, Jeffrey, born in April 2005 on his mother’s 38th birthday. Shepherd became engaged to writer Lamar Sally on December 26, 2010. The couple married in Chicago in August 2011 and separated in May 2014. Following the split, Shepherd and Sally welcomed a son via surrogacy in August 2014; Shepherd does not have a biological connection to the child, as he was conceived using a donor egg. The following year, a Pennsylvania appeals court ruled that Shepherd was legally responsible for the child after she challenged the surrogacy contract and sought to remove her name from his birth certificate.

Shepherd has type 2 diabetes after having had pre-diabetes for years. Formerly a Jehovah's Witness, Shepherd is a devout Christian. She revealed in 2008 that she had had multiple abortions.