Sistar (Korean: 씨스타, often stylized as SISTAR) was a South Korean girl group formed in 2010 by Starship Entertainment. The group consisted of Hyolyn, Bora, Soyou, and Dasom. Their debut studio album So Cool was released on 9 August 2011. Their second album, Give It to Me, was released on 11 June 2013. Their biggest hits include "So Cool", "Alone", "Touch My Body", "Loving U" and "Give It to Me". Their fourth single, "So Cool," debuted at number one on the Gaon Digital Chart as well as the Billboard Korea K-Pop Hot 100 singles chart, starting a streak of 9 consecutive number-one hits before the group's disbandment in 2017.

Sistar have amassed prominent digital sales, being one of five Korean artists to ever have 9 or more number one singles on Gaon.

Sistar performing at the Daejon University Festival in 2010

Sistar began their group activities early in 2010 with commercials and magazine photoshoots. They made their official debut with the song "Push Push" on 3 June 2010. Sistar had their debut performance on 4 June on Music Bank and continued promotions on various Korean music shows through 26 July.

The group returned with their second single "Shady Girl" on 25 August. The music video featured Super Junior member Kim Heechul. The group received a lot of media attention when a fan-taken video was uploaded online showing the group filming their performance at "Let's Start Sharing Concert" on 28 August. During the middle of their performance, member Bora suddenly fell onstage, fracturing her thumb. This prompted the other members to stop singing and assist her off the stage with the help of staff. Several minutes later, Bora returned to stage along with the other members to finish filming their performance. The video went viral on the internet and was featured on G4's online show Attack of the Show!, and an RTL Television news segment.

On 14 September, Sistar was invited to perform in Japan's "Hallyu Music Festival" as the only Korean girl group present. On 10 October, Sistar performed on the show Teen Superstar in Thailand. The group released their third single, "How Dare You," in November. On 9 December the group attended the Golden Disk Awards and won the "Newcomer Award." On 27 December, Sistar won their first music show award for "How Dare You" on Music Bank.

Sistar performing "How Dare You" at the Cyworld Festival in 2011

On 27 April it was announced that Sistar would debut a sub-unit, Sistar19, with members Hyolyn and Bora. Their debut song, "Ma Boy", was released on 3 May. Sistar19 had their debut performance on 5 May and promoted throughout the month. Sistar returned on 9 August with their first studio album entitled So Cool. "So Cool" was the inaugural number one song on the Billboard Korea K-Pop Hot 100 chart after the chart's launch on 25 August. On 11 September Sistar won their first "Mutizen Award" on Inkigayo.

In early April it was announced that Sistar was going to broadcast their "So Cool" comeback showcase globally in 41 countries. Their first mini album, entitled Alone, was released on 12 April and contained six songs produced by Brave Brothers. Their second mini album, Loving U, was released on 28 June. The mini-album contained the title track, "Loving U", produced by Duble Sidekick, one new song "Holiday" and remixes of the groups' past hits. 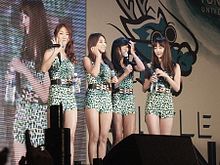 Sistar19 released their first mini album, Gone Not Around Any Longer, and the title track of the same name on 31 January 2013. Their recording label, Starship Entertainment, announced on 16 May 2013 that Sistar will return mid-June, with another confirmation on 2 June, stating that they will be making their comeback with a second full album. On 3 June 2013, teaser photos featuring members Dasom and Bora were released. Following day, Sistar released photo teasers of all the members for Give It to Me and revealed that they will have a Moulin Rouge theme. A video teaser for "Give It to Me" was released on 6 June. Sistar's second studio album, Give It to Me, was released on 11 June with the title track of the same name. The album debuted at number four on Gaon Music Chart. On 26 October, Sistar represented South Korea at ABU TV Song Festival 2013 in Hanoi, Vietnam, performing "Give It to Me". Three more singles off the album: "The Way You Make Me Melt", "Crying" and "Bad Boy", as well as two promotional singles, were also released to promote the album. On 26 November, Hyolyn released her debut studio album Love & Hate, which reached number five on Gaon.

On 5 June 2014, Sistar's label, Starship Entertainment, told Newsen that the group was working on a new album and would come back in the beginning of July. On 21 July, Sistar released their third mini album, Touch N Move along with its title track "Touch My Body". EP was commercially very successful, peaking at numbers two and eight on Gaon and Billboard's US World Albums charts, respectively. Another single "Naughty Hands" was released in late July. On 26 August, Sistar released their fourth mini album and second summer special album titled Sweet & Sour, shortly after the promotions of "Touch My Body". EP contained two new songs "I Swear" and "Hold on Tight" and four remixes for singles "Loving U", "Gone Not Around Any Longer", "Give It to Me" and "Touch My Body". In December, Sistar won the Best Female Group Award at the 2014 Mnet Asian Music Awards. 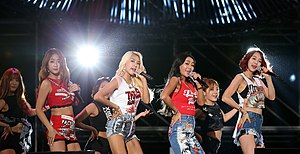 Sistar at The 70th Independence Day of Republic of Korea, August 14, 2015. Left to right: Soyou, Bora, Hyolyn and Dasom

On 22 June 2015, Sistar released its fifth mini-album, Shake It, along with its title track of the same name. It debuted at number three on Gaon, and two new singles - "Shake It" and "Don't Be Such a Baby" - were released in late June. In August, Hyolyn was confirmed to join the second season of Unpretty Rapstar. On 1 August, Sistar performed in Los Angeles, California at 2015 KCON. On 14 August, they performed at The 70th Independence Day of the Republic of Korea, their home country. On 7 September, Hyolyn released a free single, "The Wall Destroyer" featuring one of Eluphant's member, Keebee. On 22 September, Soyou collaborated with singer Kwon Jeong Yeol of 10cm. Their single is titled "Lean on Me."

On June 1, it was revealed that Sistar would be coming back in June with the title song produced by Black Eyed Pilseung who also produced Sistar's song, "Touch My Body". On June 4, Sistar and their fans celebrated Sistar's 6th Anniversary, displaying a picture of the girls with the gifts and cakes that they received. On June 10, Starship released a mash-up collaboration of Sistar and DJ Soda. On June 14, it was revealed that the title song of their fourth EP is called "I Like That". On June 20, Sistar had a live countdown for their music video and album release. On June 21, Starship released the music video for "I Like That" on their official YouTube channel and officially released Insane Love.

In May 2017, Sistar released a teaser photo revealing that they will be making a comeback at the end of May. Their new track titled "Lonely" which was composed by Black Eyed Pilseung was released on May 31. On May 22, Starship Entertainment confirmed that the project was to be the last comeback for Sistar and they officially disbanded after their seven-year promotions as a group. All the members wrote personal letters of farewell to their fans, confirming their disbandment.

The group performed their most successful summer hits—"Touch My Body", "Shake It", "Loving U", and "I Swear"—along with their last song "Lonely" on four major music shows before concluding the schedule on Inkigayo on June 4, 2017, before officially disbanding.

Sistar's subgroup, Sistar19, debuted in 2011, featuring Hyolyn and Bora. The group's first single, "Ma Boy", was released in May 2011 followed by a second single, "Gone Not Around Any Longer", in January 2013, alongside an EP with the same name, released January 31 of that year.

Main article: List of awards and nominations received by Sistar

Retrieved from "https://en.wikipedia.org/w/index.php?title=Sistar&oldid=1008999693"
Uses material from the Wikipedia article Sistar, released under the CC BY-SA 3.0 license.