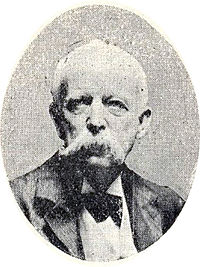 Colonel Sir Thomas Hungerford Holdich KCMG KCIE CB FRGS (13 February 1843 – 2 November 1929) was an English geographer and president of the Royal Geographical Society. He is best known as Superintendent of Frontier Surveys in British India and author of numerous books, including The Gates of India, The Countries of the King's Award and Political Frontiers and Boundary Making.

Born in Dingley, Northamptonshire, England to the Rev. Thomas Peach Holdich, he was educated at Godolphin Grammar School and the Royal Military Academy, obtaining a commission in the Royal Engineers in 1862. He saw active service in the Bhutan expedition of 1865, the Abyssinian campaign of 1867-68 and the Second Afghan War of 1878–79.

On his retirement to half-pay in 1898, he thanked "that providence which had been good to me in that during that last year of my Indian career I had been able to put a round finish on the last of our frontier maps". He was placed on the Retired list with an Indian pension 13 February 1900.

In later years, he wrote and lectured extensively on geographical issues, and served as president of the Royal Geographical Society from 1917 to 1919. He also served as President of the Geographical Association between 1917 and 1918. He contributed a number of entries to the eleventh edition of the Encyclopædia Britannica.

Holdich died in 1929 at his home at Parklands in Merrow, Surrey, near Guildford, at the age of 86.

Holdich was married to Ada Vanrenen, and had two daughters and two sons.