A Mapp of Ye Improved Part of Pensilvania in America, Divided Into Countyes, Townships and Lotts...." (published circa 1687)

Thomas Holme (1624–1695) was the first Surveyor General of Pennsylvania, in which capacity he laid out the original plan for the city of Philadelphia.

Holme was one of the Valiant Sixty, a group of early leaders and activists in the Religious Society of Friends (Quakers).

Holme was born in Lancashire, England, on November 3, 1624, to a yeoman named George and his wife Alice (née Whiteside). He married Sarah Croft in 1649, and soon enlisted in the army under the leadership of Oliver Cromwell, where he attained the rank of captain. It may have been in the army that he gained some experience in surveying. After retiring he was granted more than 4,000 acres (16 km²) in County Wexford, Ireland, which was then under the control and colonization of England.

At some point he joined the Quaker movement in Ireland, reputedly converted by George Fox, founder of the sect. There he met fellow Quaker William Penn, founder of Pennsylvania. In 1682, Penn wrote to Holme from the colony asking him to come be his surveyor, since his original surveyor, Captain William Crispin, had recently become ill and died on the voyage to America. Shortly thereafter, Holme, a widower, sailed with four of his children to America, where he arrived in August 1682. 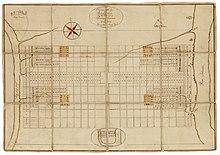 Holme's 1682 map of the city plan for central Philadelphia

Holme designed the plan of the city of Philadelphia and produced the first detailed map of Pennsylvania, entitled "A Mapp of Ye Improved Part of Pensilvania in America, Divided Into Countyes, Townships and Lotts...." (published circa 1687). On Penn's arrival in the colony, he appointed Holme as one of his councilors. Holme also served as a justice of the peace and commissioner of property.

Holme held the office of Surveyor-General until his death at age 71 in the spring of 1695, in Dublin Township, Philadelphia County (now the Holmesburg section of the city of Philadelphia). In 1863, a memorial was erected at his burial site, in the form of a six-foot-tall marble obelisk, near where his home is believed to have been located, now part of Pennypack Park.

Philadelphia's Holme Avenue, Holme Circle, and Thomas Holme Elementary School were all named in his honor, as is Holmesburg, a neighborhood in northeast Philadelphia.