Russian basketball player
In this Eastern Slavic name, the patronymic is Pavlovich and the family name is Mozgov.

Timofey Pavlovich Mozgov (Russian: Тимофей Павлович Мозгов, IPA: [tʲɪmɐˈfʲej mɐˈzɡof], born July 16, 1986) is a Russian professional basketball player for Khimki of the VTB United League and the EuroLeague. Mozgov won an NBA championship with the Cleveland Cavaliers in 2016, becoming one of the first Russians to do so, alongside Sasha Kaun. As a member of the Russian national team, he won the bronze medal at the 2012 Summer Olympics, as well as a bronze medal at EuroBasket 2011. Mozgov signed with the Lakers in 2016 before being traded to the Nets in the 2017 offseason. In the 2018 offseason, he was traded to the Magic before returning to Khimki in 2019.

Mozgov began his professional career with LenVo St. Petersburg, in the Russian second-tier division, during the 2004–05 season. In 2006, he moved to CSK VVS Samara 2, the second-level club from Samara. Before the 2006–07 season, he joined Khimki Moscow Region, where he played through the 2009–10 season. 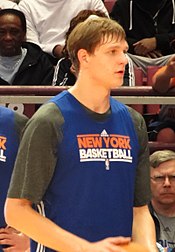 Mozgov as a member of the Knicks

In 2010, Mozgov signed a three-year, $9.7 million contract with the New York Knicks.

On January 30, 2011, after a three-week stint on the bench, Mozgov finally saw significant minutes against the Detroit Pistons. He had a career game, scoring 23 points and grabbing 14 rebounds to lead New York to a 124–106 victory. He played 40 minutes and was treated to loud chants of "Mozgov! Mozgov!" in the final minute. 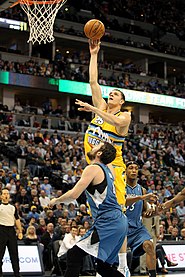 Mozgov in a game as a member of the Denver Nuggets

On February 22, 2011, Mozgov was traded to the Nuggets in a three-way blockbuster deal, which also involved the Minnesota Timberwolves that brought Carmelo Anthony to New York.

On January 7, 2015, Mozgov was traded, along with a 2015 second-round pick, to the Cleveland Cavaliers in exchange for two protected 2015 first-round picks (via Oklahoma City and Memphis). Having always previously worn number 25, he was forced to change that upon joining the Cavaliers due to the franchise having the number retired for Mark Price. He instead chose number 20 as it was the number his father, a Soviet handball player, used while he played the sport. On January 9, he made his debut for the Cavaliers, recording nine points and eight rebounds off the bench in a 112–94 loss to Golden State.

On June 4, 2015, he became the first Russian to play in the NBA Finals, as the Cavaliers lost Game 1 of the series to the Warriors. The Cavaliers went on to lose the series in six games; Mozgov started all six.

On June 23, 2015, Cleveland exercised its option on Mozgov's contract for the 2015–16 season. He played a reduced role throughout the season, as the Cavaliers made it to the 2016 NBA Finals, where they defeated the Warriors in a rematch. Mozgov and teammate Sasha Kaun became the first Russians to win an NBA title.

On July 8, 2016, Mozgov signed a four-year, $64 million contract with the Los Angeles Lakers. The Lakers received "league-wide criticism" for the size of Mozgov's contract. The contract has been described as "huge", "dreadful", and "indefensible".

Mozgov made his debut for the Lakers in their season opener on October 26, 2016, recording 12 points and eight rebounds in a 120–114 win over the Houston Rockets. On March 14, 2017, the Lakers shut down a healthy Mozgov for the rest of the season to give the majority of playing time over the final 15 games to the team's younger players.

On June 22, 2017, Mozgov was traded, along with D'Angelo Russell, to the Brooklyn Nets in exchange for Brook Lopez and the rights to Kyle Kuzma, the 27th pick in the 2017 NBA draft.

On July 6, 2018, Mozgov was traded, along with the draft rights to Hamidou Diallo, a 2021 second-round draft pick, and cash considerations, to the Charlotte Hornets in exchange for Dwight Howard. A day later, he was traded again, this time to the Orlando Magic in a three-team deal.

On July 6, 2019, Mozgov was waived by the Magic without having played a game, due to a knee injury. On November 28, 2019, the NBA approved the Magic's petition to have Mozgov's salary removed from their books due to the knee injury.

On July 31, 2019, Mozgov signed a one-year deal to return to his home country and play once again for Khimki of the VTB United League and the EuroLeague.

Mozgov has also been a member of the senior Russian national basketball team. He played at EuroBasket 2009, EuroBasket 2011, and the 2012 Summer Olympics, winning bronze medals at the latter two.