The draft lottery took place during the playoffs on May 16, 2017. The 53–29 Boston Celtics, who were also the #1 seed in the Eastern Conference and reached the Eastern Conference Finals at the time of the NBA draft lottery, won the #1 pick with pick swapping rights thanks to a previous trade with the Brooklyn Nets, who had the worst record the previous season. The Los Angeles Lakers, who had risked losing their 2017 first round pick to the Philadelphia 76ers, moved up two spots to get the Second overall pick, while Philadelphia moved up to receive the No. 3 pick due to the Sacramento Kings moving up in the draft, which activated pick swapping rights the 76ers had from an earlier trade. On June 19, four days before the NBA draft began, the Celtics and 76ers traded their top first round picks to each other, meaning the holders of the top four picks of this year's draft would be exactly the same as the previous year's draft.

The draft class was the youngest draft class to date, with the most freshmen and fewest seniors selected in the first round; the top seven picks in the draft were college freshmen. It was the third time, and the second in a row, that three players were selected from Serbian team KK Mega Basket in the same draft (Vlatko Čančar, Ognjen Jaramaz, Alpha Kaba), with it previously occurring during the 2014 and 2016 NBA draft. The draft also received much media coverage from ESPN pertaining to eventual second overall pick Lonzo Ball and his outspoken father, LaVar Ball, much to the chagrin of many sports fans and even some ESPN employees. This was one of the rare occasions where a player drafted from their year did not win Rookie of the Year; the award went to 2016 first overall pick Ben Simmons, the first player since Blake Griffin in 2011 to win the award in a year he was not drafted. 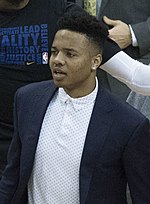 Markelle Fultz was selected 1st overall by the Philadelphia 76ers. 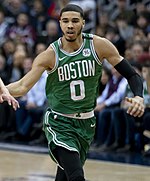 Jayson Tatum was selected 3rd overall by the Boston Celtics. 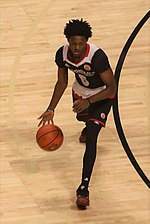 De'Aaron Fox was selected 5th overall by the Sacramento Kings.

Jonathan Isaac was selected 6th overall by the Orlando Magic. 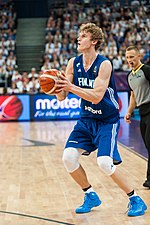 Lauri Markkanen was selected 7th overall by the Minnesota Timberwolves (traded to the Chicago Bulls). 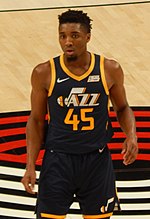 Donovan Mitchell was selected 13th overall by the Denver Nuggets (traded to the Utah Jazz). 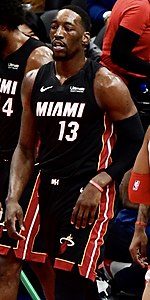 Bam Adebayo was selected 14th overall by the Miami Heat.

John Collins was selected 19th overall by the Atlanta Hawks.

Jarrett Allen was selected 22nd overall by the Brooklyn Nets.

These players were not selected in the 2017 NBA Draft, but have played at least one game in the NBA.

The draft was conducted under the eligibility rules established in the league's 2017 collective bargaining agreement (CBA) with its player's union. The CBA that ended the 2011 lockout instituted no immediate changes to the draft, but called for a committee of owners and players to discuss future changes.

Players who were not automatically eligible for the draft had to declare their eligibility by notifying the NBA offices in writing no later than 60 days before the draft. For the 2017 draft, this date fell on April 23. After that date "early entry" players were able to attend NBA pre-draft camps and individual team workouts to show off their skills and obtain feedback regarding their draft positions. Under the CBA, a player could withdraw from consideration from the draft at any time before the final declaration date, which was 10 days before the draft. Under NCAA rules, players had until May 24 (10 days after the draft combine) to withdraw from the draft and retain college eligibility.

A player who hired an agent forfeited his remaining college eligibility regardless of whether he was drafted.

At the time, a record-high 185 underclassed draft prospects (i.e., players with remaining college eligibility) had declared themselves for eligibility at the April 24 deadline (138 of them being from college), although college players who had not hired agents or signed professional contracts outside the NBA were able to decide to return to college by May 24, 10 days after the end of the NBA Draft Combine. These players have publicly indicated that they have hired agents, or had planned to do so around the start of the draft; those who hired agents immediately lost their eligibility to return to NCAA basketball in 2017–18. By the end of the May 24 deadline, 73 draft candidates from college decided to return to their respective colleges for at least another year, leaving 64 underclassmen to officially enter the draft this year. Additionally, two more players left entry at the end of the international player deadline, meaning both Maverick Rowan from North Carolina State and Darin Johnson from Cal State Northridge would not return for college, but one player managed to enter the college underclassman deadline, thus leaving 63 entries at hand for the NBA Draft.

International players that had declared this year and did not previously declare in another prior year can also drop out of the draft about 10 days before the draft begins on June 12. Initially, there were 46 players who originally expressed interest entering the 2017 draft. At the end of the international deadline, 36 players wound up declining entry for the draft, leaving only 10 international players staying in the NBA Draft. As a result, 73 total underclassmen entered the 2017 NBA Draft.

The invitation-only NBA Draft Combine was held in Chicago from May 9 to 14. The on-court element of the combine took place on May 11 and 12. This year's event had Under Armour as its primary sponsor. A total of 67 players were invited for this year's NBA Draft Combine, with 5 more named as alternates in the event some players could not come for whatever reason. Ten invited players declined to attend for various reasons, including three players completely on the international scale. Eighteen more players that were guaranteed invitations were also players testing out their draft stocks during the event. Eleven players participating in the event were seniors, the lowest number ever of combine participants who had exhausted their college eligibility. During the event, six different players were deemed injured either before or during this year's Draft Combine. At the end of the May 24 college deadline, eight players who originally declared for the NBA Draft and were invited to the Draft Combine this year, including potential "none-and-done" Kentucky freshman redshirt Hamidou Diallo, ultimately returned to college for at least one more season.

The NBA annually invites around 15–20 players to sit in the so-called "green room", a special room set aside at the draft site for the invited players plus their families and agents. When their names are called, the player leaves the room and goes up on stage. Other players who are not invited are allowed to attend the ceremony. They sit in the stands with the fans and walk up on stage when (or if) they are drafted. 10 players were invited to the 2017 NBA draft on June 8, with three more of them being invited two days later. Seven more players would be invited to complete the green room listing on June 14, bringing the total invite list to 20. The following players (listed alphabetically) were confirmed as invites for the event this year.