The 2016 NBA draft was held on June 23, 2016, at Barclays Center in Brooklyn. It was televised nationally in the U.S. by ESPN, and was live streamed for the first time in NBA draft history by The Vertical. National Basketball Association (NBA) teams took turns selecting amateur U.S. college basketball players and other eligible players, including international players. The draft lottery took place during the playoffs, on May 17, 2016. This was the first time since the lottery system was introduced in 1985 that all NBA teams that missed out on the playoffs remained in the exact spots they were designated, meaning the 10-win/72-loss Philadelphia 76ers received the No. 1 pick, the Los Angeles Lakers kept the No. 2 pick, the Boston Celtics via the Brooklyn Nets got the No. 3 pick, and everyone else stayed in their same spots based on the regular season standings from the 2015–16 season.

Ben Simmons was selected first overall by the Philadelphia 76ers. 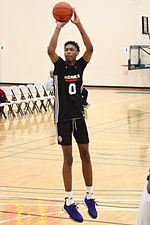 Brandon Ingram was selected second by the Los Angeles Lakers. 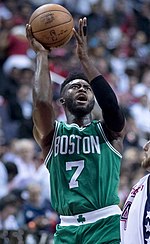 Jaylen Brown was selected third by the Boston Celtics.

Buddy Hield was selected sixth by the New Orleans Pelicans. 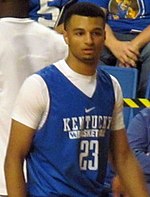 Jamal Murray was selected seventh by the Denver Nuggets.

Thon Maker was the first high school player to be taken in the first round since 2005. He was selected tenth by the Milwaukee Bucks. 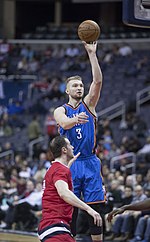 Domantas Sabonis, son of the Hall of Fame member and former international superstar Arvydas Sabonis, was selected eleventh by the Oklahoma City Thunder via the Orlando Magic. 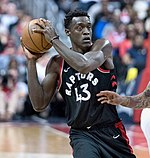 Pascal Siakam was selected 27th by the Toronto Raptors.

Malcolm Brogdon was named NBA Rookie of the Year, despite being selected in the second round (36th pick overall).

These players were not selected in the 2016 NBA draft, but have appeared in at least one regular-season or playoff game in the NBA.

The draft is conducted under the eligibility rules established in the league's 2011 collective bargaining agreement (CBA) with its players union. The CBA that ended the 2011 lockout instituted no immediate changes to the draft, but called for a committee of owners and players to discuss future changes.

Player who are not automatically eligible must declare their eligibility for the draft by notifying the NBA offices in writing no later than 60 days before the draft. For the 2016 draft, this date fell on April 24. After this date "early entry" players may attend NBA pre-draft camps and individual team workouts to show off their skills and obtain feedback regarding their draft positions. Under the CBA a player may withdraw his name from consideration from the draft at any time before the final declaration date, which is 10 days before the draft. Under newly implemented NCAA rules, players had until May 25 (10 days after the draft combine) to withdraw from the draft and retain college eligibility.

A player who has hired an agent will forfeit his remaining college eligibility regardless of whether he is drafted. The CBA allows a player to withdraw from the draft twice; the 2016 NCAA rule change brought it in line with the CBA on this detail.

A record-high 162 under-classed draft prospects had declared themselves for eligibility at the April 24 deadline (116 of them being from college), although college players who had not hired agents or signed professional contracts outside the NBA were able to decide to return to college by May 25, 10 days after the end of the NBA Draft Combine. At the end of the May 25 deadline, there were 57 players confirming their intentions of returning to school, thus leaving the grand total of underclassmen participating in the NBA draft as 59. Players listed in this region have publicly indicated that they have hired agents, planned to do so around this time, or made themselves their own agents; those who have hired agents and weren't drafted are deemed ineligible to return to NCAA basketball in 2016–17. However, with this year's draft class, it provided the most undrafted college underclassmen out there with 30 people there not being taken at all.

International players that had declared this year and didn't previously declare in another prior year can also drop out of the draft about 10 days before the draft begins on June 13. Initially, there were 46 players that expressed interest in entering the 2016 draft. However, at the end of June 13, there were 33 international prospects that, for one reason or another, declined entry to the 2016 NBA draft, leaving only 13 international candidates for the event. That left the overall number of underclassmen entering the draft as 72.

This is a dynamic list and may never be able to satisfy particular standards for completeness. You can help by adding missing items with reliable sources.

The invitation-only NBA Draft Combine was held in Chicago from May 10 to 15. The on-court element of the combine took place on May 12 and 13. This year, a total of 63 players entered the combine, with the only two alternates that had their invitations be accepted for the event being Jaron Blossomgame and Marcus Lee. Furthermore, the only international player that got invited and accepted his invitation this year was Zhou Qi of the Xinjiang Flying Tigers. Originally, Wayne Selden Jr. was to be a participant for the event, but he injured himself before the combine officially began, thus making Sheldon McClellan from the Miami Hurricanes men's basketball team his replacement for on-court events. Buddy Hield, the consensus national college player of the year for 2015–16, participated only in off-court events; his graduation ceremony at the University of Oklahoma conflicted with the on-court portion of the combine, and he chose to attend graduation. A. J. Hammons also withdrew his name from the draft combine on the day of the on-court events.

During the event, sophomore Kentucky and future Phoenix Suns point guard Tyler Ulis broke combine records by being the lightest player recorded in draft combine history at 149.2 pounds. After the event, nine of the participants that were a part of the combine went back to their respective colleges. However, it was announced just days after the NBA Draft Combine was over that some of the events' measurements would be under review since some prospects were provided with rather questionable results, especially when compared to how they measured up in previous physical events.

The NBA conducts an annual lottery to determine the draft order for the teams did not make the playoffs in the preceding season. Every NBA team that missed the NBA playoffs had a chance at winning a top three pick, but teams with worse records had a better chance at winning a top three pick. After the lottery selected the teams that receive a top three pick the other teams receive an NBA draft pick based on their winning percentage from the prior season. As it is commonplace in the event of identical win-loss records, the NBA performed a random drawing to break the ties on April 15, 2016. The table below shows each non-playoff team's chances (based on their record at the end of the NBA season) of receiving picks 1–14.

The 2016 NBA lottery was held on May 17. The Philadelphia 76ers, who had the worst record in the NBA and the highest chance to win the lottery at 26.9% (given the 25% chance to win outright and 1.9% chance that the Sacramento Kings, with whom the 76ers had previously traded for pick-swap rights, would be drawn first), won the lottery. The Los Angeles Lakers stayed at the second spot, and the Brooklyn Nets (whose pick was acquired by the Boston Celtics via an earlier trade) stayed at the third spot. As a result, the only team that would have multiple selections in the lottery would be the Phoenix Suns, who hold their own fourth selection, which held the least likely odds of staying exactly where it was at out of all teams in the draft at 9.9%, and the thirteenth selection, which was acquired from the Washington Wizards earlier in the year and had a 97.8% chance of keeping Washington's selection (either at 96% with Pick 13 or at 1.8% at Pick 14). This was the first instance in NBA draft lottery history where every selection remained exactly where it was originally placed before the lottery began, which actually was held by 1.8% likelihood despite having a 1-in-55 chance of it happening due to the lottery selecting only the Top 3 slots.

The NBA annually invites around 15–20 players to sit in the so-called "green room", a special room set aside at the draft site for the invited players plus their families and agents. When their names are called, the player leaves the room and goes up on stage. Other players who are not invited are allowed to attend the ceremony. They sit in the stands with the fans and walk up on stage when (or if) they are drafted. The following 19 players were invited (listed alphabetically) to the 2016 NBA draft on June 18, one day before the 2016 NBA Finals ended. A record-high 5 different players were added to the green room listing before the beginning of the 2016 NBA draft commenced.