The 2015 NBA draft was held on June 25, 2015, at Barclays Center in Brooklyn. It was televised nationally in the U.S. by ESPN. National Basketball Association (NBA) teams took turns selecting amateur U.S. college basketball players and other eligible players, including international players. The draft lottery took place on May 19, 2015.

Other noteworthy announcements that came out of the draft included the official announcement of the passing of the last pioneer of the original NBA, Harvey Pollack, around the third pick and the resignation of the league's president of basketball operations Rod Thorn that became official in August after the end of the first round. 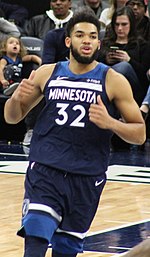 Karl-Anthony Towns was selected first overall by the Minnesota Timberwolves.

D'Angelo Russell was selected second by the Los Angeles Lakers. 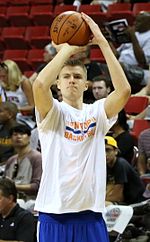 Kristaps Porziņģis was selected fourth by the New York Knicks. 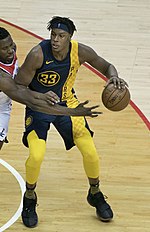 Myles Turner was selected eleventh by the Indiana Pacers.

Devin Booker was selected thirteenth by the Phoenix Suns.

Rondae Hollis-Jefferson was selected twenty-third by the Portland Trail Blazers and traded to the Brooklyn Nets. 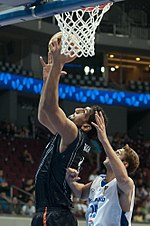 Satnam Singh was selected 52nd by the Dallas Mavericks. Singh became the first Indian to be drafted into the NBA.

These players were not selected in the 2015 NBA draft, but have appeared in at least one regular-season or playoff game in the NBA.

The draft was conducted under the eligibility rules established in the league's new 2011 collective bargaining agreement (CBA) with its players union. The CBA that ended the 2011 lockout instituted no immediate changes to the draft, but called for a committee of owners and players to discuss future changes. Since the 2011 CBA, the basic eligibility rules have been:

Player who are not automatically eligible must declare their eligibility for the draft by notifying the NBA offices in writing no later than 60 days before the draft. For the 2015 draft, this date fell on April 26. After this date, "early entry" players may attend NBA pre-draft camps and individual team workouts to show off their skills and obtain feedback regarding their draft positions. Under the CBA, a player may withdraw his name from consideration from the draft at any time before the final declaration date, which is 10 days before the draft. Under NCAA rules at that time, players only had until April 16 to withdraw from the draft and maintain their college eligibility. In January 2016, the NCAA changed its draft withdrawal date to 10 days after the end of the annual NBA Draft Combine in May, with the 2016 draft the first to be held under the new rule.

This is a dynamic list and may never be able to satisfy particular standards for completeness. You can help by adding missing items with reliable sources.

The NBA conducted an annual draft lottery to determine the draft order for the teams that did not make the playoffs in the preceding season. Every NBA team that missed the NBA playoffs had a chance at winning a top three pick, but teams with worse records had a better chance at winning a top three pick. After the lottery selected the teams that receive a top three pick, the other teams received an NBA draft pick based on their winning percentage from the prior season. The table below shows each non-playoff team's chances (based on their record at the end of the NBA season) of receiving picks 1–14.

The 2015 NBA lottery was held on May 19. The Minnesota Timberwolves, who had the worst record in the NBA and the highest chance to win the lottery at 25%, won the lottery. The Los Angeles Lakers moved from the fourth spot to second, while the Philadelphia 76ers got the third pick. The only team that moved down from their original draft position altogether was the New York Knicks, who moved from the projected second pick to the fourth pick.

In the first round of the NBA draft, each team has up to five minutes to decide which player they would like to select. The team can also propose a trade with another team before making their selection. The NBA commissioner will announce the selection and the player, wearing a basketball cap sporting the team's logo, comes up to the stage to be congratulated and presented to the audience. In the second round, each team has up to two minutes to make their picks while the deputy commissioner assumes the commissioner's role.

The NBA annually invites around 15–20 players to sit in the "green room", a special room set aside at the draft site for the invited players plus their families and agents. When their names are called, the player leaves the room and goes up on stage. Other players who are not invited are allowed to attend the ceremony, sit in the stands with the fans and walk up on stage when (or if) they are drafted. The 19 players who accepted invitations to attend the draft were Devin Booker, Willie Cauley-Stein, Sam Dekker, Jerian Grant, Rondae Hollis-Jefferson, Stanley Johnson, Frank Kaminsky, Kevon Looney, Trey Lyles, Emmanuel Mudiay, Jahlil Okafor, Kelly Oubre Jr., Cameron Payne, Bobby Portis, Kristaps Porziņģis, D'Angelo Russell, Karl-Anthony Towns, Myles Turner, and Justise Winslow. International prospect Mario Hezonja did not attend because he was still involved with his then-team FC Barcelona at the time. Three other players, R.J. Hunter, Tyus Jones, and Delon Wright all had invitations as well, but they declined their invitations for undisclosed reasons.

The following trades involving drafted players were made on the day of the draft.