The 2019 NBA draft was held on June 20, 2019. It took place at Barclays Center in Brooklyn, New York. National Basketball Association (NBA) teams took turns selecting amateur United States college basketball players and other eligible players, including international players. It was televised nationally on ESPN. State Farm was the presenting sponsor of the NBA draft for the eighth consecutive year. This draft was the first to feature a new weighted lottery system in which the three worst teams each had a 14 percent chance of winning the lottery; these teams were the New York Knicks, Cleveland Cavaliers, and Phoenix Suns. The lottery took place on May 14, during the NBA playoffs. Three of the four teams who held the top four picks of the draft this year rose up from at least six spots in the lottery, including the New Orleans Pelicans, who won the first pick with 6 percent odds. 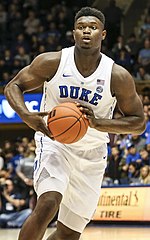 Zion Williamson was selected first overall by the New Orleans Pelicans. He is one of three Duke players drafted as lottery picks. 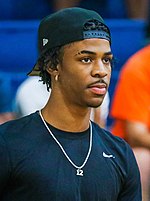 Ja Morant was selected second overall by the Memphis Grizzlies. He went on to win NBA Rookie of the Year honors for the 2019–20 season. 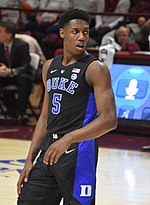 Jarrett Culver was selected sixth overall by the Phoenix Suns and was traded to the Minnesota Timberwolves. 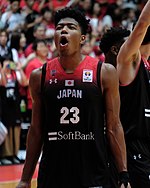 These players were not selected in the 2019 NBA draft, but have played at least one game in the NBA.

Prior to the day of the draft, the following trades were made and resulted in exchanges of draft picks between the teams below.

The following trades were reportedly agreed prior to and on the day of the draft and were completed at a later date. Due to salary cap reasons, most of these trades were officially announced on July 6, after the NBA moratorium period ended.

The invitation-only NBA Draft Combine was held in Chicago from May 15 to 19. The on-court element of the combine took place on May 17 and 18. This year, 66 players were originally invited to the combine, including top prospects Zion Williamson and Ja Morant. The pool of participants also included Croatian Luka Šamanić, postgraduate Jalen Lecque, and Darius Bazley, who took a route similar to Mitchell Robinson with not playing in college or another league for a year before entering the draft. A couple of prospects also returned to the event after entering the previous year's combine, include an injury recovering Jontay Porter and Brian Bowen, a player who entered last year as a collegiate participant last year before heading off to play professionally in Australia this year. In addition, this year also introduced the NBA G League Elite Camp, which gave a certain number of draft hopefuls a chance to transfer into the NBA Draft Combine afterward. This year, eleven participants from that even joined the combine, increasing the number of total invites up to 77. One of the additional invites was Tacko Fall, who broke combine records for height (reaching 7 ft 7 in (2.31 m) with shoes on), wingspan, and standing reach.

The NBA draft lottery took place during the Playoffs on May 14, 2019. This was the first year in which the new NBA draft lottery system is applied, where the draft lottery was expanded to the top four picks (rather than the top three); and where the three teams with the worst records had equal odds. Teams with better records had an increased chance for a top-four pick when compared to the previous system, which was what happened for the New Orleans Pelicans, Memphis Grizzlies, and Los Angeles Lakers this year.

The draft is conducted under the eligibility rules established in the league's 2017 collective bargaining agreement (CBA) with its player's union. The previous CBA that ended the 2011 lockout instituted no immediate changes to the draft but called for a committee of owners and players to discuss future changes.

Players who are not automatically eligible have to declare their eligibility for the draft by notifying the NBA offices in writing no later than 60 days before the draft. For the 2019 draft, the date fell on April 21. After that date, "early entry" players are able to attend NBA pre-draft camps and individual team workouts to show off their skills and obtain feedback regarding their draft positions. Under the CBA a player may withdraw his name from consideration from the draft at any time before the final declaration date, which is 10 days before the draft. Under current NCAA rules, players had until May 29 (10 days after the draft combine) to withdraw from the draft and retain college eligibility.

A player who has hired an agent forfeits his remaining college eligibility when he is drafted. He can be represented beginning after any basketball season, following a request for an evaluation from the NBA Undergraduate Advisory Committee. From this draft on, players who declare for the NBA draft and are not selected have the opportunity to return to their school for at least another year, only after terminating all agreements with their agents.

This year, 233 underclassed draft prospects (i.e., players with remaining college eligibility) had declared by the April 21 deadline, with 175 of these players being from college (including one American who went to a Canadian college) or were high school postgraduates. The names left over mean they have hired an agent, or have announced that they plan to do so before the night of the draft. At the end of the deadline, 86 players declared their intentions to enter the draft with an agent while 89 announced their return to college for at least one more season. By the end of the international underclassmen deadline, both Sacha Killeya-Jones and Kouat Noi removed their names from this year's draft while removing their collegiate eligibility as well, which left 84 total college underclassmen entering the draft.

International players that had declared this year and did not previously declare in another prior year can drop out of the draft about 10 days before the draft begins on June 10. By the April 23 deadline, a record-high 58 international prospects, including an international Canadian university player, expressed interest in the 2019 NBA draft. By the end of the international deadline on June 10, 46 of these players pulled their names out of the draft, leaving only 12 fully foreign players entering the NBA draft this year. For this year's draft, the total underclassmen left were 96 players.

The NBA annually invites around 15–20 players to sit in the so-called "green room", a special room set aside at the draft site for the invited players plus their families and agents. When his name is called, the player leaves the room and goes up on stage. Other players who are not invited are allowed to attend the ceremony. They sit in the stands with the fans and walk up the stage when or if they are drafted. On June 8, the NBA announced only 9 invited players to the event (all of whom played collegiately this year). Four days later, the NBA invited seven more players to the event, bringing the number of invites up to 16. Two more players were invited the next day, bumping the number up to 18. On June 14, two more players were invited to this year's event, bringing up the total invites to 20. Five days later, three more players received last minute invitations for this year's NBA draft, bringing the total number of invites up to 23. On the night of the event, Matisse Thybulle was revealed as a last-minute invite, bumping up the final invite list to 24. The following players (listed alphabetically) were confirmed as invites for the event: