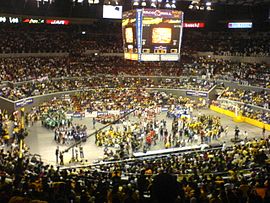 The UAAP Cheerdance Competition is an annual one-day event of the University Athletic Association of the Philippines for cheerdancing. The sequence of the performance are determined by drawing of lots prior the competition.

Before the announcement of winners and after all squads have performed, a recap is shown during the telecast. Only the Top 3 are announced at the end of the competition. The tally sheet of the total number of points garnered by all squads will be posted on social media briefly after the announcement of the top three. The 2015 UAAP Cheerdance Competition currently stands as the most attended collegiate sporting event in both the UAAP and across the Philippines, with a record-breaking 25,388 paying audience.

The competition rules has been revised through the years since it began. The following is based on the most recent rules drafted in 2012.

In 2013, a different way of composing the panel of judges was made. A single judge was assigned in every element in the cheerleading criteria. For the dance criteria, four judges were tasked to judge this particular criteria.

Every season, the host school for the UAAP Cheerdance Competition may or may not be different from the league's season host school.

In 2019, ADMU rejoined the competition since last competing in 2011. The same year DLSU did not compete that year.

School colors of
UP and UST

The cheerdance rivalry between UP and UST is one of the most productive rivalries in UAAP history, producing a total of 15 years of joint UP-UST appearances in the podium finishes, including a decade-long streak of joint medal finishes from 1999 to 2008.

The rivalry between the two squads began in 1999 when UST returned to reclaim the title after their year of absence. However, they only finished second behind UP Pep Squad. In 2001, UP Pep Squad matched the record of UST's three consecutive wins.

UP Pep Squad regained the title in 2007 and garnered their fifth title in 2008, with UST as second placer. The UP Pep Squad's goal of a second three-peat was not realized in 2009. In that year, UST failed to enter top three for the first time. In 2010, UP regained the title while UST came back in the podium finishing third. UP had another three-peat after winning the 2011 and 2012 editions - the same years when UST failed to enter top three again.

Neither UP nor UST won the cheerdance tilt in from 2013 to 2015. In 2013, UST had its lowest ranking and settled seventh place. As of 2013, UP never placed outside top three while UST failed to get a podium ranking four times in five years.

In 2014, UST successfully rejoined the podium finish at third place while UP placed second. In 2015, after nine years, UST defeated UP by winning second place while UP settled for third. As of 2015, both teams have identical number of championship titles at eight. UP, despite being dethroned, is by far the most established team for having stayed at the podium for 20 years straight.

In the 2017 edition, UP returned from a one year hiatus but failed to enter the top three. The UP Pep Squad placed 6th with perennial rivals UST Salinggawi Dance Troupe placing second. Both schools, however, did not make podium finishes in the same event since 2018.

Rise of the underdogs

In 2013, the National U Pep Squad claimed its first ever championship with an Arabian theme. The UAAP CDC was no longer about the triumvirate namely the FEU Cheering Squad, UST Salinggawi Dance Troupe and UP Varsity Pep Squad which were champions in the previous years. A year later The National U Pep Squad successfully clinched a back to back and furthermore a three-peat in 2015, being the third team to claim a three-peat in the CDC given some controversies. Despite the controversies the National U Pep Squad brought back a four-peat championship in the UAAP CDC with a futuristic theme in 2016 being the second squad to claim a four-peat beside UST Salinggawi Dance Troupe. Unfortunately, in the year 2017 they were not able to clinch a five-peat championship nor enter the top 3 due to low dance scores.

In 2017 the Adamson Pep Squad was crowned the champions with the hashtag 80's for 80. This proved that the underdogs could rise to the challenge of the former champions with the top three of that year containing former underdogs UE Pep Squad as bronze medalist and Adamson Pep Squad as gold medalist. The UST Salinggawi Dance Troupe were the silver medalists of that year. Meanwhile traditional power houses National U Pep Squad, UP Varsity Pep Squad and FEU Cheering Squad were out of the top 3.

In 2018 the National U Pep Squad had its comeback with a 5th Championship in just 6 years. Trailing back are the FEU Cheering Squad with a 70's Funk Theme as the first runner up and 2017 Gold Medalists Adamson Pep Squad with a Lion King theme, being their third straight year at the podium and landing the second runner up for 2018. Scores for the third runner up, UST Salinggawi Dance Troupe were close at a 0.5 margin from the second runner up. 2018 was also the year that the Ateneo Blue Babble Battalion was ranked 7th among all the teams. This was a first for the Blue Babble in 5 years.

In 2019 the National U Pep Squad added 1 more championship up its sleeve getting that 6th Gold Medal finish since 2013. The 2019 CDC edition is known to be the year where each team went out of their own comfort zones, did death defying stunts, difficult and complicated mountings and dismounts of their pyramid, and very synchronized choreography throughout their respective performances. In the end the scores of the 2019 UAAP Cheerdance Competition garnered the highest average of scores since 2012, despite the exact same ranking as the 2018th edition . First runner up, FEU Cheering Squad, comes close with a Michael Jackson Inspired Theme and brought back the Moonwalk stunt previously done in 2009 by the Ateneo Blue Babble Battalion. Second runner up, Adamson Pep Squad, wowed the crowd with a Caribbean-Disco inspired theme. Although the ADU Pep Squad's Last Pyramid (the Caribbean) was not complete they still had a clean run throughout their performance. Thus getting a higher score than the cleaner routines of the 4th placer (UST Salinggawi Dance Troupe) and 5th placer (UE Pep Squad) respectively. The scores for the 2nd, 3rd and 4th runner up were very close. at margins of 1.06 and 0.62.

School colors of
UP and NU

Questions were raised on the results of the 2015 Cheerdance Competition after NU Pep Squad won despite committing multiple errors including falls on their lifts and pyramids. This is in contrast with runners-up UP and UST executing clean programs. The UAAP community in the social media was outraged mainly due to their disbelief of the ranking and allegations of biased judging and corruption. NU claimed that their stunts have higher degree of difficulty compared to other teams. Due to this, UP filed an official complaint for the case detailing several judging inaccuracies but was remained unresolved with UAAP officials. As a response to the unresolved issues and to focus on international competitions, UP Pep Squad decided to skip the 2016 competition.