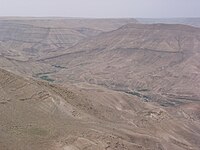 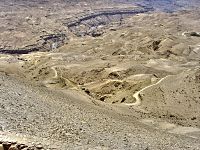 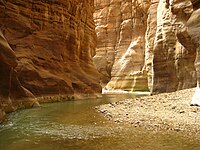 Wadi Mujib, which is also "almost certainly" the biblical Arnon Stream, is a river canyon in Jordan which enters the Dead Sea c 420 metres (1,380 ft) below sea level.

During the last Ice Age the water level of the Dead Sea reached 180 metres (590 ft) below sea level, about 240 metres (790 ft) higher than it is today. It flooded the lower areas of the canyons along its banks, which became bays and begun to accumulate sediments. As the climatic conditions changed, about 20,000 years ago, the water level of the lake dropped, leaving the re-emergent canyons blocked with lake marl. Most canyons managed to cut through their plugged outlets and to resume their lower courses. However, Wadi Mujib, abandoned its former outlet by breaking through a cleft in the sandstone. This narrow cleft became the bottleneck of an enormous drainage basin with a huge discharge. During the years the cleft was scoured deeper and the gorge of Wadi Mujib was formed.

The Mujib Reserve of Wadi Mujib is located in the mountainous landscape to the east of the Dead Sea, in the southern part of Jordan valley, approximately 90 kilometres (56 mi) south of Amman. A 212-square-kilometre (82 sq mi) reserve was created in 1987 by the Royal Society for the Conservation of Nature and is regionally and internationally important, particularly for the bird life that the reserve supports. In 2011, UNESCO declared Mujib biosphere reserve. It extends to the Kerak and Madaba mountains to the north and south, reaching 900 metres (3,000 ft) above sea level in some places. This 1,300-metre (4,300 ft) variation in elevation, combined with the valley's year round water flow from seven tributaries, means that Wadi Mujib enjoys a magnificent biodiversity that is still being explored and documented today. The reserve consists of mountainous, rocky, and sparsely vegetated desert (up to 800 metres (2,600 ft)), with cliffs and gorges cutting through plateaus. Perennial, spring-fed streams flow to the shores of the Dead Sea.

Over 300 species of plants, 10 species of carnivores and numerous species of permanent and migratory birds have been recorded until this date. Some of the remote mountain and valley areas are difficult to reach, and thus offer safe havens for rare species of cats, goats and other mountain animals.

The slopes of the mountainous land are very sparsely vegetated, with a steppe-type vegetation on plateaus. Groundwater seepage does occur in places along the Dead Sea shore, for example at the hot springs of Zara, which support a luxuriant thicket of Acacia, Tamarix, Phoenix and Nerium, and a small marsh. The less severe slopes of the reserve are used by pastoralists for the grazing of sheep and goats.

The hot springs of Hammamat Ma'in lie close to the borders of the reserve are heavily used for tourism and recreation.

The Jordanian military have a temporary camp in the south of the reserve.

The Mujib Dam was completed in 2004 at the bottom of the wadi, where the modern road crosses the river. As a result, a large lake has formed. Today, Wadi Mujib is fed by seven tributaries.

As well as resident birds, the reserve is strategically important as a safe stop-over for the huge number of migratory birds which fly annually along the Great Rift Valley between Africa and northeast Europe. It is possible to see the following birds in Mujib:

Many carnivores also inhabit the various vegetation zones in Mujib, such as the striped hyena and the Syrian wolf. One of the most important animals in Mujib is the Nubian ibex, a large mountain goat which became threatened as a result of over-hunting.

View from a look-out north of the Wadi: 180° panorama image of Wadi Mujib: To the left is the Al Mujib dam (in the background), to the right the Wadi continues towards the Dead Sea. Note the individual sediment layers visible on the walls. 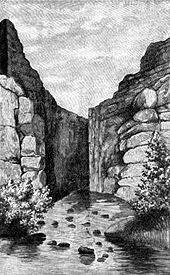 Gorge of the River Arnon Near Its Mouth. From Stade, "Geschichte des Volkes Israel."

Wadi Mujib, the biblical Arnon stream, has always been an important boundary-line. According to the Pentateuch, it once separated the Moabites from the Amorites (Numbers 21:13–26; Deuteronomy 3:8; Judges 11:18).

After the Hebrew settlement it divided, theoretically at least, Moab from the tribes of Reuben and Gad (Deuteronomy 3:12–16). But Moab, in fact, lay as much to the north as it did to the south of the Arnon. To the north, for example, were Aroer, Dibon, Medeba, and other Moabite towns. Even under Omri and Ahab, who held part of the Moabite territory, Israel did not hold sway farther south than Ataroth, about ten miles north of the Arnon.

Mesha, King of Moab, in his inscription (Mesha Stele, line 10) says that the Gadites (not the Reubenites) formerly occupied Ataroth, whence he in turn expelled the people of Israel. He mentions (line 26) his having constructed a road along the Arnon. The ancient importance of the river and of the towns in its vicinity is attested by the numerous ruins of bridges, forts, and buildings found upon or near it. Its fords are alluded to by the Book of Isaiah (16:2). Its "heights," crowned with the castles of chiefs, were also celebrated in verse (Numbers 21:28).