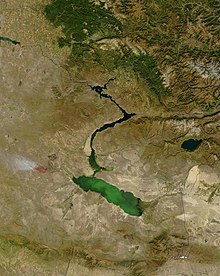 Lake Zaysan in Kazakhstan is one of the oldest lakes in the world.

An ancient lake is a lake that has consistently carried water for more than one million years. Many have existed for more than 2.6 million years, the full Quaternary period. Ancient lakes continue to persist due to plate tectonics in an active rift zone. This active rift zone creates lakes that are extremely deep and difficult to naturally fill with sediment. Due to the prolonged life of ancient lakes, they serve as models for isolated evolutionary traits and speciation. Most of the world's bodies of water are less than 18,000 years old. There are only 20 ancient lakes over 1 million years old.

Lake Baikal is often considered the oldest, as clear evidence shows that it is 25–30 million years old. Lake Zaysan may be even older, of Cretaceous origin and at least 65 million years old (most likely around 70 million years), but its exact age is controversial and labelled with some uncertainty. Another contender for oldest is Lake Maracaibo, estimated to be 20–36 million years old. In ancient times it was indisputably a true lake, but today it is saline and directly connected to the sea, leading many to consider it a large lagoon or bay.

There are six major types of lakes (Listed below). The majority of lakes dry up as the result of the filling with lacustrine deposits, sediment deposited from a river into a lake over thousands of years. Factors that influence the water level decreasing includes fluvial-lacustrine sediment build up, evaporation, natural drainage and geophysical processes. Ancient Lakes have a prolonged life when compared to younger more ordinary lakes due to the local active rift zones and subsided sections of land called grabens.

For example, Lake Baikal in Russia, the deepest lake in the world, is an ancient lake created by the Baikal Rift Zone which is 25–30 million years old and 5,387 feet (1,642 m) deep. This is compared to the North American Great Lakes, which were formed by the last glacial period by glacial scouring and the pooling of meltwater which are 14,000 years old, and have maximum depths ranging from 200–1,300 feet (60–400 m) deep.

Ancient lake formation is similar to that of a rift valley. Formation occurs within a graben that is located on an active rift zone. Grabens are sections of land, formed along divergent plate boundaries, which have subsided between two parallel plates. The location of the graben above the active rift zone results in a lake bottom that is constantly dropping in depth and walls increasing in height.

Ancient lakes allow scientists to study the mechanisms of environmental changes over glacial-interglacial timescales. Evolutionary characteristics including sexual selection, adaptive radiation and punctuated equilibrium are studied in ancient lakes due to their prolonged existence and general geographic isolation. Most of the research has been associated with the endemic fauna and diatoms that exists in these isolated lakes, concentrating on Lake Baikal, the Caspian Sea and the African Great Lakes. Information is derived from the associations of the fluvial-lacustrine, fluctuating profundal and evaporative facies.

These are the 20 ancient lakes in the world that have existed for more than 1 million years.