Lake Eyre (/ɛər/ AIR), officially known as Kati Thanda–Lake Eyre, is a lake without any outlet in east-central Far North South Australia, some 700 km (435 mi) north of Adelaide. The shallow lake is the depocentre of the vast endorheic Lake Eyre basin, and contains the lowest natural point in Australia at approximately 15 m (49 ft) below sea level (AHD), and on the rare occasions that it fills completely, is the largest lake in Australia covering an area up to 9,500 km2 (3,668 sq mi). When the lake is full, it has the same salinity level as seawater, but becomes hypersaline as the lake dries up and the water evaporates.

The lake was named in honour of Edward John Eyre, the first European to see it in 1840. The lake's official name was changed in December 2012 to combine the name "Lake Eyre" with the Aboriginal name, Kati Thanda. The native title over the lake and surrounding region is held by the Arabana people. 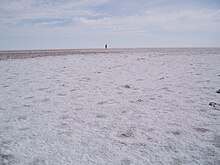 Kati Thanda–Lake Eyre is in the deserts of central Australia, in northern South Australia. The Lake Eyre Basin is a large endorheic system surrounding the lakebed, the lowest part of which is filled with the characteristic salt pan caused by the seasonal expansion and subsequent evaporation of the trapped waters. Even in the dry season, there is usually some water remaining in Kati Thanda–Lake Eyre, normally collecting in over 200 smaller sub-lakes within its margins. The lake was formed by aeolian processes after tectonic upwarping occurred to the south subsequent to the end of the Pleistocene epoch.

During the rainy season, rivers from the north-east part of the Lake Eyre Basin—in outback (south-west and central) Queensland—flow towards the lake through the Channel Country. The amount of water from the monsoon determines whether water will reach the lake and, if it does, how deep the lake will get. The average rainfall in the area of the lake is 100 to 150 millimetres (3.9 to 5.9 in) per year.

The −15 m (−49 ft) altitude usually attributed to Kati Thanda–Lake Eyre refers to the deepest parts of the lake floor, in Belt Bay and the Madigan Gulf. The shoreline lies at −9 m (−30 ft). The lake is the area of maximum deposition of sediment in the Lake Eyre Basin.

Since 1883, proposals have been made to flood Lake Eyre with seawater brought to the basin via a canal or pipeline. The purpose was, in part, to increase evaporation and thereby increase rainfall in the region downwind of an enlarged Lake Eyre. The added rainfall has been modeled as small. Due to the basin's low elevation below sea level and the region's high annual evaporation rate (between 2,500 and 3,500 millimetres (98 and 138 in)), such schemes have generally been considered impractical, as it is likely that accumulation of salt deposits would rapidly block the engineered channel. At a rate of 1 cm (0.39 in) evaporation per day, a 3 m (9.8 ft) viaduct flowing a 0.5 m/s (1.6 ft/s) would supply enough water to create a 100 km2 (39 sq mi) sea. If brine water was not sent back to the ocean, it would precipitate 90,000 long tons (91,000 t) of salt every year.

The salinity in the lake increases as the 450 mm (18 in) salt crust dissolves over a period of six months of a major flood, resulting in a massive fish kill. When over 4 m (13 ft) deep, the lake is no more salty than the sea, but salinity increases as the water evaporates, with saturation occurring at about a 500 mm (20 in) depth. The lake takes on a pink hue when saturated, due to the presence of beta-carotene pigment caused by the alga Dunaliella salina.

Typically a 1.5 m (5 ft) flood occurs every three years, a 4 m (13 ft) flood every decade, and a fill or near fill a few times a century. The water in the lake soon evaporates, with a minor or medium flood drying by the end of the following summer. Most of the water entering the lakes arrives via Warburton River.

Lake Eyre in 1990, as seen from the Space Shuttle Columbia

The 2009 Lake Eyre flood peaked at 1.5 m (5 ft) deep in late May, which is a quarter of its maximum recorded depth of 6 m (20 ft). 9 km3 (2 cu mi) of water crossed the Queensland–South Australian border with most of it coming from massive floods in the Georgina River. However, owing to the very low rainfall in the lower reaches of these rivers (contrasting with heavy rainfall in the upper catchments), the greater proportion soaked into the desert or evaporated en route to the lake, leaving less than 4 km3 (0.96 cu mi) in the lake, which covered an area of 800 km2 (309 sq mi), or 12% of the total. As the flood did not start filling the lake's deepest point (Belt Bay) until late March, little bird life appeared, preferring instead to nest in the upper reaches of the Lake Eyre Basin, north of Birdsville, where large lakes appeared in January as a result of monsoonal rain.

The high rainfall in summer 2010 sent flood water into the Diamantina, Georgina and Cooper Creek catchments of the Lake Eyre basin, with the Cooper Creek reaching the lake for the first time since 1990. The higher rainfall prompted many different birds to migrate back to the area for breeding.

Heavy local rain in early March 2011 in the Stuart Creek and Warriner catchments filled Lake Eyre South, with Lake Eyre North about 75 per cent covered with water firstly from the Neales and Macumba Rivers, and later from the Warburton River.

In late 2015, water began flowing into Lake Eyre following heavy rain in the north-east of the state.

In late March 2019, floodwaters began arriving as a result of torrential rains in northern Queensland in January. In the past, the water had taken anywhere from three to 10 months to reach the lake, but this time it arrived in two. The first flooding would be closely followed by another surge, following rains produced by Cyclone Trevor. Traditional owners and graziers agree that it is essential that the river run its course and should not be harvested during floods, as any interference in the natural systems could damage the ecosystem.

When the lake is full, a notable phenomenon is that around midday the surface can often become very flat. The surface then reflects the sky in a way that leaves both the horizon and water surface virtually impossible to see. The commodore of the Lake Eyre Yacht Club has stated that sailing during this time has the appearance of sailing in the sky.

Kati Thanda–Lake Eyre has been a site for various land speed record attempts on its salt flats, similar to those found in the Bonneville Salt Flats, especially those by Donald Campbell with the Bluebird-Proteus CN7.

Phytoplankton in the lake includes Nodularia spumigena and a number of species of Dunaliella.

Birds such as pelicans and banded stilts are drawn to a filled lake from southern coastal regions of Australia, and from as far afield as Papua New Guinea. During the 1989–1990 flood, it was estimated that 200,000 pelicans, 80% of Australia's total population, came to feed & roost at Lake Eyre. Scientists are presently unable to determine how such birds appear able to detect the filling of the lake, even when hundreds or thousands of kilometres away from the basin.

The extent of the lake is covered by two protected areas declared by the Government of South Australia - the Kati Thanda-Lake Eyre National Park and the Elliot Price Conservation Park.

Lake Eyre is on the list of wetlands of national importance known as A Directory of Important Wetlands in Australia.

Lake Eyre has been identified by BirdLife International as an Important Bird Area (IBA) known as the Lake Eyre Important Bird Area, because, when flooded, it supports major breeding events of the Banded stilt and Australian pelican, as well as over 1% of the world populations of Red-necked avocets, Sharp-tailed sandpipers, Red-necked stints, Silver gulls and Caspian terns.