Biogeochemistry is the scientific discipline that involves the study of the chemical, physical, geological, and biological processes and reactions that govern the composition of the natural environment (including the biosphere, the cryosphere, the hydrosphere, the pedosphere, the atmosphere, and the lithosphere). In particular, biogeochemistry is the study of the cycles of chemical elements, such as carbon and nitrogen, and their interactions with and incorporation into living things transported through earth scale biological systems in space through time. The field focuses on chemical cycles which are either driven by or influence biological activity. Particular emphasis is placed on the study of carbon, nitrogen, sulfur, iron, and phosphorus cycles. Biogeochemistry is a systems science closely related to systems ecology. 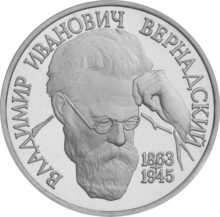 The founder of biogeochemistry was Russian and Ukrainian scientist Vladimir Vernadsky whose 1926 book The Biosphere, in the tradition of Mendeleev, formulated a physics of the Earth as a living whole. Vernadsky distinguished three spheres, where a sphere was a concept similar to the concept of a phase-space. He observed that each sphere had its own laws of evolution, and that the higher spheres modified and dominated the lower:

Human activities (e.g., agriculture and industry) modify the biosphere and abiotic sphere. In the contemporary environment, the amount of influence humans have on the other two spheres is comparable to a geological force (see Anthropocene).

The American limnologist and geochemist G. Evelyn Hutchinson is credited with outlining the broad scope and principles of this new field. More recently, the basic elements of the discipline of biogeochemistry were restated and popularized by the British scientist and writer, James Lovelock, under the label of the Gaia Hypothesis. Lovelock emphasizes a concept that life processes regulate the Earth through feedback mechanisms to keep it habitable.

There are biogeochemistry research groups in many universities around the world. Since this is a highly inter-disciplinary field, these are situated within a wide range of host disciplines including: atmospheric sciences, biology, ecology, geomicrobiology, environmental chemistry, geology, oceanography and soil science. These are often bracketed into larger disciplines such as earth science and environmental science.

Many researchers investigate the biogeochemical cycles of chemical elements such as carbon, oxygen, nitrogen, phosphorus and sulfur, as well as their stable isotopes. The cycles of trace elements such as the trace metals and the radionuclides are also studied. This research has obvious applications in the exploration for ore deposits and oil, and in remediation of environmental pollution.

Some important research fields for biogeochemistry include:

Retrieved from "https://en.wikipedia.org/w/index.php?title=Biogeochemistry&oldid=967926569"
Uses material from the Wikipedia article Biogeochemistry, released under the CC BY-SA 3.0 license.