Clint is a town in El Paso County, Texas, United States. The population was 926 at the 2010 census. It is part of the El Paso Metropolitan Statistical Area.

There were 308 households, out of which 35.4% had children under the age of 18 living with them, 64.6% were married couples living together, 14.3% had a female householder with no husband present, and 16.9% were non-families. 15.3% of all households were made up of individuals, and 7.1% had someone living alone who was 65 years of age or older. The average household size was 3.18 and the average family size was 3.58. 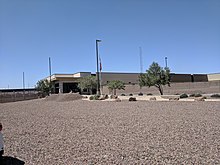 In 2019, approximately 250 unaccompanied migrant children were held at a Customs and Border Patrol facility near Clint. According to authorities, children received "hygiene products and food — including new clothing, hand sanitizer, soap and water;" showers were available at least "every three days," depending on the level of crowding. However, other visitors to the facility, including visitors affiliated with Human Rights Watch, reported "unsanitary, crowded living conditions," in which children lacked toothbrushes, showers, and soap, and suffered from flu and lice. One pediatric emergency physician described the treatment of children in the facility as reportable child neglect.

According to the Pacific Standard, "Sarah Fabian, the senior attorney in the Department of Justice's Office of Immigration Litigation, argued that the sorts of conditions children were experiencing in Customs and Border Protection custody in Clint were perfectly legal," as "safe and sanitary" in Reno v. Flores is a vague requirement which doesn't specify toothbrushes, soap, etc.

Educational programs for children in this type of facility were canceled by the Department of Health and Human Services in June 2019.

According to Martin Donell Kohout of The Handbook of Texas Online:

In the Robert A. Heinlein story The Year of the Jackpot, published in 1952, Clint is the home of a messianic cult that arises after the collapse of America. By radio donors are told to mark their contributions "Messiah" and send them there via Kingdom Messenger or pilgrim.

Clint was mentioned in the 1957 autobiographical novel On the Road by American novelist Jack Kerouac as the mailing address of XELO, a radio station based in Ciudad Juárez.

Clint, Texas, was also mentioned in Johnny Cash's 1966 song "Red River Valley" from the album Everybody Loves a Nut, in which Cash repeatedly states that he bought his first harmonica for $2.98 in Clint.