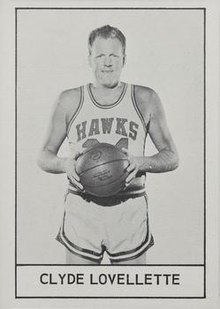 Lovellette fostered the trend of tall, physical and high-scoring centers. A two-time All-State performer at Garfield High School in Terre Haute, Indiana. As a high school junior (1946-47), Lovellette's previously undefeated high school team in Terre Haute, Indiana lost in the Indiana state championship finals to Shelbyville, Indiana led by Bill Garrett. The six-foot-nine Lovellette later attended the University of Kansas where he became a member of the Sigma Chi fraternity.

While at the University of Kansas he led Jayhawks to the 1952 NCAA title, capturing MVP honors and scoring a then-NCAA-record 141 points. A two-time first-team All-American at Kansas, Clyde led the Big Seven in scoring in each of his three seasons. Playing for Basketball Hall of Fame coach Forrest "Phog" Allen, Lovellette led the nation in scoring his senior year (1952, 28.4 ppg) and was named the Helms College Player of the Year.

Lovellette and basketball legend Dean Smith were teammates at Kansas. He is still the only college player to lead the nation in scoring and win the NCAA title in the same year. Lovellette's dominance in the paint landed him a place on the 1952 Summer Olympics gold medal team in Helsinki, Finland and he was the team's dominating player and leading scorer.

Lovelette was the 1st Round pick (#9) of the Minneapolis Lakers in the 1952 NBA draft.

At the pro level, Clyde became one of the first big men to move outside and utilize the one-handed set shot that extended his shooting range and offensive repertoire. This tactic enabled him to play either the small forward, power forward or center positions, forcing the opposition's big man to play out of position.

In 1972–73, he coached the Decatur Bullets of the Continental Basketball Association for one season before the team folded. He was paid $150 per game.

Lovellette was inducted into the Indiana Basketball Hall of Fame in 1982.

Lovelette had his #16 Jersey retired by the University of Kansas.

After retiring he participated in a variety of activities including serving as Sheriff of Vigo County, Indiana. He enjoyed farming and business activities. At Whites Residential Services, a faith-based school in Wabash County, Indiana for at-risk teenagers, he served for 20 years and was successful in providing a positive influence on their lives. He resided at one time in the small town of Munising in the Upper Peninsula of Michigan where he served as the Varsity Basketball Assistant Coach and on the city council.

Lovellette died from cancer in North Manchester, Indiana at the age of 86.