Interstate 235 (I-235) in Iowa is an auxiliary Interstate Highway that runs just north of downtown Des Moines through the heart of the Des Moines metropolitan area. I-235 runs from the junction of Interstate 35 and Interstate 80 in West Des Moines to the separation of the same two interstates in Ankeny. The highway is approximately 14 miles (23 km) long.

I-235, which had seen little improvement since its construction in the 1960s, was completely rebuilt and widened in a project that spanned most of the 2000s. Prior to the reconstruction, I-235 had two lanes in each direction with a third lane near downtown; the entire route now has at least three lanes of traffic in each direction, with an additional one or two lanes closer to the heart of the city. The modernized freeway now handles on average between 75,000–125,000 vehicles per day, making it the busiest highway in the state of Iowa.

Interstate 235 begins at the western intersection of Interstate 35 and Interstate 80, known locally as the West Mixmaster. Here, eastbound I-80 exits the highway, which becomes I-235 and joins northbound I-35. From the West interchange, I-235 heads east. Almost immediately is a half-diamond interchange with 50th Street in West Des Moines. One mile (1.6 km) later is a partial-cloverleaf interchange with Valley West Drive, which was renamed from 35th Street in 1988 due to its proximity to Valley West Mall and Valley High School.

Play media
Midday traffic on I-235

At the 63rd Street interchange, I-235 picks up a fourth lane of eastbound travel and drops a lane westbound. Now within the city limits of Des Moines, it passes the through the heavily wooded Waterbury neighborhood. Near the 42nd Street interchange, I-235 curves to the south around Theodore Roosevelt High School. Zero point five miles (0.80 km) later is an interchange with 31st Street, which provides access to Drake University to the north, and to Terrace Hill, the governor's mansion, to the south.

East of 31st Street, I-235 briefly picks up a fifth lane and drops a lane westbound, creating a 10-lane freeway just west of downtown. This stretch of freeway receives, on average, over 125,000 vehicles per day, making it the busiest stretch of road in the state.

There are three eastbound interchanges connecting I-235 to downtown Des Moines. Martin Luther King Jr. Parkway and 19th Street, a pair of one-way streets, lead traffic to the west of downtown. Keosauqua Way, known locally as Keo Way, enters downtown from the northwest. These interchanges are combined westbound. Closer to the Des Moines River, a combined interchange in each direction filters off the rest of downtown traffic to two destinations: Seventh Street and Sixth Avenue, and Third Street and Second Avenue, each of which are pairs of one-way streets. The fourth lane of traffic drops off at this combined interchange.

At the Des Moines River, I-235 passes Wells Fargo Arena, the main Iowa Events Center facility, which lies to the south along the western bank and the Greater Des Moines Botanical Garden to the north on the eastern bank. On the eastern side of Des Moines, it skirts the northern edge of the East Village, the Iowa State Capitol, and East High School before the interchange with U.S. Route 69. One mile (1.6 km) east is an interchange with East University Avenue, which, up to now had been relatively parallel to I-235. East University provides access to the Iowa State Fairgrounds for northbound I-35 and eastbound I-80 traffic.

At University Avenue, I-235 begins curving to the north, dividing an industrial district to the west and residential areas to the east. One and a half miles (2.4 km) to the north, it intersects East Euclid Avenue at a partial-cloverleaf interchange. It continues north for another one and a half miles (2.4 km) until it meets Interstate 35 and Interstate 80 again at the East interchange. 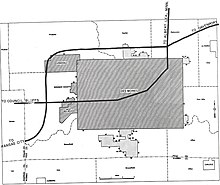 The current route of I-235 closely follows the original plans from 1955, seen here.

The first section of Interstate 235 to open, from Cottage Grove Avenue to Keo Way, opened on December 14, 1961. Over the next seven years, sections of I-235 opened, spreading east and west toward the interchanges until it was completed on October 30, 1968.

In March 2002, a six-year-long project to completely rebuild I-235 and the bridges which cross it began. The first two years consisted of rebuilding most of the bridges which cross it, starting with 42nd Street in West Des Moines. The final four years of the project entailed finishing the remaining bridges, widening, regrading, and repaving the entire length of the highway. 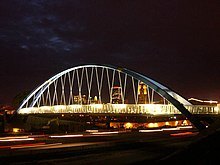 An additional part of the highway improvement plan were three pedestrian bridges, located at 40th, 44th, and East 6th Streets. The three bridges were replacements for bridges which were too narrow to accommodate the newly widened highway. These highly visible bridges act as icons, locating the neighborhoods for travelers along the freeway. The design of the I-235 pedestrian bridges was completed by Boston-based bridge designer Miguel Rosales in collaboration with HNTB Engineering. The three bridges, the Edna M. Griffin Memorial Bridge (East 6th Street), the 40th Street Pedestrian Bridge, and the Rider Way Pedestrian Bridge (44th Street) were each completed by 2005.

The new design utilizes basket-handle steel arches with clear spans of approximately 230 feet (70 m). Inclined cables connect the steel blue arches to the pre-stressed concrete deck. By selecting a tied arch form, the Iowa Department of Transportation was able to keep disruption of traffic to a minimum during construction. An innovative curved screen system is used to enhance security and the appearance of the structure creating a visually appealing experience for pedestrians and bicyclists using the bridge. The resulting series of bridges has created a distinctive form that is unique to the city and the state.

The entire route is in Polk County.