Interstate 35 (I-35) is a north–south Interstate Highway in the United States that runs from Laredo, Texas, to Duluth, Minnesota. In Iowa, the highway runs from south to north through the center of the state, roughly parallel to U.S. Highway 69 (US 69) and US 65. It enters the state near Lamoni from Missouri and continues north through the southern Iowa drift plain. In the Des Moines area, I-35 is overlapped by I-80 and the two routes bypass Des Moines to the west and north. I-235, the only auxiliary route of I-35, serves the suburbs and downtown Des Moines; it begins and ends at the two interchanges where I-35 and I-80 meet. Near Mason City and Clear Lake, US 18 and Iowa Highway 27 (Iowa 27) overlap with I-35. Shortly after, US 18 splits off to the west in Clear Lake, while Iowa 27 runs with I-35 until they reach the Minnesota state line.

I-35 enters Iowa at the Missouri state line near the town of Lamoni. An interchange that provides access to the adjacent US 69 is situated over the state border. The highway travels to the north-northeast for four miles (6.4 km) until it again meets US 69 on the eastern edge of Lamoni. North of Lamoni is a rest area which overlooks the Grand River and provides pedestrian access to Decatur County's Slip Bluff County Park. North of the Grand River, the interstate straightens to a north–south alignment. Near Decatur City, it intersects Iowa Highway 2 (Iowa 2) at a diamond interchange. Continuing north, the interstate slightly eases to the east. Two rural interchanges and another in Van Wert dot the 21 miles (34 km) separating Decatur City and Osceola.

The Osceola area is served by three interchanges for 1I-35. The first is a partial cloverleaf interchange with US 34. This junction is so configured because of US 34's proximity to the BNSF Railway line which carries Amtrak's California Zephyr. The next exit serves a casino and western Osceola. Northwest of Osceola is the western end of Iowa 152, which connects I-35 and US 69 at a narrow point between the two routes. Further north, the small towns of New Virginia, Truro, and St. Charles are each served by an interchange. The Iowa 92 exit just east of Bevington connects I-35 to the larger communities of Winterset and Indianola, to the west and east, respectively. The interchange for Cumming is the last before the interstate enters the Des Moines metropolitan area.

I-35 continues north, enters the Des Moines metropolitan area and meets the Iowa Highway 5 freeway at West Des Moines. Further on in West Des Moines, at the West Mixmaster Interchange, I-35 meets Interstates 80 and 235. I-235 serves downtown Des Moines, while I-35 and I-80 overlap and serve the Des Moines' western and northern suburbs. On the Clive/Urbandale city border, I-35 and I-80 meet U.S. Highway 6. Further north in Urbandale, they meet Iowa Highway 141 and turn eastward. They also meet U.S. Highway 69 north of Des Moines. Between Des Moines and Ankeny, at the East Mixmaster interchange, I-35 and I-80 separate at an interchange where they also meet I-235. 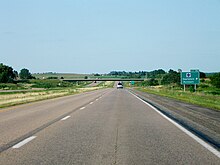 Interstate 35 in Cerro Gordo county, near Exit 182. Swaledale is about one mile to the east.

The Iowa DOT operates 37 rest areas and one scenic overlook in 20 locations along its 780 miles (1,260 km) of interstate highway. Along I-35, there are five locations that have facilities accessible to each direction of traffic. A sixth is under construction in northern Polk County. Parking areas are divided so passenger automobiles are separated from large trucks. Common among all of the rest stops are separate men's and women's restrooms, payphones with TDD capabilities, weather reporting kiosks, vending machines, and free wireless Internet. Many stations have family restrooms and dump stations for recreational vehicles.

The first rest areas along Iowa's interstates were built in the 1960s. They were modest facilities; separate buildings housed the restrooms and vending machines. A few rest stops had another building with local tourist information. The newer facilities feature one large building housing as many as 28 more toilets than the older buildings, in addition to all the other common rest area amenities. They also feature artwork by local Iowa artists. Each new rest area is designed around a theme. For instance, the facility near Story City celebrates the history of transportation in the state. Story County is the home of the Iowa Department of Transportation and the location where the historic Lincoln Highway and I-35 intersect.