Jared Mason Diamond (born September 10, 1937) is an American geographer, historian, anthropologist, ornithologist, and author best known for his popular science books The Third Chimpanzee (1991); Guns, Germs, and Steel (1997, awarded a Pulitzer Prize); Collapse (2005), The World Until Yesterday (2012), and Upheaval (2019). Originally trained in biochemistry and physiology, Diamond is known for drawing from a variety of fields, including anthropology, ecology, geography, and evolutionary biology. He is a professor of geography at UCLA.

In 2005, Diamond was ranked ninth on a poll by Prospect and Foreign Policy of the world's top 100 public intellectuals.

Diamond was born on September 10, 1937 in Boston, Massachusetts, United States. Both of his parents were from Ashkenazi Jewish families who had emigrated to the United States. His father, Louis Diamond, was a physician from who emigrated from Chișinău, and his mother, Flora (Kaplan), a teacher, linguist, and concert pianist. Diamond began studying piano at age six. Years later, he would propose to his wife after playing the Brahms Intermezzo in A major for her.

Already at the age of seven he developed interest in bird-watching. This became one of his major life-passions and resulted in a number of works published in ornithology.

At the age of 15 for the first time his parents took him outside of the eastern U.S., to Montana, where they spent holidays at the Hirschy's family ranch on Big Hole River. In summer 1956, as a college student, he returned to the ranch to work. Later, impressed by the beauty of the state, he regularly spent here his own family holidays, and Montana and the Bitterroot Valley became one of the key examples in his book Collapse: How Societies Choose to Fail or Succeed .

He attended the Roxbury Latin School and earned a Bachelor of Arts in Biochemical Sciences from Harvard College in 1958 and a PhD on the physiology and biophysics of membranes in the gall bladder from Trinity College, University of Cambridge in 1961. 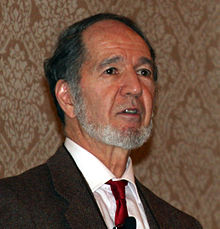 After graduation from Cambridge, Diamond returned to Harvard as a Junior Fellow until 1965, and, in 1968, became a professor of physiology at UCLA Medical School. While in his twenties he developed a second, parallel, career in ornithology and ecology, specialising in New Guinea and nearby islands, which he began visiting from 1964. Later, in his fifties, Diamond developed a third career in environmental history and became a professor of geography at UCLA, his current[update] position. He also teaches at LUISS Guido Carli in Rome. He won the National Medal of Science in 1999 and Westfield State University granted him an honorary doctorate in 2009.

Diamond originally specialized in salt absorption in the gall bladder. He has also published scholarly works in the fields of ecology and ornithology, but is arguably best known for authoring a number of popular-science books combining topics from diverse fields other than those he has formally studied. Because of this academic diversity, Diamond has been described as a polymath.

Diamond's first popular book, The Third Chimpanzee: The Evolution and Future of the Human Animal (1991), examines human evolution and its relevance to the modern world, incorporating evidence from anthropology, evolutionary biology, genetics, ecology, and linguistics. The book traces how humans evolved to be so different from other animals, despite sharing over 98% of our DNA with our closest animal relatives, the chimpanzees. The book also examines the animal origins of language, art, agriculture, smoking and drug use, and other apparently uniquely human attributes. It was well received by critics and won the 1992 Rhône-Poulenc Prize for Science Books and the Los Angeles Times Book Prize.

His second and best known popular science book, Guns, Germs, and Steel: The Fates of Human Societies, was published in 1997. It asks why Eurasian peoples conquered or displaced Native Americans, Australians, and Africans, instead of vice versa. It argues that this outcome was not due to biological advantages of Eurasian peoples themselves but instead to features of the Eurasian continent, in particular, its high diversity of wild plant and animal species suitable for domestication and its east/west major axis that favored the spread of those domesticates, people, and technologies for long distances with little change in latitude.

The first part of the book focuses on reasons why only a few species of wild plants and animals proved suitable for domestication. The second part discusses how local food production based on those domesticates led to the development of dense and stratified human populations, writing, centralized political organization, and epidemic infectious diseases. The third part compares the development of food production and of human societies among different continents and world regions. Guns, Germs, and Steel became an international best-seller, was translated into 33 languages, and received several awards, including a Pulitzer Prize, an Aventis Prize for Science Books and the 1997 Phi Beta Kappa Award in Science. A television documentary series based on the book was produced by the National Geographic Society in 2005.

In his third book, Why is Sex Fun?, also published in 1997, Diamond discusses evolutionary factors underlying features of human sexuality that are generally taken for granted but that are highly unusual among our animal relatives. Those features include a long-term pair relationship (marriage), coexistence of economically cooperating pairs within a shared communal territory, provision of parental care by fathers as well as by mothers, having sex in private rather than in public, concealed ovulation, female sexual receptivity encompassing most of the menstrual cycle (including days of infertility), female but not male menopause, and distinctive secondary sexual characteristics.

Diamond's next book, Collapse: How Societies Choose to Fail or Succeed, published in 2005, examines a range of past societies in an attempt to identify why they either collapsed or continued to thrive and considers what contemporary societies can learn from these historical examples. As in Guns, Germs, and Steel, he argues against explanations for the failure of past societies based primarily on cultural factors, instead focusing on ecology. Among the societies mentioned in the book are the Norse and Inuit of Greenland, the Maya, the Anasazi, the indigenous people of Rapa Nui (Easter Island), Japan, Haiti, the Dominican Republic, and modern Montana.

The book concludes by asking why some societies make disastrous decisions, how big businesses affect the environment, what our principal environmental problems are today, and what individuals can do about those problems. Like Guns, Germs, and Steel, Collapse was translated into dozens of languages, became an international best-seller, and was the basis of a television documentary produced by the National Geographic Society. Some anthropologists and scholars criticized Diamond's methods and conclusions. Collapse was also nominated for the Royal Society Prize for Science Books.

In 2008, Diamond published an article in The New Yorker entitled "Vengeance Is Ours", describing the role of revenge in tribal warfare in Papua New Guinea. A year later two indigenous people mentioned in the article filed a lawsuit against Diamond and The New Yorker claiming the article defamed them. In 2013, The Observer reported that the lawsuit "was withdrawn by mutual consent after the sudden death of their lawyer."

In 2010, Diamond co-edited (with James Robinson) Natural Experiments of History, a collection of seven case studies illustrating the multidisciplinary and comparative approach to the study of history that he advocates. The book's title stems from the fact that it is not possible to study history by the preferred methods of the laboratory sciences, i.e., by controlled experiments comparing replicated human societies as if they were test tubes of bacteria. Instead, one must look at natural experiments in which human societies that are similar in many respects have been historically perturbed. The book's afterword classifies natural experiments, discusses the practical difficulties of studying them, and offers suggestions on how to address those difficulties.

In The World Until Yesterday, published in 2012, Diamond asks what the western world can learn from traditional societies. It surveys 39 traditional small-scale societies of farmers and hunter-gatherers with respect to how they deal with universal human problems. The problems discussed include dividing space, resolving disputes, bringing up children, treatment of elders, dealing with dangers, formulating religions, learning multiple languages, and remaining healthy. The book suggests that some practices of traditional societies could be usefully adopted in the modern industrial world today, either by individuals or else by society as a whole.

In Upheaval: How Nations Cope with Crisis and Change Diamond examines whether nations can find lessons during crises in a way like people do. The nations considered are Finland, Japan, Chile, Indonesia, Germany, Australia, and the U.S. Diamond identifies four modern threats: nuclear weapons, climate change, limited resources, and extreme inequality.

Anand Giridharadas, reviewing for The New York Times, claimed the book contained many factual inaccuracies. Daniel Immerwahr, reviewing for The New Republic, reports that Diamond has "jettisoned statistical analysis" and the associated rigour, even by the standards of his earlier books, which have themselves sometimes been challenged on this basis.

Diamond is married to Marie Cohen, granddaughter of Polish politician Edward Werner. They have twin sons, born in 1987.