Julius Deion Randle (born November 29, 1994) is an American professional basketball player for the New York Knicks of the National Basketball Association (NBA). In his only season of college basketball with the Kentucky Wildcats, he was named a third-team All-American. He was drafted by the Los Angeles Lakers in the first round of the 2014 NBA draft with the seventh overall pick. In his regular-season debut, Randle broke his right leg and missed the remainder of his rookie season. After four years with the Lakers, he signed with the New Orleans Pelicans. He averaged a career-high 21.4 points per game in 2018–19, his only season with the Pelicans, before reaching a deal to join the Knicks. 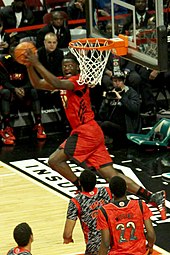 Randle attended Prestonwood Christian Academy where he was widely regarded as a top 5 player in the class of 2013 with Andrew Wiggins, Jabari Parker, Andrew Harrison, and Aaron Gordon.

Considered a five-star recruit by Rivals.com, Randle was listed as the No. 1 power forward and the No. 2 player in the nation in 2013.

The weekend after Thanksgiving in his senior season, Randle fractured his foot playing in a tournament and missed three months as a result. In March 2013, Randle returned for the TAPPS 5A playoffs and led his team to its third state title in four years. As a senior in 2012–13, Randle averaged 32.5 points and 22.5 rebounds per game.

On March 20, 2013, Randle committed to Kentucky, choosing them over Texas, Kansas and Florida. He then joined Andrew Harrison, his twin brother Aaron Harrison, James Young, Dakari Johnson and Marcus Lee as the sixth Kentucky player selected to play in the 2013 McDonald's All-American Boys Game as well as the 2013 Jordan Brand Classic.

On February 28, 2014, Randle was named one of the 10 semi-finalists for the Naismith College Player of the Year. He went on to help Kentucky reach the national championship game, which they lost to the University of Connecticut. He ended the 2013–14 season with 24 double-doubles, the second most double-doubles by a UK player in school history, behind Dan Issel's 25 in 1969–70, and the most double-doubles by a UK freshman (the previous record was shared by DeMarcus Cousins and Anthony Davis at 20). In 40 games (all starts), he averaged 15.0 points, 10.4 rebounds and 1.4 assists in 30.8 minutes per game.

On April 22, 2014, Randle declared for the NBA draft, foregoing his final three years of college eligibility.

Randle was selected with the seventh overall pick in the 2014 NBA draft by the Los Angeles Lakers. On October 28, 2014, after only 14 minutes of official NBA playing time, Randle broke his right tibia during the Lakers' 2014–15 season opener against the Houston Rockets. He underwent successful surgery the following day to repair the fracture, and subsequently missed the rest of the season. On March 9, 2015, he was cleared to participate in full weight-bearing, non-contact basketball activities.

Randle returned to action in July 2015 with the Lakers' Summer League team. Exactly a year after injuring himself in his NBA debut, Randle had 15 points and 11 rebounds as a starter in a 112–111 season-opening loss to the Minnesota Timberwolves. Randle had a solid outing on November 1 against the Dallas Mavericks, recording 22 points, 15 rebounds, four assists, four steals and one block in a 103–93 loss. On December 2, he recorded 15 points and a then career-high 19 rebounds in a 108–104 win over the Washington Wizards. On January 29, 2016, he scored a career-high 23 points in a loss to the Los Angeles Clippers. He matched that mark on March 8, recording 23 points and 11 rebounds in a 107–98 win over the Orlando Magic. On March 25, he recorded his first career triple-double with 13 points, 18 rebounds and a then career-high 10 assists in a 116–105 loss to the Denver Nuggets. At 21 years old, he became the youngest Lakers player with a triple-double since Magic Johnson. Six days later, he hit a game winning hook shot in the paint with 1.9 seconds left in overtime to lift the Lakers to a 102–100 win over the Miami Heat. On April 6, he set a career high with 20 rebounds in a 91–81 loss to the Clippers.

In the 2016 offseason, Randle joined the US Select Team that practiced against the United States men's national team ahead of the 2016 Summer Olympics.

On July 2, 2018, the Lakers renounced Randle, making him an unrestricted free agent.

Randle is the son of Carolyn Kyles, who played basketball at Texas. He is a devout Christian. In college, he visited the team chapel before every home game and has said, "God is my everything".

Randle is married to Kendra Shaw. On December 23, 2016, Shaw gave birth to the couple's first child, a son named Kyden.