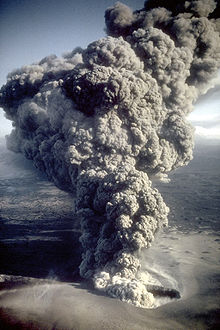 Ukinrek Maars as a result of the phreatomagmatic activity

The Devil Mountain Lakes, located on the Seward Peninsula in western Alaska – the largest maar-based lakes in the world.

A maar is a broad, low-relief volcanic crater caused by a phreatomagmatic eruption (an explosion which occurs when groundwater comes into contact with hot lava or magma). A maar characteristically fills with water to form a relatively shallow crater lake which may also be called a maar. The name comes from a Moselle Franconian dialect word used for the circular lakes of the Daun area of Germany.

Maars are shallow, flat-floored craters that scientists interpret as having formed above diatremes as a result of a violent expansion of magmatic gas or steam; deep erosion of a maar presumably would expose a diatreme. Maars range in size from 60 to 8,000 m (200 to 26,250 ft) across and from 10 to 200 m (33 to 656 ft) deep; most maars commonly fill with water to form natural lakes. Most maars have low rims composed of a mixture of loose fragments of volcanic rocks and rocks torn from the walls of the diatreme.

Maar lakes, also referred to simply as maars, occur when groundwater or precipitation fills the funnel-shaped and usually round hollow of the maar depression formed by volcanic explosions. Examples of these types of maar are the three maars at Daun in the Eifel mountains of Germany.

A dry maar results when a maar lake dries out, becomes aggraded or silted up. An example of the latter is the Eckfelder Maar. Near Steffeln is the Eichholzmaar (also called the Gussweiher) which has dried out during the last century and is being renaturalised into a maar. In some cases the underlying rock is so porous that maar lakes are unable to form. After winters of heavy snow and rainfall many dry maars fill partially and temporarily with water; others contain small bogs or often artificial ponds that, however, only occupy part of the hollow.

The largest known maars are found at Espenberg on the Seward Peninsula in northwest Alaska. These maars range in size from 4,000 to 8,000 m (13,000 to 26,000 ft) in diameter and a depth up to 300 m (980 ft). These eruptions occurred in a period of about 100,000 years, with the youngest (the Devil Mountain Maar) occurring about 17,500 years ago. Their large size is due to the explosive reaction that occurs when magma comes into contact with permafrost. Hydromagmatic eruptions are increasingly explosive when the ratio of water to magma is low. Since permafrost melts slowly, it provides a steady source of water to the eruption while keeping the water to magma ratio low. This produces the prolonged, explosive eruptions that created these large maars. Examples of the Seward Peninsula maars include North Killeak Maar, South Killeak Maar, Devil Mountain Maar and Whitefish Maar.

Maars occur in western North America, Patagonia in South America, the Eifel region of Germany (where they were originally described), and in other geologically young volcanic regions of Earth. Elsewhere in Europe, La Vestide du Pal in the Ardèche department of France provides a spectacular example of a maar easily visible from the ground or air. Kilbourne Hole and Hunt's Hole, in southern New Mexico near El Paso, Texas, are maars. The Crocodile Lake in Los Baños in the Philippines was originally thought of as a volcanic crater is also a maar. The notorious, carbon dioxide-saturated Lake Nyos in Africa is another example. An excellent example of a maar is Zuni Salt Lake in New Mexico, a shallow saline lake that occupies a flat-floored crater about 6,500 ft (2,000 m) across and 400 ft (120 m) deep. Its low rim is composed of loose pieces of basaltic lava and wall rocks (sandstone, shale, limestone) of the underlying diatreme, as well as random chunks of ancient crystalline rocks blasted upward from great depths. Maars in Canada are found in the Wells Gray-Clearwater volcanic field of east-central British Columbia and in kimberlite fields throughout Canada. A notable field of maars is found in the Pali-Aike Volcanic Field in Patagonia, South America. and in the Sudanese Bayuda Volcanic Field. The Auckland volcanic field in the urban area of Auckland, New Zealand has several maars, including the readily accessible Lake Pupuke in the North Shore suburb of Takapuna.

One of the most notable craters misidentified as a maar is Arizona's Meteor Crater; for many years this was thought to be of volcanic rather than meteoric origin.

The three maars at Daun (from front to rear): the Gemündener, Weinfelder and Schalkenmehrener Maar 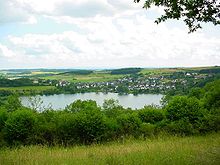 In the Volcanic Eifel there are about 75 maars. These include water-filled maar lakes, but the great majority are dry maars. Both types, lake-filled maars and dry maars, are typical of the Volcanic Eifel. The last eruptions took place at least 11,000 years ago and many maars in the Eifel are clearly older. For this reason many are very heavily eroded and their shapes and volcanic features are not as obvious as those of more recent or even active maars elsewhere in the early. Nevertheless, the maars of the Eifel are well preserved.

Water-filled maars of the Eifel

Dry maars of the Eifel 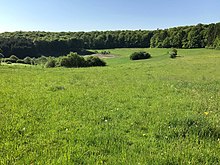 The Trockenmaar on the Hohe List
(1 km SW of Schalkenmehren)

In the Eifel and Volcanic Eifel there are numerous dry maars:

Broader use of the term maar

The following volcanic features are often colloquially referred to as a "maar" or "maar lake", although they are not, strictly speaking, maars:

Maars outside the Eifel

In Germany there are also several maars outside of the Eifel. A well-known example is the Messel pit, a former maar lake near Messel in the county of Darmstadt-Dieburg and which is known for its well preserved fossils. In addition in the Swabian Jura and the Albvorland (the Swabian Volcano) there are maar-forming volcanoes. Because the over 350 eruption points were only active in the Upper Miocene 17 to 11 million years ago, all the maars, apart from the dry maar, Randecker Maar and the Molach, are only detectable geologically. In the Ore Mountains near Hammerunterwiesenthal, the Hammerunterwiesenthal Maar formed about 30 million years ago during the Oligocene; the maar measures 2 kilometres from east to west and 1.4 kilometres from north to south.

The Chaîne des Puys in France contains numerous maars; Lake Albano in the Alban Mountains is a complex maar, and there is also a maar (Kolumbo) near Santorini in Greece. The Campo de Calatrava Volcanic Field in Spain contains numerous maars; a typical example being the maar of Hoya del Mortero at Poblete in the Province of Ciudad Real. Active maars were commonplace in Fife and Lothian, Scotland during the Carboniferous era.

In the US there are numerous maar areas, such as Alaska (Ukinrek Maars, Nunivak in the Bering Sea), in Washington (Battle Ground Lake), in Oregon (Fort Rock Basin with the maars of Big Hole, Hole-in-the-Ground, Table Rock), in Death Valley National Park, California (Ubehebe Crater), in Nevada (Soda Lakes) as well as the maars of the White Rock Canyon, Mount Taylor and Potrillo volcanic fields, Zuni Salt Lake Crater and Kilbourne Hole Crater in New Mexico.

In Central Mexico, the Tarascan volcanic field contains several maars in the states of Michoacán and Guanajuato. In Nicaragua is the maar of Laguna de Xiloa, part of the Apoyeque volcano. From South America, there are known maars in Chile (e.g. Cerro Overo and Cerro Tujle in northern Chile). Jayu Khota is a maar in Bolivia.

The maar of Birket Ram lies on the Golan Heights; further south maars occur in Africa (Bilate Volcanic Field and Haro Maja in the Butajiri-Silti-Volcanic Field, Ethiopia, the Bayuda Volcanic Field in the Sudan and Lake Nyos in the Oku Volcanic Field in Cameroon). In Saudi Arabia the Al Wahbah crater formed as a result of a maar eruption.

Koranga Maar and Numundo Maar are in Papua New Guinea. Kawah Masemo maar is a landform on Mount Sempu volcano in Indonesia. The San Pablo Volcanic Field in the Province of Laguna on the island of Luzon in the Philippines contains maars.

The Newer Volcanics Province in the States of South Australia and Victoria, Australia, is home to numerous maars, such as Mount Gambier, Mount Schank and Tower Hill, whose complex system of nested maars is enclosed by one of the largest maars in the world.

Retrieved from "https://en.wikipedia.org/w/index.php?title=Maar&oldid=1009309162"
Uses material from the Wikipedia article Maar, released under the CC BY-SA 3.0 license.