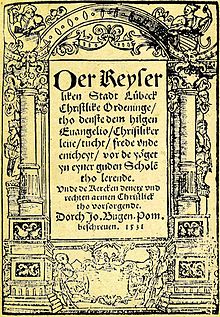 Eyne vorrede ouer dyt boek van reynken deme vosse, i.e. "A prologue about this book of Reynard the Fox". Reynard the Fox is an allegorical epic that was popular in medieval Europe. This is from the 1498 edition published in Lübeck, one of the major Hanseatic cities. The typeface is typical for the blackletter used in MLG printing.

Middle Low German or Middle Saxon (autonym: Sassisch, i.e. "Saxon", Standard High German: Mittelniederdeutsch, Modern Dutch: Middelnederduits) is a developmental stage of Low German. It developed from the Old Saxon language in the Middle Ages and has been documented in writing since about 1225/34 (Sachsenspiegel). During the Hanseatic period (from about 1300 to about 1600), Middle Low German was the leading written language in the north of Central Europe and served as a lingua franca in the northern half of Europe. It was used parallel to medieval Latin also for purposes of diplomacy and for deeds.

While Middle Low German (MLG) is a scholarly term developed in hindsight, speakers in their time referred to the language mainly as sassisch (Saxon) or de sassische sprâke (the Saxon language). This terminology was also still known in Luther's time in the adjacent Central German-speaking areas. Its Latin equivalent saxonicus was also used as meaning 'Low German' (among other meanings). Some languages whose first contacts with Germany were via Low German-speaking 'Saxons', took their name as meaning 'German' in general, e.g. Finnish saksa 'German'.

In contrast to Latin as the primary written language, speakers also referred to discourse in Saxon as speaking/writing to dǖde, i.e. 'clearly, intelligibly'. This contains the same root as dǖdisch 'German' (cf. High German: deutsch, both from Proto-Germanic *þiudiskaz 'popular, vernacular') which could also be used for Low German if the context was clear. Compare also the modern colloquial term Platt(dütsch) (from platt 'plain, simple') denoting Low (or West Central) German dialects in contrast to the written standard.

Another medieval term is ôstersch (lit. 'East-ish') which was at first applied to the Hanseatic cities of the Baltic Sea (the 'East Sea'), their territory being called Ôsterlant ('East-land'), their inhabitants Ôsterlinge ('Eastlings'). This appellation was later expanded to other German Hanseatic cities and it was a general name for Hanseatic merchants in the Netherlands, e.g. in Bruges where they had their komptôr (office; see Kontor).

In the 16th century, the term nedderlendisch (lit. 'Lowland-ish, Netherlandish') gained ground, contrasting Saxon with the German dialects in the uplands to the south. It became dominant in the High German dialects (as ENHG niderländisch, which could also refer to the modern Netherlands), while sassisch remained the most widespread term within MLG. The equivalent of 'Low German' (NHG niederdeutsch) seems to have been introduced later on by High German speakers and at first applied especially to Netherlanders.

Middle Low German is a modern term used with varying degrees of inclusivity. It is distinguished from Middle High German, spoken to the south, which was later replaced by Early New High German. Though Middle Dutch is today usually excluded from MLG (although very closely related), it is sometimes, esp. in older literature, included in MLG, which then encompasses the dialect continuum of all high-medieval Continental Germanic dialects outside MHG, from Flanders in the West to the eastern Baltic.

Middle Low German covered a wider area than the Old Saxon language of the preceding period, due to expansion to the East and, to a lesser degree, to the North.

In the East, the MLG-speaking area expanded greatly as part of the Ostsiedlung (settlement of the East) in the 12th to 14th century and came to include Mecklenburg, Brandenburg, Pomerania and (Old) Prussia, which were hitherto dominated by Slavic and Baltic tribes. Some pockets of these native peoples persisted for quite some time, e.g. the Wends along the lower Elbe until about 1700 or the Kashubians of Eastern Pomerania up to modern times.

In the North, the Frisian-speaking areas along the North Sea diminished in favour of Saxon, esp. in East Frisia which largely switched to MLG since the mid-14th century. North of the Elbe, MLG advanced slowly into Sleswick, against Danish and North Frisian, although the whole region was ruled by Denmark. MLG exerted a huge influence upon Scandinavia (cf. History), although native speakers of Low German were mostly confined to the cities where they formed colonies of merchants and craftsmen. It was an official language of Old Livonia, whose population consisted mostly of Baltic and Finnic tribes.

In the West, at the Zuiderzee, the forests of the Veluwe and close to the Lower Rhine, MLG bordered on closely related Low Franconian dialects whose written language was mainly Middle Dutch. In earlier times, these were sometimes included in the modern definition of MLG (cf. Terminology).

In the South, MLG bordered on High German dialects roughly along the northern borders of Hesse and Thuringia. The language border then ran eastwards across the plain of the middle Elbe until it met the (then more extensive) Sorb-speaking area along the upper Spree that separated it from High German. The border was never a sharp one, rather a continuum. The modern convention is to use the pronunciation of northern maken vs. southern machen ('to make') for determining an exact border. Along the middle Elbe and lower Saale rivers, Low German began to retreat in favour of High German dialects already during Late Medieval times (cf. Wittenberg whose name is Low German but whose inhabitants already spoke mostly/exclusively High German when the Reformation set in).

Sub-periods of Middle Low German are:

Middle Low German was the lingua franca of the Hanseatic League, spoken all around the North Sea and the Baltic Sea. It used to be thought that the language of Lübeck was dominant enough to become a normative standard (the so-called Lübecker Norm) for an emergent spoken and written standard, but more recent work has established that there is no evidence for this and that Middle Low German was non-standardised.

Middle Low German provided a large number of loanwords to languages spoken around the Baltic Sea as a result of the activities of Hanseatic traders. Its traces can be seen in the Scandinavian, Finnic, and Baltic languages, as well as Standard High German and English. It is considered the largest single source of loanwords in Danish, Estonian, Latvian, Norwegian and Swedish.

Beginning in the 15th century, Middle Low German fell out of favour compared to Early Modern High German, which was first used by elites as a written and, later, a spoken language. Reasons for this loss of prestige include the decline of the Hanseatic League, followed by political heteronomy of Northern Germany and the cultural predominance of Central and Southern Germany during the Protestant Reformation and Luther's translation of the Bible.

The description is based on Lasch (1914) which continues to be the authoritative comprehensive grammar of the language but is not necessarily up-to-date in every detail.

It has to be noted that it is not rare to find the same word in MLG affected by one of the following phonological processes in one text and unaffected by it in another text because the lack of a written standard, the dialectal variation and ongoing linguistic change during the Middle Low German (MLG) era.

Specific notes on stops and fricatives

Modern renderings of MLG (like this article) often use circumflex or macron to mark vowel length (e.g. â or ā) to help the modern reader, but original MLG texts marked vowel length not by accents but by doubling vowels, by adding a lengthening e or i, by doubling the following consonants (after short vowels) or by adding h after the following consonant(s).

Lasch distinguished the following large dialect groups, emphasising that she based it strictly on the orthography, which may often omit strongly dialectal phenomena in favour of more prestigious/"standard" forms. Nevertheless, the dialect groups broadly correspond with modern ones.

Some features: In the West, strong influence from Low Franconian orthographic patterns (e.g. e or i as a sign of length, like oi = /oː/). The "breaking" of old short vowels in open syllables and before /r/ was often marked in writing (e.g. karn instead of korn). Old geminated /jj/ and sometimes /ww/ was hardened into [g]; /ft/ frequently shifted to /xt/ (sometimes reversed in writing); /s/ instead of /ʃ/ (sal vs schal). The native present plural verbs was -et but the written norm often impressed -en. Similarly, the participal prefix ge- was usually written, though probably only spoken in the Southwest. Lexically, strong connections with adjacent dialects further north (East Frisian and Oldenburgish), e.g. godensdach ('Wednesday') instead of middeweke. Westphalian was and is often thought to be altogether the most conservative dialect group.

North Low Saxon (HG: Nordniedersächsisch, Dutch: Noord-Nedersaksisch): Spoken in a long stretch of coastal regions from the Zuiderzee in the West to East Prussia in the East. Its orthographic habits come closest to what was traditionally perceived as a MLG standard (the Lübeck standard, nowadays disputed).

Three subgroups can be distinguished:

(1) East Frisian and Oldenburgish, i.e. the areas west of the lower Weser, in the North including dialects on Frisian substrate. As can be expected, there is much Westphalian, Dutch and Frisian influence (hem next to em 'him'; plurals in -s; vrent next to vrünt 'friend').

(2) Nordalbingian, between the lower Weser and the lower Elbe, and also Holstein on the right bank of the lower Elbe. main towns: Hamburg, Bremen, Lunenburg, Kiel.

(3) East Elbian, including Lübeck and the areas further east, like Mecklenburg, Pomerania, northern Brandenburg (Prignitz, Uckermark, Altmark), Old Prussia, Livonia. Very close to Nordalbingian. While the Eastern dialects are today clearly distinguished from the West by their uniform present plural verb ending in -en (against Western uniform -(e)t), in MLG times, both endings competed against each other in West and East. Main towns: Lübeck, Wismar, Rostock, Stralsund. High German influence was strong in the Teutonic Order, due to the diverse regional origins of its chivalric elite, therefore MLG written culture was neglected early on.

Eastphalian (HG: Ostfälisch): Roughly the area east of the middle Weser, north and partly west of the Harz mountains, reaching the middle Elbe, but leaving out the Altmark region. In the north, the sparsely populated Lunenburg Heath forms something of a natural border. Main cities: Hanover, Hildesheim, Brunswick, Goslar, Göttingen, Magdeburg, Halle (early times). The area within the Elbe's drainage was established by colonisation and is in many ways special. The southern part of this Elbe Eastphalian (HG: Elbostfälisch) area switched to High German already in Late Medieval times.

Some features: Umlaut is more productive, occurring before -ich and -isch (e.g. sessisch 'Saxon, Low German') and shifting also e to i (e.g. stidde for stêde 'place'). Diphthongised short /o/ is rarely marked as such, contrary to other dialects. Before /r/, e and a are frequently interchanged for each other. Unstressed o (as in the suffix -schop) frequently changes into u (-schup). The modal verb for 'shall/should' features /ʃ/, not /s/ (i.e. schal). The past participle's prefix was commonly spoken e- but mostly written ge- under prescriptive influence. The local form ek ('I' (pron. 1.sg.)) competed with "standard" ik; in a similar way the oblique form mik ('me') with "standard" mî. Unusually, there is also a dative pronoun (1.sg. mê). Lexically, close connections with Nordalbingian. Unusual plural menne ('men').

Some features: Old long ê and ô were diphthongised into [iə] and [uə], written i and u. Old Germanic coda /n/ is restored, contrary to Ingvaeonic sound changes, e.g. gans 'goose'. Present plural of verbs features the suffix -en. Lack of negative determiner nên ('no' (attr.)), instead: keyn, similar to High German. The past participle retains the prefix ge-. Lack of gaderen ('to gather') and tőgen ('to show'); instead of them, forms close to High German, i.e. samenen and teigen. In East Anhaltish, distinction of dative and accusative pronouns (e.g. mi vs mik, cf. HG mir and mich).