Permanently stratified lake with layers of water that do not intermix

McGinnis Lake is a meromictic lake within the Petroglyphs Provincial Park.

Lac Pavin in France is a meromictic crater lake.

A meromictic lake is a lake which has layers of water that do not intermix. In ordinary, holomictic lakes, at least once each year, there is a physical mixing of the surface and the deep waters.

The term meromictic was coined by the Austrian Ingo Findenegg in 1935, apparently based on the older word holomictic. The concepts and terminology used in describing meromictic lakes were essentially complete following some additions by G. Evelyn Hutchinson in 1937.

Typical mixing pattern for a dimictic lake. This does not occur in meromictic lakes

Meromictic lakes can usually be divided into three sections or layers. The bottom layer is known as the monimolimnion; the waters in this portion of the lake circulate little, and are generally hypoxic and saltier than the rest of the lake. The top layer is called the mixolimnion, and essentially behaves like a holomictic lake. The area in between is referred to as the chemocline, also called the chemolimnion.

The lack of mixing between layers creates radically different environments for organisms to live in: among the consequences of this stratification, or stable layering, of lake waters is that the bottom layer receives little oxygen from the atmosphere, hence becomes depleted of oxygen. While the surface layer may have 10 mg/L or more dissolved oxygen in summer, the depths of a meromictic lake can have less than 1 mg/L. Very few organisms can live in such an oxygen-poor environment. One exception is purple sulfur bacteria. These bacteria, commonly found at the top of the monimolimnion in such lakes, use sulfur compounds such as sulfides in photosynthesis. These compounds are produced by decomposition of organic sediments in oxygen-poor environments. The monimolimnion is often rich in phosphorus and nitrogen. These factors combine to create an ideal environment for bacterial growth. The mixolimnion can have similar qualities. However, the types of bacteria that can grow at the surface are determined by the amount of light received at the surface.

A meromictic lake may form for a number of reasons:

Stratification in meromictic lakes can be either endogenic or ectogenic. Endogenic means the patterns seen in the lake are caused by internal events, such as organic matter accumulating in the sediments and decaying, whereas ectogenic means the patterns seen are caused by external causes, like an intrusion of saltwater settling in the hypolimnion, preventing it from mixing.

The layers of sediment at the bottom of a meromictic lake remain relatively undisturbed because there is little physical mixing and few living organisms to agitate them. There is also little chemical decomposition. For this reason, cores of the sediment at the bottom of meromictic lakes are important in tracing past changes in climate at the lake, by examining trapped pollen grains and the types of sediments [see Proxy (climate)].

When the layers do mix for whatever reason, the consequences can be devastating for organisms that normally live in the mixolimnion. This layer is usually much smaller in volume than the monimolimnion. When the layers mix, the oxygen concentration at the surface will decrease dramatically. This can result in the death of many organisms, such as fish, that require oxygen.

Occasionally, carbon dioxide (CO2) or other dissolved gases can build up relatively undisturbed in the lower layers of a meromictic lake. When the stratification is disturbed, as could happen from an earthquake, a limnic eruption may result. In 1986, a notable event of this type took place at Lake Nyos in Cameroon, causing nearly 1,800 deaths.

While it is mainly lakes that are meromictic, the world's largest meromictic basin is the Black Sea. The deep waters below 50 metres (150 feet) do not mix with the upper layers that receive oxygen from the atmosphere. As a result, over 90% of the deeper Black Sea volume is anoxic water. The Caspian Sea is anoxic below 100 metres (300 feet). The Baltic Sea is persistently stratified, with dense, highly saline water comprising the bottom layer, and large areas of hypoxic sediments (see Baltic Sea hypoxia).

Strandvatnet in Nordland down to the left; only a small isthmus separates the lake from Ofotfjord. 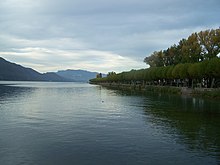 Lac du Bourget is the largest and deepest lake in France 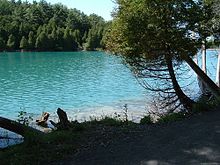 Green Lake is a meromictic lake near Syracuse, New York. 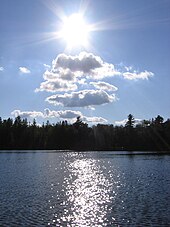 Sunfish Lake is a meromictic lake near Waterloo, Ontario.

Big Soda Lake is a meromictic lake in a volcanic crater near Fallon, Nevada

Soapy foam on the shore of Soap Lake in Washington

There are meromictic lakes all over the world. The distribution appears to be clustered, but this may be due to incomplete investigations. Depending on the exact definition of "meromictic", the ratio between meromictic and holomictic lakes worldwide is around 1:1000.