Type of non-acidic fresh-water wetland
This article is about the type of wetland. For other uses, see Fen (disambiguation).
Not to be confused with Fenn. 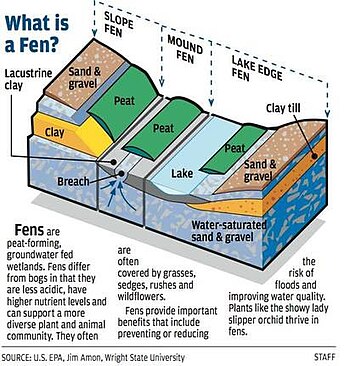 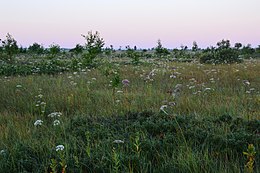 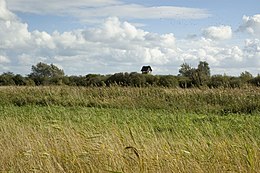 A fen is one of the main types of wetlands, the others being grassy marshes, forested swamps, and peaty bogs. Along with bogs, fens are a kind of mire. Fens are minerotrophic peatlands, usually fed by mineral-rich surface water or groundwater. They are characterized by their distinct water chemistry, which is pH neutral or alkaline, with relatively high dissolved mineral levels but few other plant nutrients. Continuous input of groundwater into fens maintains a stable water table throughout the course of a year. The stable water table helps maintain multiple defining characteristics of fens, namely the neutral pH, high base (Mg, Fe, Ca) saturation, and low nutrient availability. They are usually dominated by grasses and sedges, and typically have brown mosses. Fens frequently have a high diversity of other plant species including carnivorous plants such as Pinguicula. They may also occur along large lakes and rivers where seasonal changes in water level maintain wet soils with few woody plants. The distribution of individual species of fen plants is often closely connected to water regimes and nutrient concentrations.

Fens have a characteristic set of plant species, which sometimes provide the best indicators of environmental conditions. For example, fen indicator species in the State of New York include the flora Carex flava, Cladium mariscoides, Potentilla fruticosa, Pogonia ophioglossoides and Parnassia glauca.

Fens are distinguished from bogs, which are acidic, low in minerals, and usually dominated by sedges and shrubs, along with abundant mosses in the genus Sphagnum. Bogs also tend to exist on dome-shaped landmasses where they receive almost all of their usually-abundant moisture from rainfall, whereas fens appear on slopes, flats, or depressions and are fed by surface and underground water in addition to rain.

Fens have been damaged in the past by land drainage, and also by peat cutting. Some are now being carefully restored with modern management methods. The principal challenges are to restore natural water flow regimes, to maintain the quality of water, and to prevent invasion by woody plants.

Carr is the northern European equivalent of the wooded swamp of the southeastern United States, also known in the United Kingdom as wet woodland. It is a fens overgrown with generally small trees of species such as willow (Salix spp.) or alder (Alnus spp.). In general, fens may change in composition as peat accumulates. A list of species found in a fen can therefore cover a range of species from those remaining from the earlier stage in the successional development to the pioneers of the succeeding stage.

Where streams of base-rich water run through bog, these are often lined by strips of fen, separating "islands" of rain-fed bog.

Temporary flooding by beavers can have negative effects on fens.

Use of term in literature

Shakespeare used the term "fen-sucked" to describe the fog (literally: rising from marshes) in King Lear, when Lear says "Infect her beauty, You fen-sucked fogs drawn by the powerful sun, To fall and blister."

Retrieved from "https://en.wikipedia.org/w/index.php?title=Fen&oldid=996711216"
Uses material from the Wikipedia article Fen, released under the CC BY-SA 3.0 license.