Fishtown is a neighborhood in Philadelphia, Pennsylvania, United States. Located immediately northeast of Center City, its borders are somewhat disputed today due to many factors, but are roughly defined by the triangle created by the Delaware River, Frankford Avenue, and York Street. Some newer residents expand the area to Lehigh Avenue, while some older residents shrink the area to Norris Street. It is served by the Market–Frankford Line rapid transit subway/elevated line of the SEPTA system. Fishtown was formerly a working class Irish Catholic neighborhood, it has recently seen a large influx of young urban professionals and gentrification.

The name Fishtown derives from one of the original occupation of its residents. Early settlers were fishermen and over time they controlled the fishing rights to both sides of the Delaware River from Cape May to the falls at Trenton, NJ. The apocryphal local legend traces the name of Fishtown to Charles Dickens, who purportedly visited the neighborhood in March 1842, but records show this to be false, as it was named Fishtown prior to his visit, at least as early as 1808 as evidenced in a newspaper article in The Tickler an early 19th Century Philadelphia newspaper.

The area was originally inhabited by members of the Turtle Clan of the Lenape Indian tribe (whom the Europeans named the Delaware Indian Tribe). The first European settlers were a group of six Swedish farming families, later replaced by British landed gentry, then British shipbuilders and German fishermen. Fishtown was originally a small section of the town of Old Kensington, close to the Delaware River and just a few blocks long, roughly from Palmer Street north to Gunnar's Run, from the Delaware River to Moyer Street. The original town of Kensington was only 191.5 acres of land and originally called the Fairman Estate. Today's Penn Treaty Park sits where the Fairman Mansion once stood (actually Fairman Mansion sat in the middle of Beach Street, curb to curb, right north of Columbia Avenue). 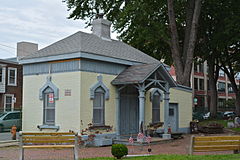 Kensington was founded by Captain Anthony Palmer, an Englishman by way of Barbados. Using proceeds from the sale of the Hope Farm estate (present day Port Richmond), which included three slaves named Abraham, Hannibal, and Phillis, Palmer purchased the Fairman Estate in 1729 and laid out his town and sold parcels to the local fishermen and shipbuilders. Anthony Palmer eventually became active in the provincial council and became acting Governor of Pennsylvania in 1747–1748. Palmer died in 1749 and was buried in Christ Church Cemetery in Philadelphia. (The Kensington Burial Grounds in Fishtown, also known as Palmer Cemetery, was founded around 1732 and is still an active burial ground, situated on land deeded to the community by the Palmer Family after Anthony Palmer's death. It is believed that the cemetery was in use from about the time Palmer started to lay out the town of Kensington, but the actual date of the first burial is unknown.)

Within a few generations there was another influx of German immigrants, then still later in the late 19th century Polish and Irish Catholic immigrants. The community has two Roman Catholic Churches, St. Laurentius, built by the Polish immigrants, and the Holy Name of Jesus, built predominantly by Irish immigrants. Holy Name continues to serve as the parish church, however St. Laurentius has been closed and is now to be turned into apartments.

The neighborhood has been working class for centuries; poverty grew after jobs left during the deindustrialization era, which afflicted many "rust belt" cities, Fishtown's workers continued to maintain a stable working-class community. Most long-time residents trace their ancestry to Irish, German, and Polish Catholic immigrants. In an analysis of 2013 data, Fishtown was the third most segregated white neighborhood in Philadelphia (after Girard Estates and Bridesburg), with 96% white residents.

Since 2005 Fishtown has experienced moderate gentrification characterized by significant rises in housing prices and the opening of upscale art, entertainment, and dining establishments. An influx of artists and professionals has joined the ranks of police officers, fire fighters, nurses, carpenters, electricians, stonemasons, plumbers, sheet-metal workers, and teamsters. The neighborhood was chosen by the state of Pennsylvania to be the site of the SugarHouse Casino gaming complex on Delaware Avenue near Frankford Avenue. This choice deeply divided the neighborhood, causing conflict between those who believe it will bring jobs and economic development and those who believe it will lead to increased crime, addiction, and other social problems which negatively impact quality of life. A Community Benefits Agreement was reached between SugarHouse Casino and the membership of Fishtown Action and the New Kensington CDC, which will provide money for community projects that would not otherwise be available to the residents. 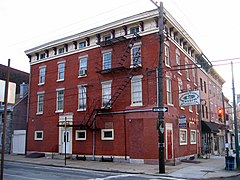 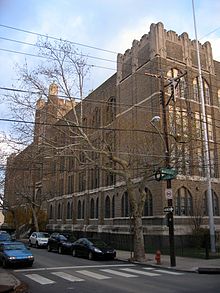 The comic book Fishtown (2007-8), by Kevin Colden, portrays a murder that occurred in Fishtown, based on the 2003 Murder of Jason Sweeney.

The neighborhood was partially filmed in and is a focal point in several episodes of the 2020 AMC television series Dispatches from Elsewhere, created by and starring Jason Segel.

Season 5 of Netflix's reboot series Queer Eye was shot in Philadelphia. Fishtown was the primary recording location for episode 1 "Preaching Out Loud".