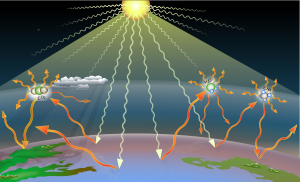 Light energy (white arrows) emitted by the sun warms the earth's surface, which reflects the energy as heat (orange arrows) that warms the atmosphere. Much of the heat is captured by greenhouse gas molecules such as water, carbon dioxide, and methane. 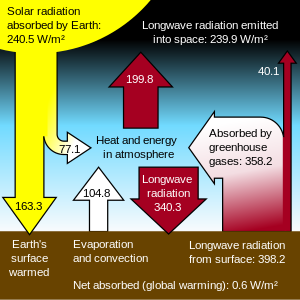 The greenhouse effect is the process by which radiation from a planet's atmosphere warms the planet's surface to a temperature above what it would be without this atmosphere.

Radiatively active gases (i.e., greenhouse gases) in a planet's atmosphere radiate energy in all directions. Part of this radiation is directed towards the surface, thus warming it. The intensity of downward radiation – that is, the strength of the greenhouse effect – depends on the amount of greenhouse gases that the atmosphere contains. The temperature rises until the intensity of upward radiation from the surface, thus cooling it, balances the downward flow of energy.

Earth's natural greenhouse effect is critical to supporting life, and initially was a precursor to life moving out of the ocean onto land. Human activities, mainly the burning of fossil fuels and clearcutting of forests, have increased the greenhouse effect and caused global warming.

The planet Venus experienced a runaway greenhouse effect, resulting in an atmosphere which is 96% carbon dioxide, and a surface atmospheric pressure roughly the same as found 900 m (3,000 ft) underwater on Earth. Venus may have had water oceans, but they would have boiled off as the mean surface temperature rose to the current 735 K (462 °C; 863 °F).

The existence of the greenhouse effect, while not named as such, was proposed by Joseph Fourier in 1824. The argument and the evidence were further strengthened by Claude Pouillet in 1827 and 1838. John Tyndall was the first to measure the infrared absorption and emission of various gases and vapours. From 1859 onwards, he showed that the effect was due to a very small proportion of the atmosphere, with the main gases having no effect, and was largely due to water vapour, though small percentages of hydrocarbons and carbon dioxide had a significant effect. The effect was more fully quantified by Svante Arrhenius in 1896, who made the first quantitative prediction of global warming due to a hypothetical doubling of atmospheric carbon dioxide. However, the term "greenhouse" was not used to refer to this effect by any of these scientists; the term was first used in this way by Nils Gustaf Ekholm in 1901. 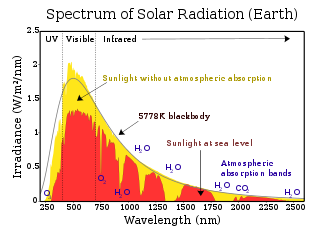 The idealized greenhouse model is a simplification. In reality the atmosphere near the Earth's surface is largely opaque to thermal radiation and most heat loss from the surface is by convection. However radiative energy losses become increasingly important higher in the atmosphere, largely because of the decreasing concentration of water vapor, an important greenhouse gas. Rather than the surface itself, it is more realistic to think of the greenhouse effect as applying to a layer in the mid-troposphere, which is effectively coupled to the surface by a lapse rate. A simple picture also assumes a steady state, but in the real world, the diurnal cycle as well as the seasonal cycle and weather disturbances complicate matters. Solar heating applies only during daytime. During the night, the atmosphere cools somewhat, but not greatly, because its emissivity is low. Diurnal temperature changes decrease with height in the atmosphere.

Within the region where radiative effects are important, the description given by the idealized greenhouse model becomes realistic. Earth's surface, warmed to an "effective temperature" around −18 °C (0 °F), radiates long-wavelength, infrared heat in the range of 4–100 μm. At these wavelengths, greenhouse gases that were largely transparent to incoming solar radiation are more absorbent. Each layer of the atmosphere with greenhouse gases absorbs some of the heat being radiated upwards from lower layers. It reradiates in all directions, both upwards and downwards; in equilibrium (by definition) the same amount as it has absorbed. This results in more warmth below. Increasing the concentration of the gases increases the amount of absorption and reradiation, and thereby further warms the layers and ultimately the surface below.

Greenhouse gases—including most diatomic gases with two different atoms (such as carbon monoxide, CO) and all gases with three or more atoms—are able to absorb and emit infrared radiation. Though more than 99% of the dry atmosphere is IR transparent (because the main constituents—N
2, O
2, and Ar—are not able to directly absorb or emit infrared radiation), intermolecular collisions cause the energy absorbed and emitted by the greenhouse gases to be shared with the other, non-IR-active, gases.

By their percentage contribution to the greenhouse effect on Earth the four major gases are:

Atmospheric gases only absorb some wavelengths of energy but are transparent to others. The absorption patterns of water vapor (blue peaks) and carbon dioxide (pink peaks) overlap in some wavelengths. Carbon dioxide is not as strong a greenhouse gas as water vapor, but it absorbs energy in longer wavelengths (12–15 micrometers) that water vapor does not, partially closing the "window" through which heat radiated by the surface would normally escape to space. (Illustration NASA, Robert Rohde)

It is not possible to assign a specific percentage to each gas because the absorption and emission bands of the gases overlap (hence the ranges given above). Clouds also absorb and emit infrared radiation and thus affect the radiative properties of the atmosphere.

Strengthening of the greenhouse effect through human activities is known as the enhanced (or anthropogenic) greenhouse effect. This increase in radiative forcing from human activity is attributable mainly to increased atmospheric carbon dioxide levels. According to the 2014 Assessment Report from the Intergovernmental Panel on Climate Change, "atmospheric concentrations of carbon dioxide, methane and nitrous oxide are unprecedented in at least the last 800,000 years. Their effects, together with those of other anthropogenic drivers, have been detected throughout the climate system and are extremely likely to have been the dominant cause of the observed warming since the mid-20th century'".

CO
2 is produced by fossil fuel burning and other activities such as cement production and tropical deforestation. Measurements of CO
2 from the Mauna Loa observatory show that concentrations have increased from about 313 parts per million (ppm) in 1960, passing the 400 ppm milestone on May 9, 2013. The current observed amount of CO
2 exceeds the geological record maxima (~300 ppm) from ice core data. The effect of combustion-produced carbon dioxide on the global climate, a special case of the greenhouse effect first described in 1896 by Svante Arrhenius, has also been called the Callendar effect.

Over the past 800,000 years, ice core data shows that carbon dioxide has varied from values as low as 180 ppm to the pre-industrial level of 270 ppm. Paleoclimatologists consider variations in carbon dioxide concentration to be a fundamental factor influencing climate variations over this time scale. 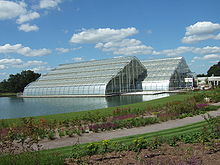 A modern greenhouse in RHS Wisley

A greenhouse is built of any material that passes sunlight: usually glass or plastic. The sun warms the ground and contents inside just like the outside, and these then warm the air. Outside, the warm air near the surface rises and mixes with cooler air aloft, keeping the temperature lower than inside, where the air continues to heat up because it is confined within the greenhouse. This can be demonstrated by opening a small window near the roof of a greenhouse: the temperature will drop considerably. It was demonstrated experimentally (R. W. Wood, 1909) that a (not heated) "greenhouse" with a cover of rock salt (which is transparent to infrared) heats up an enclosure similarly to one with a glass cover. Thus greenhouses work primarily by preventing convective cooling.

Heated greenhouses are yet another matter: as they have an internal source of heating, it is desirable to minimise the amount of heat leaking out by radiative cooling. This can be done through the use of adequate glazing.

It is possible in theory to build a greenhouse which lowers its thermal emissivity during dark hours; such a greenhouse would trap heat by two different physical mechanisms, combining multiple greenhouse effects, one of which more closely resembles the atmospheric mechanism, rendering the misnomer debate moot.

Bodies other than Earth

The 'greenhouse effect' on Venus is particularly large for several reasons:

"Venus experienced a runaway greenhouse in the past, and we expect that Earth will in about 2 billion years as solar luminosity increases".