Jack "Legs" Diamond (possibly born John Thomas Diamond, though disputed; July 10, 1897 – December 18, 1931), also known as Gentleman Jack, was an Irish American gangster in Philadelphia and New York City during the Prohibition era. A bootlegger and close associate of gambler Arnold Rothstein, Diamond survived a number of attempts on his life between 1916 and 1931, causing him to be known as the "clay pigeon of the underworld". In 1930, Diamond's nemesis Dutch Schultz remarked to his own gang, "Ain't there nobody that can shoot this guy so he don't bounce back?"

Diamond was born July 10, 1897, to Sara and John Diamond, who emigrated from Ireland in 1891 to Philadelphia, USA. In 1899, Jack's younger brother Eddie Diamond was born. Jack and Eddie both struggled through grade school, while Sara suffered from severe arthritis and other health problems. On December 24, 1913, Sara died from complications due to a bacterial infection and high fever. John Diamond, Sr. moved to Brooklyn shortly afterwards.

Diamond soon joined a New York street gang called the Hudson Dusters. Diamond's first arrest for burglary occurred when he broke into a jewelry store on February 4, 1914, with numerous arrests following throughout the rest of his life. Diamond served in the U.S. Army during World War I but deserted in 1918 or 1919 and was convicted and jailed for desertion. He served two years of a three- to five-year sentence at Levenworth Military Prison and after being released in 1921 Diamond became a thug and later personal bodyguard for Arnold Rothstein.

Diamond was known for leading a rather flamboyant lifestyle. He was a very energetic individual; his nickname "Legs" derived either from his being a good dancer or from how fast he could escape his enemies. His wife, Alice, was never supportive of his lifestyle but did not do much to dissuade him from it. Diamond was a womanizer; his best known mistress was showgirl and dancer Marion "Kiki" Roberts. The public loved Diamond; he was Upstate New York's biggest celebrity at the time.

Prohibition and the Manhattan Bootleg Wars

During the late 1920s Prohibition was in force, and the sale of beer and other alcohol was illegal in the United States. Diamond traveled to Europe to acquire beer and narcotics but failed. He did obtain liquor, which was dumped overboard in partially full barrels that floated onto Long Island as ships entered New York. He paid children a nickel for every barrel they brought to his trucks.

Following the death of Jacob "Little Augie" Orgen, Diamond went to work overseeing bootleg alcohol sales in downtown Manhattan. That brought him into conflict with Dutch Schultz, who wanted to move beyond his base in Harlem. He also ran into trouble with other gangs in the city. On July 14, 1929, in the New York Broadway Hotsy Totsy Club (partially owned by Diamond), Diamond and fellow gang member Charles Entratta shot three drunken brawlers in the club; two (William Cassidy and Simon Walker) were killed and one (Peter Cassidy) was severely wounded. The club's bartender, three waiters, and the hat check girl "vanished" (one of them was found shot dead in New Jersey). Diamond was not charged, but he was forced to close the club.

In 1930, Diamond and two henchmen kidnapped Grover Parks, a truck driver, in Cairo, New York, and demanded to know where he had obtained his load of hard cider. When Parks denied carrying anything, Diamond and his men beat and tortured Parks, eventually letting him go. A few months later, Diamond was charged with the kidnapping of James Duncan. He was sent to Catskill, New York, for his first trial, but he was acquitted. However, he was convicted in a federal case on related charges and sentenced to four years in jail. In a third trial,[clarification needed] in Troy, New York, he was acquitted.

In late August, 1930, Diamond boarded the ocean liner Belgenland in New York for a voyage to Antwerp, Belgium. He told reporters that his final destination was Vichy in France, where he would take a "cure" of the mineral waters for his health. However, the real reason was to look for sources of rye whiskey in Germany to import illegally into the United States. During the trip, Diamond allegedly won several thousand dollars in poker games with other passengers, who treated him like a celebrity. However, as soon as Diamond left the Belgenland, he was taken by Antwerp police to their headquarters. At the end of the day, Diamond agreed to voluntarily leave the country and was put on a train to Germany.

When Diamond's train reached the town of Aachen in Germany, agents of the German secret service arrested him. On September 6, the German government decided to deport Diamond. He was driven to Hamburg and placed on the freighter Hannover for passage to Philadelphia. On September 23, the Hannover arrived in Philadelphia and Diamond was immediately arrested by Philadelphia Police Department officers. At a court hearing that day, the judge said he would release Diamond if he left Philadelphia within the hour. Diamond agreed.

On October 24, 1924 Diamond was shot and wounded by shotgun pellets reportedly after trying to hijack liquor trucks belonging to the crime syndicate.

On October 16, 1927, Diamond tried to stop the murder of "Little Augie" (Jacob Orgen). Diamond's brother Eddie was Orgen's bodyguard, but Legs Diamond substituted for Eddie that day. As Orgen and Diamond were walking down a street on the Lower East Side of Manhattan, three young men approached them and started shooting. Orgen was fatally wounded and Diamond was shot two times below the heart. Diamond was taken to Bellevue Hospital, where he eventually recovered. The police interviewed Diamond in the hospital, but he refused to identify any suspects or help the investigation in any way. The police initially suspected that Diamond was an accomplice and charged him with homicide, but the charge was later dropped. The assailants were supposedly hired by Louis Buchalter and Gurrah Shapiro, who were seeking to move in on Orgen's garment-district labor rackets.

On October 12, 1930, Diamond was shot and wounded at the Hotel Monticello on the west side of Manhattan. Two men forced their way into Diamond's room and shot him five times before fleeing. Still in his pajamas, Diamond staggered into the hallway and collapsed. When asked later by the New York Police Commissioner how he managed to walk out of the room, Diamond said he drank two shots of whiskey first. Diamond was rushed to the Polyclinic Hospital in Manhattan, where he eventually recovered. On December 30, 1930, Diamond was discharged from Polyclinic.

On April 27, 1931, Diamond was again shot and wounded, this time at the Aratoga Inn, a road house near Cairo, New York. After eating in the dining room with three companions, Diamond walked out to the front door. He was shot three times and collapsed by the door. A local resident drove Diamond to a hospital in Albany, New York, where he eventually recovered. On May 1, while Diamond was still in the hospital, New York State Troopers seized over $5,000 worth of illegal beer and alcohol from Diamond's hiding places in Cairo and at the Aratoga Inn.

In August 1931, Diamond and Paul Quattrocchi went on trial for bootlegging. That same month, Diamond was convicted and sentenced to four years in state prison. In September 1931, Diamond appealed his conviction. 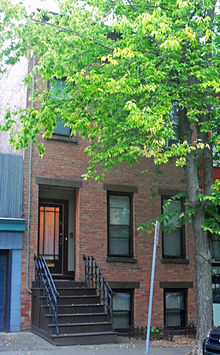 House at 67 Dove Street, where Diamond was murdered in 1931

On December 18, 1931, Diamond's enemies finally caught up with him. Diamond had been staying in a rooming house in Albany, New York, while on trial in Troy, New York, on kidnapping charges. On December 17, Diamond was acquitted. That night, Diamond and his family and friends were at a restaurant. At 1:00 a.m., Diamond went to visit his mistress, Marion "Kiki" Roberts. At 4:30 a.m., Diamond went back to the rooming house and passed out on his bed. Two gunmen entered his room around an hour later. One man held Diamond down while the other shot him three times in the back of the head.

There has been much speculation as to who was responsible for the murder; likely candidates include Dutch Schultz, the Oley Brothers (local thugs), the Albany Police Department, and relatives of Red Cassidy, another Irish American gangster at the time. According to William Kennedy's O Albany, Democratic Party Chairman Dan O'Connell, who ran the local political machine, ordered Diamond's execution, which was carried out by the Albany Police. The following are Dan O'Connell's own words recorded during a 1974 interview by Kennedy and appear on pages 203 and 204:

Given the power that the O'Connell machine held in Albany and its determination to prevent organized crime, other than their own, from establishing itself in the city and threatening their monopoly of vice, some accept this account of the story. For those believing this theory, Fitzpatrick's promotion to Chief of Police is said to have been a reward for executing Diamond. In 1945, Chief Fitzpatrick himself was shot and killed in his own office by John McElveney, an Albany police detective. Detective McElveney was sentenced to 20 years to life in prison. He was released in 1957 when his sentence was commuted by Governor W. Averell Harriman.

On December 23, 1931, Jack Diamond was buried at Mt Olivet Cemetery in Maspeth, Queens. There was no church service or graveside ceremony. Family and spectators numbering 200 attended Diamond's interment; no criminal figures were spotted.

On July 1, 1933, Diamond's widow, Alice Kenny Diamond (age 33), was found shot to death in her Brooklyn apartment. It was speculated that she was shot by Diamond's enemies to keep her quiet.