Classification of soil or sediment 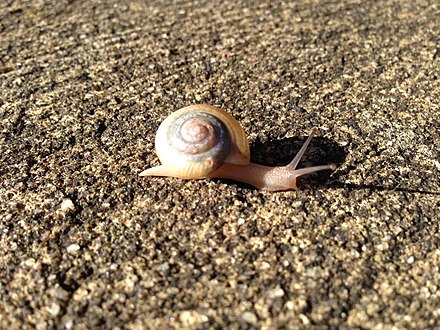 Snail over silt
For other uses, see Silt (disambiguation).

Silt is granular material of a size between sand and clay, whose mineral origin is quartz and feldspar. Silt may occur as a soil (often mixed with sand or clay) or as sediment mixed in suspension with water (also known as a suspended load) and soil in a body of water such as a river. It may also exist as soil deposited at the bottom of a water body, like mudflows from landslides. Silt has a moderate specific area with a typically non-sticky, plastic feel. Silt usually has a floury feel when dry, and a slippery feel when wet. Silt can be visually observed with a hand lens, exhibiting a sparkly appearance. It also can be felt by the tongue as granular when placed on the front teeth (even when mixed with clay particles).

Silt is created by a variety of physical processes capable of splitting the generally sand-sized quartz crystals of primary rocks by exploiting deficiencies in their lattice. These involve chemical weathering of rock and regolith, and a number of physical weathering processes such as frost shattering and haloclasty. The main process is abrasion through transport, including fluvial comminution, aeolian attrition and glacial grinding. It is in semi-arid environments that substantial quantities of silt are produced. Silt is sometimes known as "rock flour" or "stone dust", especially when produced by glacial action. Mineralogically, silt is composed mainly of quartz and feldspar. Sedimentary rock composed mainly of silt is known as siltstone. Liquefaction created by a strong earthquake is silt suspended in water that is hydrodynamically forced up from below ground level.

Silt is easily transported in water or other liquid and is fine enough to be carried long distances by air in the form of dust. Thick deposits of silty material resulting from deposition by aeolian processes are often called loess. Silt and clay contribute to turbidity in water. Silt is transported by streams or by water currents in the ocean. When silt appears as a pollutant in water the phenomenon is known as siltation.

Silt, deposited by annual floods along the Nile River, created the rich, fertile soil that sustained the Ancient Egyptian civilization. Silt deposited by the Mississippi River throughout the 20th century has decreased due to a system of levees, contributing to the disappearance of protective wetlands and barrier islands in the delta region surrounding New Orleans.

In southeast Bangladesh, in the Noakhali district, cross dams were built in the 1960s whereby silt gradually started forming new land called "chars". The district of Noakhali has gained more than 73 square kilometres (28 sq mi) of land in the past 50 years.

With Dutch funding, the Bangladeshi government began to help develop older chars in the late 1970s, and the effort has since become a multi-agency operation building roads, culverts, embankments, cyclone shelters, toilets and ponds, as well as distributing land to settlers. By fall 2010, the program will have allotted some 100 square kilometres (20,000 acres) to 21,000 families.

A main source of silt in urban rivers is disturbance of soil by construction activity. A main source in rural rivers is erosion from plowing of farm fields, clearcutting or slash and burn treatment of forests.

The fertile black silt of the Nile river's banks is a symbol of rebirth, associated with the Egyptian god Anubis.

Retrieved from "https://en.wikipedia.org/w/index.php?title=Silt&oldid=1004717132"
Uses material from the Wikipedia article Silt, released under the CC BY-SA 3.0 license.