Edward Bridge Danson III (born December 29, 1947) is an American actor and producer who played the lead character Sam Malone on the NBC sitcom Cheers, Jack Holden in the films Three Men and a Baby and Three Men and a Little Lady, and Dr. John Becker on the CBS sitcom Becker. He also starred in the CBS dramas CSI: Crime Scene Investigation and CSI: Cyber as D.B. Russell. Additionally, he plays a recurring role as a fictionalized version of himself on Larry David's HBO sitcom Curb Your Enthusiasm, starred alongside Glenn Close in legal drama Damages, and was a regular on the HBO comedy series Bored to Death. In 2015 he starred as Hank Larsson in the second season of FX's black comedy-crime drama anthology Fargo. From 2016 to 2020, he played the afterlife architect Michael in the NBC sitcom The Good Place. He currently plays Neil Bremer in NBC's Mr. Mayor.

During his career, Danson has been nominated for 18 Primetime Emmy Awards, winning two; 11 Golden Globe Awards nominations, winning three; one Screen Actors Guild Award; and one American Comedy Award and has been awarded a star on Hollywood's Walk of Fame. He was ranked second in TV Guide's list of the top 25 television stars. Danson has also been a longtime activist in ocean conservation. In March 2011, he published his first book, Oceana: Our Endangered Oceans and What We Can Do to Save Them, written with journalist Michael D'Orso.

In 1961, Danson enrolled in the Kent School, a prep school in Connecticut, where he was a star player on the basketball team. He became interested in drama while attending Stanford University and, seeking a better acting program, transferred to Carnegie Mellon University in Pittsburgh, where he received his Bachelor of Fine Arts in drama in 1972.

Danson began his television career as a contract player on the daytime soap opera Somerset. He played the role of "Tom Conway" from 1975 to 1976. In 1977 he played Dr. Mitchell Pierson on the daytime soap opera The Doctors, having also appeared earlier in 1975 as another character, Dr. Chuck Weldon. He was also in a number of commercials, most recognizably as the "Aramis man".

He made a number of guest appearances in episodic television in the late 1970s and early 1980s, including spots on Laverne & Shirley, B. J. and the Bear, Family, Benson, Taxi, Magnum, P.I., The Amazing Spider-Man and Tucker's Witch. 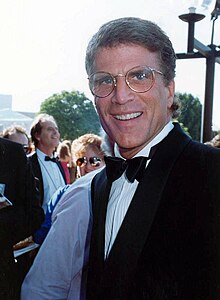 In 1982 Danson was cast as the womanizing former baseball player and bartender Sam Malone on the NBC sitcom Cheers, in which he has an on-and-off relationship with college-educated, sophisticated Diane Chambers. Though the show finished last in the ratings in the first season, it was well received by critics. Ratings gradually improved in 1983 and by 1986 Cheers was one of the top ten shows on TV. The show had a run of 11 seasons and its finale (May 20, 1993) was watched by 80 million people, becoming the second most watched finale in television history at that time. It won four Emmy Awards for Outstanding Comedy Series and a Golden Globe for Best Series – Musical or Comedy. The show ran from 1982 to 1993, with Danson receiving eleven consecutive Emmy nominations and nine Golden Globe nominations, ultimately winning two Emmys and two Golden Globes. In 2002, TV Guide named Cheers the 18th Greatest Show of All Time. It was also included in Time Magazine's 100 Greatest Shows of All Time.

Danson also appeared as Sam Malone in guest-starring roles on other sitcoms, such as Cheers spin-off Frasier, The Jim Henson Hour and The Simpsons.

Although he was best known for his work in comedy, he also appeared in a drama, Something About Amelia, about a family devastated by the repercussions of incest, which co-starred his later co-star on Damages, Glenn Close. He won a Golden Globe Award for Best Actor in a Miniseries or Television Movie and was nominated for an Emmy Award. In 1996, three years after Cheers concluded, Danson starred in the short-lived CBS sitcom Ink with his real-life wife Mary Steenburgen. In the same year, they starred as Lemuel Gulliver and his wife in an acclaimed television miniseries of Gulliver's Travels.

Danson went on to star in the successful CBS sitcom Becker (produced by Paramount Television, which also produced Cheers), which ran from 1998 to 2004. Danson also plays a fictionalized version of himself on Curb Your Enthusiasm. He reprised his role of Sam Malone in a second-season episode of Frasier and voiced him in The Simpsons episode "Fear of Flying".

In 1999 Danson was presented with a star on Hollywood's Walk of Fame.

Danson returned to series television in the fall of 2006, playing a psychiatrist in the ABC sitcom Help Me Help You, which was canceled at midseason due to low ratings.

In 2006 Danson received a nomination for a Screen Actors Guild Award for Outstanding Performance by a Male Actor in a TV Movie or Miniseries for his role in Knights of the South Bronx.

In 2007 Danson starred in the FX Network drama Damages as a corrupt billionaire, Arthur Frobisher. The role earned him an Emmy nomination for Outstanding Supporting Actor in a Drama Series but he lost to co-star Željko Ivanek. In the second season Danson became a recurring character instead of one of the principal cast. Nevertheless, Danson received an Emmy nomination for Outstanding Guest Actor in a Drama Series but lost to Michael J. Fox for his guest appearance in Rescue Me. 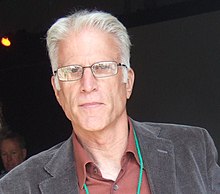 In 2011 Danson appeared in the music video for "Make Some Noise" by the Beastie Boys. He is also mentioned in the song's lyrics.

Danson starred in the HBO sitcom Bored to Death as George Christopher, the laconic and sometime downright infantile editor of Edition magazine. Critics often praised Danson as being the highlight of the program, calling his character a "scene stealer".

In July 2011 it was announced that Danson would star in the CBS police drama CSI: Crime Scene Investigation. He played D.B. Russell, a new graveyard shift supervisor who previously headed a crime lab in Seattle, Washington. Tony Shalhoub, Robin Williams and John Lithgow were also considered for the role.

In March 2013 it was confirmed that Danson had signed a deal extending his stay on CSI for two more years. Following the cancellation of CSI, it was announced that his character would make a move over to the third spinoff show CSI: Cyber in the second season. The show was cancelled after two seasons.

In 2015 Danson appeared in the second season of the TV show Fargo. He portrays sheriff Hank Larsson. From September 2016 to January 2020, Danson appeared opposite Kristen Bell as the character Michael in the NBC sitcom The Good Place. He has both been nominated for and won numerous awards for his performance as Michael.

In July 2019, Danson was cast as one of the main lead role for the situation comedy Mr. Mayor, in which he plays a wealthy businessman who runs for mayor of Los Angeles for all the wrong reasons. The series was greenlit by NBC as an entry in the 2020-2021 television season.

Danson has also been featured in numerous films. His most notable film appearances were in Three Men and a Baby with Tom Selleck and Steve Guttenberg, its sequel Three Men and a Little Lady and Cousins with Isabella Rossellini. He also appeared in The Onion Field (his first film, as the bagpipe-playing Officer Ian Campbell), Creepshow, Body Heat, Little Treasure, Just Between Friends (with Mary Tyler Moore), A Fine Mess, Dad, Made in America, Getting Even with Dad, Loch Ness, and Saving Private Ryan. 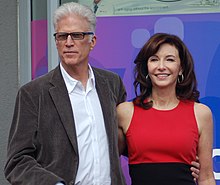 Danson and his first wife, actress Randall "Randy" Gosch (now professionally known as Randy Danson), were married in 1970 and divorced in 1975.

Danson's second wife was producer Cassandra "Casey" Coates; they were married in 1977. On December 24, 1979, while giving birth to their first daughter Kate, Coates suffered a stroke. Danson spent several years caring for her and helping her recuperate. They later adopted a second daughter, Alexis. Danson's affair with actress Whoopi Goldberg contributed to their divorce in 1993. It is known as one of Hollywood's costliest divorces, reportedly costing Danson $30 million.

On October 7, 1995, Danson married actress Mary Steenburgen, whom he met on the set of the movie Pontiac Moon in 1993, and became the stepfather to Steenburgen's children, Lilly and Charlie, from her previous marriage to actor Malcolm McDowell.

Danson has been on a vegan diet multiple times, but he currently adheres to a pescetarian diet.

While a guest on The Arsenio Hall Show in late 1988, he met actress Whoopi Goldberg, whom he described as "a sexy, funny woman". The two became friends, co-hosting Help Save Planet Earth in 1990, a video guide to saving the environment (Danson played himself, Goldberg played the role of Mother Earth). However while making Made in America in April 1992, the two became romantically involved—a pairing which was heavily featured in gossip tabloids such as the National Enquirer. The couple also appeared on the Rock the Vote TV special that same year, as well as being set to star in a Paramount-produced version of Neal Barrett Jr.'s Pink Vodka Blues, written by Marshall Brickman.

Danson experienced negative press attention on October 8, 1993, after his appearance wearing blackface at a Friars Club comedy roast in honor of Goldberg. Later, Goldberg defended the sketch, explaining that she had helped write much of the material and referred Danson to the makeup artist who painted his face as a societal critique. Danson and Goldberg issued statements emphasizing "the Friars Club tradition of raucous and over the top humor" and describing those offended as newcomers who "were uncomfortable with what to expect". Substantial excerpts from the performance were later printed in Spy. On November 5, 1993, Danson and Goldberg issued a statement signalling the end of their relationship.

Danson's interest in environmental concerns was ignited when he was twelve years old and Bill Breed, then curator of geology at the Museum of Northern Arizona, introduced Danson and friend Marc Gaede to a game he referred to as "billboarding". Armed with an axe and saw, Breed, Gaede, and Danson ended up destroying over 500 outdoor advertising signs.

Danson's interest in environmentalism continued over the years, and he began to be concerned with the state of the world's oceans. In the 1980s, he was a contributing founder of the American Oceans Campaigns, which merged with Oceana in 2001, where Danson is a board member. Danson's commitment to the environment led him to host the A&E television series "Challenge of the Seas" in 1991, filming 26 one hour episodes.

In March 2011 Danson published his first book, Oceana: Our Endangered Oceans And What We Can Do To Save Them, written with journalist Michael D'Orso.

On October 25, 2019, Danson was arrested and charged along with actress Jane Fonda at a climate change protest outside the United States Capitol at Washington, D.C.

Danson is a friend of former U.S. President Bill Clinton, who attended Danson and Mary Steenburgen's wedding. Danson has donated more than $85,000 to Democratic candidates, including Al Gore, John Edwards, Barbara Boxer, Bill Clinton, Al Franken and John Kerry. He has also donated to the Democratic Party of Arkansas and the Democratic Senatorial Campaign Committee. Danson and Steenburgen campaigned for Senator Hillary Clinton during her 2008 presidential campaign. He attended the wedding of their daughter Chelsea on July 31, 2010. He appeared with Steenburgen at the 2016 Democratic National Convention. On October 3, 2016, he helped open the new headquarters in Lancaster, PA at the old Queen Pharmacy on King Street for Hillary Clinton.