The Timbisha ("rock paint") are a Native American tribe federally recognized as the Death Valley Timbisha Shoshone Band of California. They are known as the Timbisha Shoshone Tribe and are located in south central California, near the Nevada border. As of the 2010 Census the population of the Village was 124. The older members still speak the ancestral language, also called Timbisha. 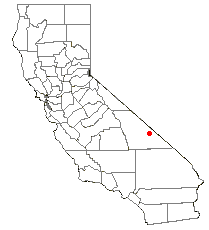 The Timbisha have lived in the Death Valley region of North America for over a thousand years. In 1933 President Herbert Hoover created Death Valley National Monument, an action that subsumed the tribe's homeland within park boundaries. Despite their long-time presence in the region, the proclamation failed to provide a homeland for the Timbisha people. After unsuccessful efforts to remove the band to nearby reservations, National Park Service officials entered into an agreement with tribal leaders to allow the Civilian Conservation Corps to construct an Indian village for tribal members near park headquarters at Furnace Creek in 1938. Thereafter tribal members survived within monument boundaries, although their status was repeatedly challenged by monument officials. They also lived in the Great Basin Saline Valley and northern Mojave Desert Panamint Valley areas of present-day southeastern California. The Death Valley south of Furnace Creek, California, and the Panamint Valley south of Ballarat, California were predominantly "Desert Kawaiisu", the adjoining areas to the north were composed of almost equal numbers of Timbisha (Panamint) Shoshone and "Desert Kawaiisu" (Julian Steward, 1938). Significantly, when borderlands were occupied, it was in fact common that settlements would include people speaking related but different languages.

Death Valley Indian Community, looking west toward the village from a hill one mile away across highway 190

Estimates for the pre-contact populations of most native groups in California have varied substantially. (See Population of Native California.) Alfred L. Kroeber put the combined 1770 population of the Timbisha (Koso) and Chemehuevi at 1,500. He estimated the population of the Timbisha and Chemehuevi in 1910 as 500. Julian Steward's figures for Eastern California are about 65 persons in Saline Valley, 150-160 persons in Little Lake (springs) and the Coso Range, about 100 in northern Panamint Valley, 42 in northern Death Valley, 29 at Beatty, and 42 in the Belted Range.

With the help of the California Indian Legal Services, Timbisha Shoshone members led by Pauline Esteves and Barbara Durham began agitating for a formal reservation in the 1960s. The Timbisha Shoshone Tribe was recognized by the US government in 1982. In this effort, they were one of the first tribes to secure tribal status through the Bureau of Indian Affairs' Federal Acknowledgment Process.

The tribe's reservation, the Death Valley Indian Community, was established in 1982. Located within Death Valley National Park at Furnace Creek in Death Valley, Inyo County, California. In 1990 it was 40 acres (0.16 km2) in size and had a population of 199 tribal member residents.

Currently the Timbisha Shoshone Tribe consists of around 300 members, usually 50 of whom live at the Death Valley Indian Community at Furnace Creek within Death Valley National Park. Many members spend the summers at Lone Pine in the Owens Valley to the west.

The Timbisha Shoshone (Tümpisa Shoshoni) have been known as the California Shoshoni, Death Valley Shoshone, Panamint Shoshone or simply Panamint. ″Coso, Koso, Koso Shoshone″ (probably a derivative of Koosotsi - ″People from Coso Hot Springs area″, the name of one local group of the Little Lake Band) once often used name was dropped in favor for Timbisha to avoid confusion with the historic Coso people of the same area.

The Timbisha called themselves Nümü Tümpisattsi (″Death Valley People″; literally: ″People from the Place of red ochre (face) paint)″) after the locative term for the Death Valley which was named after an important red ochre source for paint that can be made from a type of clay found in the Golden Valley a little south of Furnace Creek, California known as "Tümpisa", Tümpisakka, Tümpisakkatün" (Tümpisa - "rock (ochre) paint" - from tün/tümpin - ″rock, stone″ plus pisappüh/pisappin - ″red ochre, red (face) paint)″ + locative postposition -ka - ″at, on" + nominal suffix - tün). Sometimes they used even Tsakwatan Tükkatün (″Chuckwalla Eaters″) as a self designation (actually pejorative term which is a loan translation from the Mono people for the Timbisha Shoshone).

However, they simply called themselves Nümü ("Person" or ″People″).

The Kawaiisu (and other Indian tribes south of Timbisha territory) were known as Mukunnümü (″Hummingbird people″), their northern neighbors, the Eastern Mono (Owens Valley Paiute) were called Kwinawetün ("north place people"), the Western Mono beyond the Sierra Nevada crest to the northwest were called Panawe ("western people"), and their direct western neighbors, the Tübatulabal were known as Waapi(ttsi) ("enemy"). The Yokuts (and other Indian tribes on the western side of the Sierras) were known as Toyapittam maanangkwa nümü ("people on the other (western) side of Sierras"). Their Western and Northern Shoshone kin were called Sosoniammü Kwinawen (Kuinawen) Nangkwatün Nümü ("Shoshoni speaking northwards people").

In the Indian Entities Recognized and Eligible To Receive Services From the United States Bureau of Indian Affairs periodically listed in the Federal Register, their name is presented as "Timbi-Sha", but this is a typographical error and ungrammatical in Timbisha. The tribe never hyphenates its name. Both the California Desert Protection Act and the Timbisha Shoshone Homeland Act spell their name correctly.

The tribe has a website with photographs, history and historical documents, starting with its 1863 treaty. Tribal government has offices in Bishop, CA. A large collection of baskets made by tribal members is in the Eastern California Museum in Independence, CA.

Harold Driver recorded two Timbisha subgroups in Death Valley, the ″o'hya″ and the ″tu'mbica″ in 1937.

Julian Steward identified four ″districts″ with bands (süüpantün) each led by a headmen or pokwinapi, made up of several family groups (nanümü, pl: nanümüppü) each, were traditionally linked by economic and kinship relationship (the highest population of the Timbisha was in the Little Lake Band area). The "districts" were commonly named after the most important village (katükkatün) that characterized the area (kantün - "possessing, characterized by [a special village]") and the bands were also named after the village name they occupied (-tsi - "people of such a place"); therefore the family groups living at the "Ko'on" village were known as "Ko'ontsi" ("People at the village Ko'on") and their "district" therefore was called "Ko'ongkatün" (Ko'on + kantün - "possessing, characterized by" the village Ko'on, i.e. Saline Valley People).

Retrieved from "https://en.wikipedia.org/w/index.php?title=Timbisha&oldid=997936346"
Uses material from the Wikipedia article Timbisha, released under the CC BY-SA 3.0 license.