Haloarchaea (halophilic archaea, halophilic archaebacteria, halobacteria) are a class of the Euryarchaeota, found in water saturated or nearly saturated with salt. Halobacteria are now recognized as archaea, rather than bacteria and are one of the largest groups. The name 'halobacteria' was assigned to this group of organisms before the existence of the domain Archaea was realized, and while valid according to taxonomic rules, should be updated. Halophilic archaea are generally referred to as haloarchaea to distinguish them from halophilic bacteria.

These microorganisms are members of the halophile community, in that they require high salt concentrations to grow, with most species requiring more than 2.0M NaCl for growth and survival. They are a distinct evolutionary branch of the Archaea distinguished by the possession of ether-linked lipids and the absence of murein in their cell walls.

Haloarchaea can grow aerobically or anaerobically. Parts of the membranes of haloarchaea are purplish in color, and large blooms of haloarchaea appear reddish, from the pigment bacteriorhodopsin, related to the retinal pigment rhodopsin, which it uses to transform light energy into chemical energy by a process unrelated to chlorophyll-based photosynthesis. 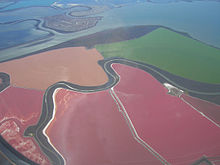 Salt ponds with pink colored Haloarchaea on the edge of San Francisco Bay, near Fremont, California

Haloarchaea require salt concentrations in excess of 2 M (or about 10%) to grow, and optimal growth usually occurs at much higher concentrations, typically 20–25%. However, Haloarchaea can grow up to saturation (about 37% salts).

Haloarchaea are found mainly in hypersaline lakes and solar salterns. Their high densities in the water often lead to pink or red colourations of the water (the cells possessing high levels of carotenoid pigments, presumably for UV protection). Some of them live in underground rock salt deposits, including one from middle-late Eocene (38-41 million years ago). Some even older ones from more than 250 million years ago have been reported.

Haloarchaea can grow at an aw close to 0.75, yet a water activity (aw) lower than 0.90 is inhibitory to most microbes. The number of solutes causes osmotic stress on microbes, which can cause cell lysis, unfolding of proteins and inactivation of enzymes when there is a large enough imbalance. Haloarchaea combat this by retaining compatible solutes such as potassium chloride (KCl) in their intracellular space to allow them to balance osmotic pressure. Retaining these salts is referred to as the “salt-in” method where the cell accumulates a high internal concentration of potassium. Because of the elevated potassium levels, haloarchaea have specialized proteins that have a highly negative surface charge to tolerate high potassium concentrations.

Haloarchaea have adapted to use glycerol as a carbon and energy source in catabolic processes, which is often present in high salt environments due to Dunaliella species that produce glycerol in large quantities.

Bacteriorhodopsin is used to absorb light, which provides energy to transport protons (H+) across the cellular membrane. The concentration gradient generated from this process can then be used to synthesize ATP. Many haloarchaea also possess related pigments, including halorhodopsin, which pumps chloride ions in the cell in response to photons, creating a voltage gradient and assisting in the production of energy from light. The process is unrelated to other forms of photosynthesis involving electron transport, however, and haloarchaea are incapable of fixing carbon from carbon dioxide. Early evolution of retinal proteins has been proposed as the purple Earth hypothesis.

Haloarchaea are often considered pleomorphic, or able to take on a range of shapes—even within a single species. This makes identification by microscopic means difficult, and it is now more common to use gene sequencing techniques for identification instead.

One of the more unusually shaped Haloarchaea is the "Square Haloarchaeon of Walsby". It was classified in 2004 using a very low nutrition solution to allow growth along with a high salt concentration, square in shape and extremely thin (like a postage stamp). This shape is probably only permitted by the high osmolarity of the water, permitting cell shapes that would be difficult, if not impossible, under other conditions.

Haloarchaea have been proposed as a kind of life that could live on Mars; since the Martian atmosphere has a pressure below the triple point of water, freshwater species would have no habitat on the Martian surface. The presence of high salt concentrations in water lowers its freezing point, in theory allowing for halophiles to exist in saltwater on Mars.

Retrieved from "https://en.wikipedia.org/w/index.php?title=Haloarchaea&oldid=1007969454"
Uses material from the Wikipedia article Haloarchaea, released under the CC BY-SA 3.0 license.