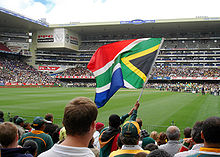 The Newlands Stadium, currently referred to as DHL Newlands for sponsorship reasons, is located in Cape Town, South Africa. The stadium currently has a capacity of 51,900 people, but is not an all-seater venue.

Various sports teams currently use the stadium as their home base, including:

Tenants Stormers finished in first place in the 2012 Super Rugby season for the first time in their history. Western Province also use the venue for home games. The city's soccer clubs Ajax Cape Town, Santos and the dissolved club Vasco da Gama have in the past occasionally hosted matches at the Newlands Stadium.

The decision to buy the ground the stadium stands on was made by the Western Province Rugby and Football Union in 1888. The first official match at Newlands took place on 31 May 1890 when Stellenbosch defeated Villagers there in front of a crowd of about 2,400 people. The following year the stadium hosted its first rugby test when the British Lions toured South Africa.

It was not until 1919 that the first permanent concrete stands were erected on the grounds. Later, in 1927, the new grandstand was erected and the field layout was changed to run from north–south. Yet more changes came in 1931 when the South stand was also enlarged.

In the 1950s parts of a new grandstand as well as South stand were completed, facilities such as lifts and a Presidential room were added, a fourth bay was added to the grandstand, and an extension was added to the lower gallery.

The 1970s saw the stadium change once again as the headquarters of SA Rugby moved to Newlands, and several stands were built or renovated, while the 1980s saw private suites and function rooms erected on top of the North stands as well as demolition of the old South stand and inauguration of the new Danie Craven stand (also with private suites and function rooms). The 1980s also saw 10,253 seats added to the stadium.

Between 1990 and 1995 the stadium was under constant renovation, adding technology, increasing capacity, and upgrading facilities, as part of a 3-phase redevelopment plan in anticipation of the 1995 Rugby World Cup, when Newlands hosted the opening match of the tournament.

After the World Cup, development continued with several redevelopment and expansion projects to make the stadium more modern and increase capacity. Currently there are four main stands at Newlands: the all-seated Grandstand and Railway stands along both sidelines, and the Danie Craven and Jan Pickard stands behind the goals. Both of the end stands feature many of the ground's corporate boxes: the Craven stand also has a large standing terrace area, while the alcohol-free Pickard stand is mostly seating while also playing home to the stadium's video screen.

The stadium's name was changed several times by various sponsors, first from Newlands to Norwich Park Newlands in 1996, then to Fedsure Park Newlands in 2000 due to a merger between Fedsure and Norwich, and finally back to simply Newlands by Investec when they became the main sponsor in 2002. In late 2005, Vodacom became the stadium's main sponsor, but followed Investec's precedent and kept the stadium name as Newlands. However, since 2011 the ground has been known as DHL Newlands after Western Province and the Stormers changed sponsors.

It was speculated that WP rugby would sell Newlands, and that the Stormers and Western Province would play their home matches at the newly built Cape Town Stadium for their home games. However, the Western Province Rugby Union have decided that they will not be using the stadium, but will rather remain at Newlands. This changed in 2020 when it was confirmed that the stadium would be sold to Investec and demolished in 2021 for residential and retail developments to be built.